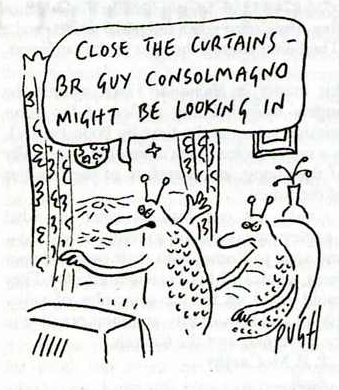 The Tablet has even run cartoons about me…

(This column first ran in The Tablet in November, 2007)

I have a new [in 2007] book just published, and so I have been on “book tour” for the past month. The audiences have ranged from a friendly group at the Thomas More Center of Yale University, to a lively group who’d come for an argument at the New York City Public Library of Science, Industry, and Business.

The highlight so far has been a three-hour interview on a popular American radio program, “Coast to Coast.” It broadcasts live from 2 am to 5 am (east coast time), which meant I had to stay up with a telephone at my ear during the wee hours of the morning. That was in fact no problem, since I did the interview while observing trans-Neptunian objects with the Vatican’s telescope in Arizona. While my colleagues kept track of our targets, I spoke to America’s insomniacs.

The show is infamous for treating in utter seriousness topics like ghosts, space aliens, and speaking to the dead. I wondered at first if my presence there would be equating my astronomy, and my religion, with crop circles and ouija boards. Clearly it was beneath my dignity to appear in such a gathering. So of course, I had to do it!

There was an hour for call-in questions after my presentation; and over the next week listeners continued to e-mail me their comments and queries:

My girlfriend wants to know if her dog can go to heaven.

I wonder if “many mansions” could be reasonably translated to also mean, “in my Father’s universe are many planets.”

I have had many strange dreams and forebodings lately.  I’m unable to tell if it is from listening to Coast to Coast too much or if the landscape of  our times is indeed changing for the worse.

Have you been able to detect any layers of subtle energy?

You gave an interview on Coast to Coast which my husband heard.  He may have been asleep while listening… and heard something about chakras and spaceships… but maybe that wasn’t you.

Since I am an astrologer, I looked at your birth date and saw that the position of Mercury when you were born was at the mid-point in the sky between Pluto and Neptune.  Have you ever studied astrology at all?

You have contorted God’s word, and put them through the meat grinder of your own pathetic venal, carnal, earthly, ugly, and secular misinterpretations.

Most of the responses were more encouraging that that, however. A small number of people actually did ask me about the topics on which I can claim expertise. As one listener told me, “Please don’t be discouraged by the inexplicable lack of real questions on astronomy from the audience that night. There are people with scientific curiosity out here. ”

Indeed, I think the best question of the night came from a listener who had heard our discussion of why Pluto is no longer called a planet. I’d explained how Pluto’s discovery had been the result of predictions to explain perturbations in Neptune’s orbit, and that, as the caller put it, “they apparently hung a sign on the first rock they found and quit looking.” But Pluto turned out to have far too little mass to account for the original Neptune anomaly; it’s not the planet they were looking for. So the caller asked, quite reasonably: “Is there still an unexplained Neptune anomaly?”

In fact, there isn’t. The anomalies turned out to be merely subtle errors in tracking Neptune’s orbit. But over-eager astronomers read too much into these nonexistent excursions… reminiscent of many of my callers’ reactions to my interview.

My book is called God’s Mechanics: How Scientists and Engineers Make Sense of Religion. It has nothing to do with dogs, chakras, or Pluto.