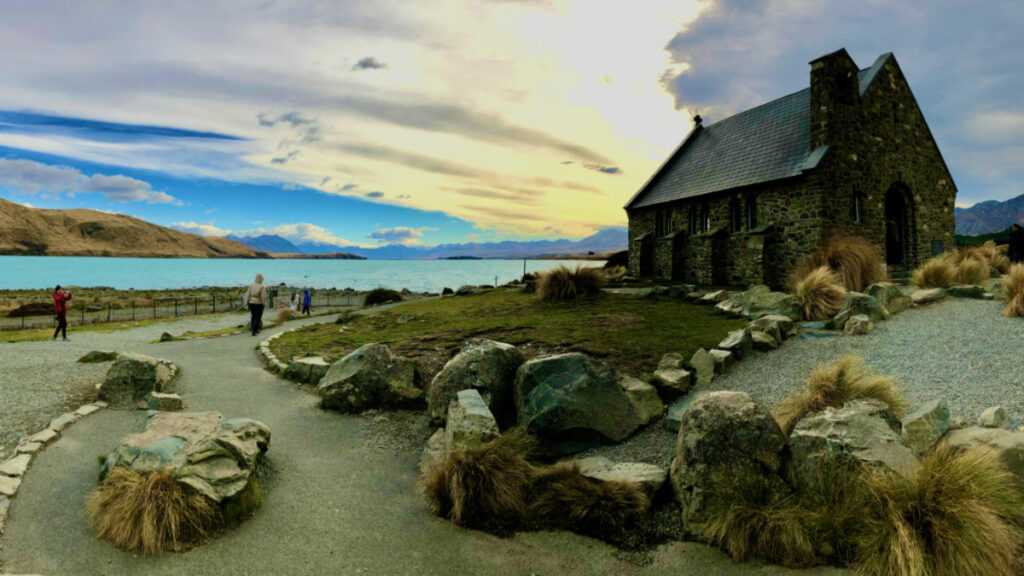 This column was originally published in The Tablet in May, 2019

It was a dark and stormy afternoon on the shores of Lake Tekapo, New Zealand. In 1997 I had visited this village to see southern stars with my little telescope; I’d brought that telescope back with me this time, hoping to repeat that magical week. But the weather would not cooperate.

A cardinal, an imam, and a prime minister…

My trip to New Zealand was sponsored by the Catholic Enquiry Centre. For two weeks they shuttled me around the country, speaking at a dozen different locations from Dunedin to Auckland. My audiences included a former a prime minister, a cardinal, an imam, and lots of school kids. They all had great questions.

Our trip to Tekapo was sponsored by the Diocese of Christchurch; Bishop Paul Martin was hosting a group of laypeople working to raise money to rebuild the Catholic cathedral, severely damaged during the 2011 earthquake. (While in Christchurch I also saw the half-destroyed Anglican cathedral in the town square, and spoke to supporters rebuilding the old astronomy tower at what is now the Arts Centre.)

That evening a local astro-tourism business, Earth & Sky, [now called Dark Sky Project] brought our group up to the Mt. John Observatory outside Tekapo to see telescopes not-in-action under the cloudy skies. The bad weather meant we could get a full tour of the facilities without disturbing the astronomers.

The biggest telescope on site has a 1.8 meter wide mirror (the same as the Vatican’s telescope in Arizona) funded by a Japanese team who are looking for planets around other stars in the dense stellar regions of our galaxy’s center and the nearby Magellanic Clouds — best seen in this location, the most southerly spot of dry land with a good telescope short of Antarctica.

Astro-tourism is changing the face of Lake Tekapo. The village itself has perhaps 500 residents; but it draws thousands of tourists a year for hiking and fishing and now, as well, for stargazing. It sits in the middle of the Aoraki Mackenzie International Dark Sky Reserve, one of the best dark-sky areas in the world.

And its southern location means that tourists from the north, like me, can be treated year-round to sights unseeable from our latitude: the Southern Cross (and its neighbor, the Coalsack); the Eta Carina complex of light and shadow; the stunning globular clusters Omega Centauri and 47 Tucanae; and of course, our nearest neighbor galaxies, the Clouds of Magellan. When the weather cooperates, of course.

They say that astro-tourism brings in millions of dollars to Lake Tekapo alone; a new astronomy visitor center opening later this year (I got a sneak peek) will bring in even more visitors. It’s been my privilege to visit a number of these gold-star level sites, both north and south. (There’s a wonderful site in Kerry, Ireland, with a great view not only of the skies but of the Skellig Islands featured in recent Star Wars movies.)

Astronomy feeds the local economy. It also feeds our souls. It reminds us that the universe is bigger than our daily concerns, and like prayer it pulls us out of ourselves and connects us with the transcendent. We know the stars are there, even when clouds or our worthless human lighting hide them from us.

Stepping outside the Mt John telescope domes that night, the skies looked suddenly different. The wind had blown the clouds away. I stood enraptured beneath the stars I had traveled so far to see.

196  |  Across the Universe: Galileo’s Jesuit Heirs