This article from The Tablet was first published in June, 2005, thirteen years ago, just before the “Deep Impact” probe hit. (And rerun here in 2015.) It’s interesting to see what we were hoping to learn… how little we knew; how little we know. 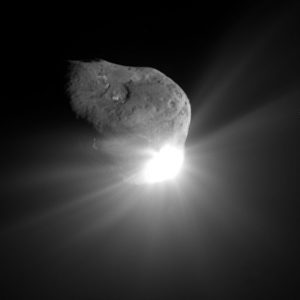 The folks who work out the celestial mechanics of space probes are a clever bunch, with a techie’s sense of humor. A few years ago, the NEAR spacecraft arrived at asteroid Eros on Valentine’s Day. The ill-fated Beagle 2 probe was designed to land on Mars on Christmas morning (not the only present that Christmas to arrive broken, I suspect). And this year [2005], on the Fourth of July, an American probe called “Deep Impact” hopes to make a splash as dramatic as any fireworks display by plunging at 37,100 kilometers per hour – London to New York in nine minutes – into the nucleus of the comet Temple 1.

Before the space age, all one could see of a comet were its spectacular tails of gas and dust. Obviously those tails must emanate from some dusty and gas-rich clump of material. The tails appear only when that nucleus comes close to the Sun, and they repeat over many apparitions; so presumably, far from the Sun, the gas was frozen as ice. Thus when ESA’s Giotto spacecraft approached Comet Halley in 1986, they expected to see a nucleus that looked like a “dusty snowball.” Instead, what they saw was a jet-black lump.

But of course… as the ice evaporates away, it must leave behind a crust of dust. To see the ice, what you’d need to do is poke through that crust. In the process, you’d probably expose a huge amount of fresh ice and create a spectacular fountain of gas and dust, easy to observe from a nearby spacecraft and indeed probably quite visible from Earth.

That was the idea behind the first comet-impactor proposal in 1996. Improved, with a way to steer the impactor into the comet and a name taken from a Hollywood blockbuster, NASA funded “Deep Impact” in 1999.  After the usual trials and delays, it finally launched in January, 2005. Except for a few camera glitches, all seems well for the spacecraft on its way to its Independence Day encounter.

It takes six years to build a spacecraft mission to a comet. But it only takes a few pictures, and a few calculations, to change our ideas of what a comet really looks like. Today’s theoretical picture suggests that the comet imaged by Deep Impact’s cameras could look a lot different from what they expected in 1999.

For one thing, comparing the densities of asteroids with the meteorites that come from those places (including work I’ve done with the Vatican collection) shows that these small solar system bodies are not solid chunks of material but very loosely packed piles of rubble. Meanwhile, other spacecraft (Deep Space 1 and Stardust) have sent us images of comet surfaces that suggest the the dark, ice-poor crust could be quite thick. There’s plenty of cracks for all but the deepest gases to escape, and most of the comet tails seen today come out of only a few small regions of the nucleus’ surface.

So the impact could be a big “dud” – poking a dimple into the side of the comet without revealing anything new. Some wags have even suggested that the probe might pass entirely through the loose comet core and come out the other side! That’s not likely; this comet is about ten kilometers thick. But it is possible that rather than exploding on its surface, the impactor might be captured intact. Such a result might not make a spectacular show, but it would be very interesting to the scientists.

Until the impact occurs, we just won’t know. And even as these questions are answered, new ones will arise. Compared to 1999, we now know better how little we knew about comets when the mission was planned. The more you learn, the more you realize how little you know.

[Note from 2015: The impact was neither a dud, nor quite what we expected. It did not plow entirely through the comet! In fact, the impact produced so much light that it momentarily blinded the cameras, so that at the time we didn’t see the impact crater. Only several years later did another probe, the one sent to comet Wild 2, manage to get images of the small but real crater produced by Deep Impact.

It took a long time to finally reduce and understand the data from Deep Impact. Here is a summary of its results, written in 2013. In the same way, it will take years to understand the Rosetta mission that landed a probe much more gently on a comet, late last year, or the results soon to come from New Horizons.]

191  |  Across the Universe: Looking overhead