This column first ran in The Tablet in October 2017 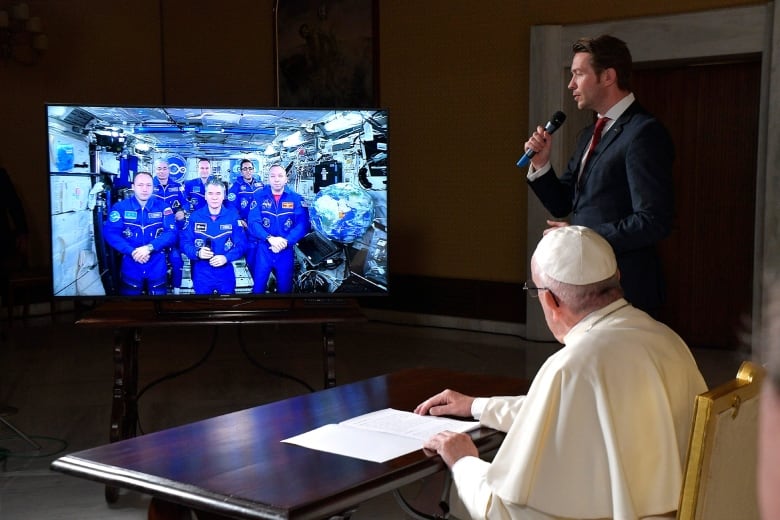 The Pope chatting with astronauts on the Space Station. Whoever held the camera there, had to decide which way was “up”.

Studying the universe forces us to see ourselves in a new and often disorienting context. It’s not always easy. Talking with astronauts aboard the International Space Station on October 26 [2017], Pope Francis asked them, “traveling in space, thinking about things we take for granted here on Earth like the concept of “up” or “down”… tell us, is there something in particular that has surprised you, living in the Space Station?” The American astronaut Mark VandeHei replied, “in this environment, where we really don’t need the concept of up and down, to get my bearings I still have to decide which direction to perceive as up.”

Every day in my meteorite lab I work with rocks that have passed through the sky (“meteorite” comes from the Greek word for sky), tangible evidence that the clouds are not an impenetrable barrier between us and rest of the solar system. We can touch pieces of other planets; they can touch us. Having astronauts in orbit only reinforces that realization.

This month, a new visitor has pushed our sense of connection to the universe even further. On October 19 [2017], a researcher at the Pan-STAARS survey telescope in Hawaii, Rob Weryk, found a comet (albeit one without a tail) first designated as A/2017 U1. Then, after tracing its position on earlier Hawaii images and comparing results with his colleague Marco Micheli at the ESA telescope on Tenerife, they were able to calculate its orbit…

Now, ever since Johannes Kepler we’ve known that objects in our solar system don’t orbit the Sun in perfect circles, but rather in ellipses. A circle is simply an ellipse with zero eccentricity; values of eccentricity greater than zero indicate orbits that are like ovals, more and more stretched out as eccentricity grows, until the ultimate case of eccentricity equal to one gives you just a straight line. Obviously that no longer describes an orbit around the Sun, but an object falling straight into it. 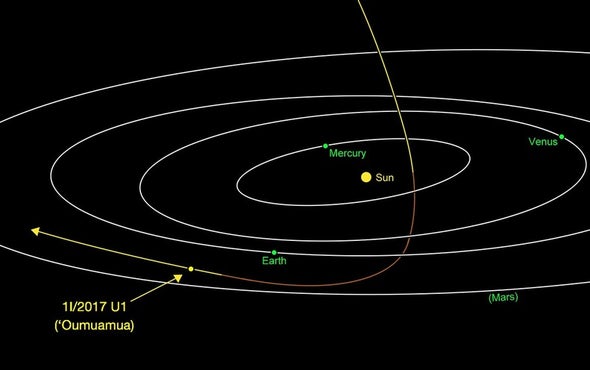 A tracing of the interstellar visitor’s orbit, from a Scientific American article

Tracing the path of A/2017 U1, however, an eccentricity of 1.2 has emerged from the calculations. Eccentricity greater than one? What does that mean? It means, this object is not from anywhere around here. It is a visitor from another solar system… the first such we have ever detected.

Could it have started out in our own cloud of comets, far beyond Pluto? No; to reach its speed — topping out at nearly 90 kilometers per second — would require it to have been perturbed by something moving faster than any solar system object out there could move.

Is it going to hit the Earth? No; in fact, it had already passed us before we noticed it. It made its closest approach to the Sun, inside Mercury’s orbit, back on September 9, and passed by Earth’s orbit on October 14. We could only see it after it passed us, with the Sun now behind us as we looked.

Do we really know if it is a comet? No; it just might be a lump of rock. We’re rushing to observe it now as best we can, but it is small (about a quarter mile in diameter) and faint… getting fainter every day as it exits our solar system.

Still, our hope is that detailed spectra might tell us if it is covered in exotic chemicals from its time in interstellar space, or just the same minerals we find on Earth. Of course, “normal” or “exotic” has as much meaning in the greater universe as “up” and “down.” We can only compare against what seems ordinary to us.

Incidentally, some call a comet without a tail, a “Manx” comet.

[The latest word on this visitor, now designated I1 2017/U1 and named ‘Oumuamua… looking at archived images from the ESA Gaia space telescope mapper has revealed the location of this body before it was discovered; with this extra information, a team of astronomers led by Coryn Bailer-Jones at the Max Planck Institute for Astronomy has suggested a small number of possible stars that it may have come from… or at least, passed near before it entered our system.]

15  |  Across the Universe: The Impact of Asteroids

18  |  Across the Universe: Hidden Complications