This column first ran at the end of May, 2018, in The Tablet. Why I wound up with two columns in May that year is mysterious to me…

The summer of 2018 marked the 200th birthday of Father Angelo Secchi, the Jesuit priest often called the Father of Astrophysics. In May I participated in a celebration of his work held in his home town of Reggio Emilia, northern Italy. Speakers covered topics drawn from his life and career, starting with a wonderful biographical sketch by Ileana Chinnici, a historian of astronomy at the Palermo Observatory (and an adjunct Vatican astronomer). 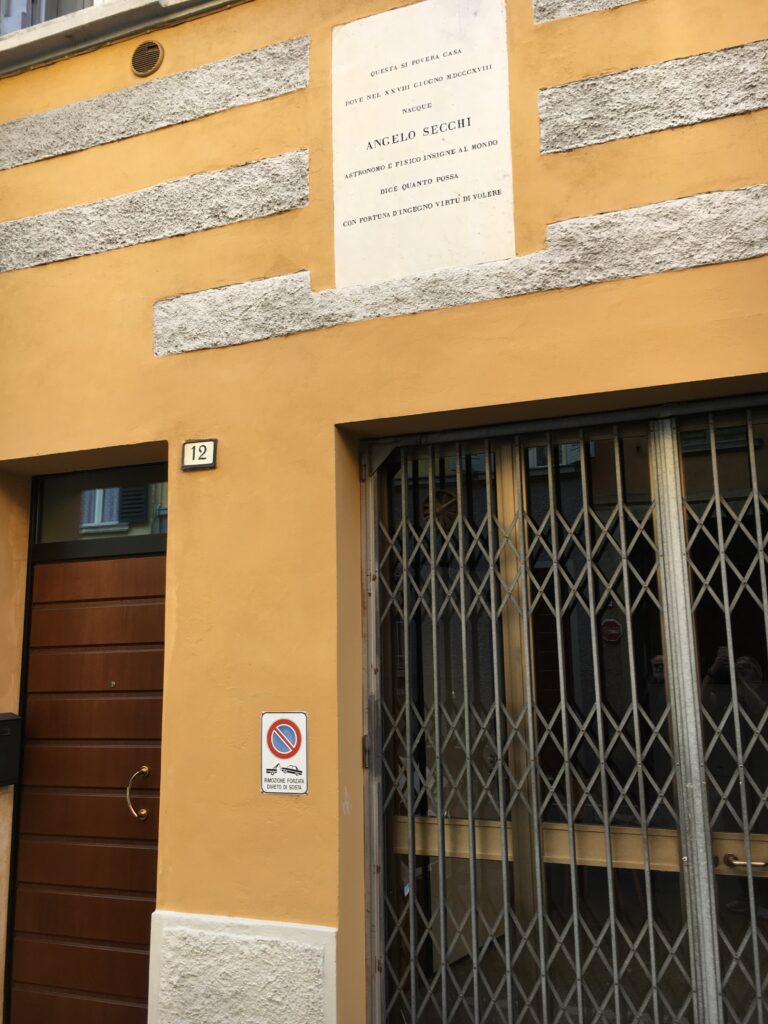 Secchi’s birthplace in Reggio Emilia, Italy, is marked by a plaque. It does not mention that he was a Jesuit priest.

Like Galileo, Secchi had a knack for the popularisation of science, and for becoming embroiled in political controversy. The revolutions of 1848 forced Secchi to flee Rome for two years – he spent the enforced sabbatical at Stonyhurst College and at Georgetown University – and he was nearly forced to leave again after 1870 by the manoeuvrings of enemies in the anti-clerical Italian government.

Before Secchi, astronomy had been little more than the study of the positions of the stars and planets and the calculation of their orbits. It had more or less meant working in the same way as Tycho Brahe and Kepler had been doing back in the 16th and 17th century (and indeed in ways pioneered by the ancient Greeks, Hipparchus and Ptolemy). That had had a very practical purpose: the ancients wanted to be able to predict planetary positions in order to improve their astrology, while the national observatories of Secchi’s time wanted more accurate star positions for better navigation.

Secchi was the first person to think about those lights in the sky as places with their own compositions and histories. Others had noted that the colours of sunlight could tell us about the Sun’s chemical composition; Secchi used this technique, spectroscopy, to measure the spectra of thousands of stars, looking for patterns and ways to classify them.

It was known that Mars makes an especially close approach to Earth every 22 years or so, but no one before Secchi had bothered to actually try to inspect the surface of Mars and make sense of its markings. Secchi’s work inspired the pioneer maps of Mars made by Giovanni Schiaparelli after the next favorable conjunction, 22 years later. Schiaparelli and – infamously – the American businessman and astronomer Percival Lowell, borrowed Secchi’s term canali (“channels”) to describe “canals” that later turned out to be optical illusions. By contrast, the features that Secchi described as canali are real.

The comparison of Secchi with Galileo could be extended to their combative personalities. Each made enemies in the turbulent political times in which they lived. Secchi was subject to no shortage of slander, and English translations of his most important works were suppressed by some English scientists (such as Norman Lockyer, founder of the journal Nature), who perhaps did not want to reveal how much of his work anticipated their own. For that reason alone, the celebration of the bicentennial of Secchi’s birth in 2018 offers a wonderful opportunity to rectify that slight. It is also a welcome chance to introduce the world to a fascinating and colourful character.

One final comparison: Galileo died quietly in his home in Arcetri, at the age of 78. Secchi died at the much younger age of 59, his health worn down by the stresses of his travels and his political fights. Of course, had Galileo died at 59, he’d never have had to endure his infamous trial.

2  |  Across the Universe: The competent man