Fourteen years ago this month, Pope John Paul II died and Pope Benedict XVI was elected. I wrote this column in reaction to those events; it appeared in the Tablet in April, 2005. We republished here in 2015, the tenth anniversary of the event.

For twelve years [as of 2005] I have been an astronomer at the Vatican Observatory, one of a dozen Jesuits who are guests of the Pope at his summer home in Castel Gandolfo. And as an astronomer I observed John Paul II: occasionally in close encounters, more commonly from a distance… brief glances, an amplified voice resonating through the window of my room overlooking Wednesday audiences, Sunday Angelus prayers, and Mass for a thousand different groups of visitors.

Our orbits rarely intersected. At Castel Gandolfo, our living quarters and offices are under the same roof as the Pope’s, but in fact our paths (like our hallways) rarely intersect. He’d have the Jesuits over for Mass on July 31, the feast of St. Ignatius Loyola. He personally greeted our summer schools of young astronomers. On other rare occasions we might be invited to join a morning audience.

He made a point to thank everyone working at Castel Gandolfo in person at the end of each summer stay. During one such audience, at the end of September, 2001, I had my most memorable encounter with him. He had just returned from Kazakhstan, where he had traveled immediately after the September 11 attacks. I was perhaps one of the first Americans to speak with him after those tragedies, and I thanked him for his prayers and work for peace. He, in turn, reassured me of his love and care for my country. It was a moving, if brief, conjunction. 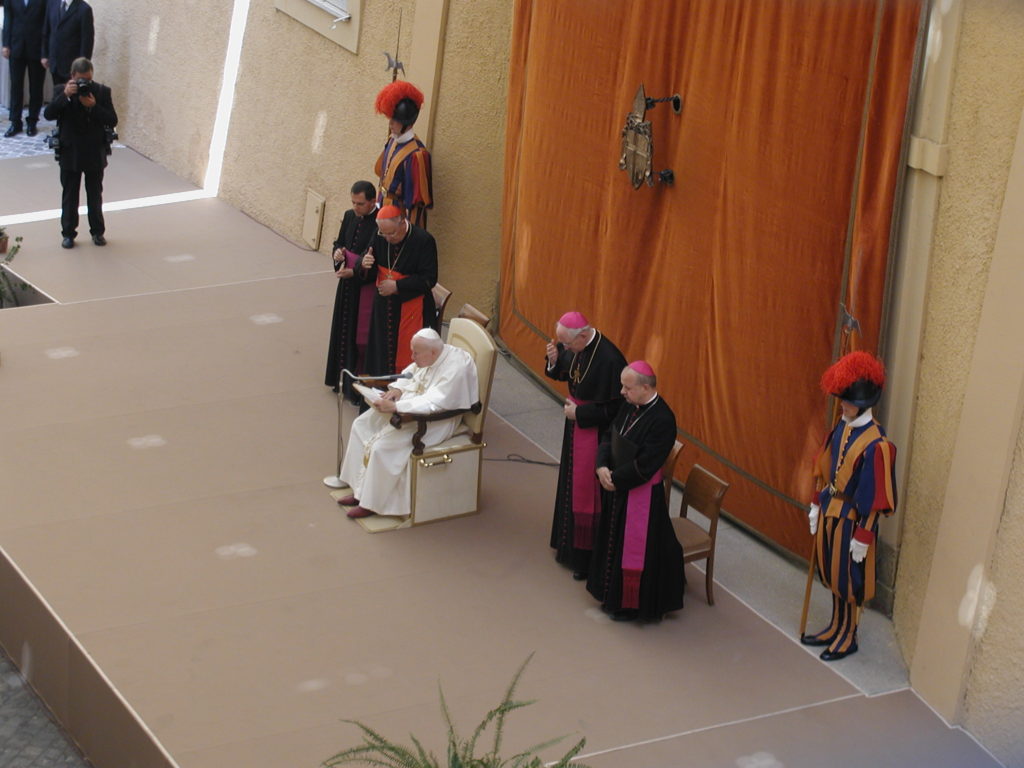 Back when we lived in the Papal Summer Palace, I could see the Sunday angelus prayers from my bedroom window. That’s where this photo was taken.

Even just shaking his hand a few times every summer and seeing him out my window, I did have a privileged view for nearly half of his papacy. The most striking observation was seeing how, the weaker he became physically, the stronger was the spiritual power he radiated. The last years of his life, his mere presence – fiery eyes set in a bent and withered frame – could melt even the most cynical heart in the crowds. Extrapolating this trend to his death, it is no surprise that just his corpse moved millions.

The events of this past month [2005] have taken place at a time when my own orbit has pulled me far from Castel Gandolfo. In California, where I am taking part in a special period of Jesuit study and research, I have observed John Paul’s passing and the election of Pope Benedict XVI… a name that someday will not look so strange upon the page.

I find myself playing all the games of someone wondering what the new boss will be like. How will he affect my own life and work? Will his ascension mean changes in the leadership of my Jesuit order, or my community in Rome? Should I be brushing up my German?

As a Cardinal, Ratzinger-now-Benedict was a controversial figure. A super-Catholic friend of mine in Houston, Texas, who works in the meteorite lab at the Nasa Johnson Space Center, is such a fan of his that she’s baked him cookies and mailed them to Rome. Has he ever gotten them? Or noticed who sent them? Will that translate into good will for my meteorite work at the Observatory? I wonder if he’ll be interested in coming downstairs to visit my lab… and if I should I have cookies ready, in case he does.

The utter silliness of these calculations is their best antidote. The Vatican Observatory has served nine Popes since its modern incarnation in 1892, and our tenth Pope is, like John Paul II and the others before him, an intellectual who can appreciate our work.

Beyond that, my real boss is The Holy Spirit. Neither the truths of science, nor of religion, depend on the person or personalities of their acolytes. The only thing that matters is how faithfully we serve those truths.

(added in 2015… our relationship with Pope Benedict was wonderful, and this has continued under Pope Francis. The major change that occurred under Pope Benedict was that we’re no longer living in the old Papal residence; we were given magnificent new quarters in the gardens nearby. Pope Benedict opened them in person, and he did indeed come to visit my meteorite lab.

And Pope Francis no longer stays in the old Papal residence, either; it’s a museum now. He visited us for lunch in 2013, though, and also visited the meteorites.)

28  |  Across the Universe: Limits to Understanding

31  |  Across the Universe: Seeing the Light