This column first ran in The Tablet in May 2018

Compared to the student riots and political assassinations of 1968, the United Nations Conference on the Exploration and Peaceful Uses of Outer Space that year caused relatively little stir. Back then, of course, only two nations were in any position to explore or use outer space. It was easy for the rest of the world to give lip service to the ideal that the space resources were the heritage of all humankind. Fifty years on, though, things are changing.

In June, 2018, the UN’s Office of Outer Space Affairs held a fiftieth anniversary meeting: UNISPACE +50. To set the stage, the organizers decided to hold a small workshop where their diplomats could meet informally with scientists and engineers active in understanding how we’ll be using space resources, from satellite data to actual asteroid mining, in the near future. They asked the Vatican Permanent Mission to the UN for help organizing this workshop; and so during Holy Week it was our pleasure to host some three dozen scientists, diplomats, and astronauts at the Vatican Observatory headquarters in Castel Gandolfo. 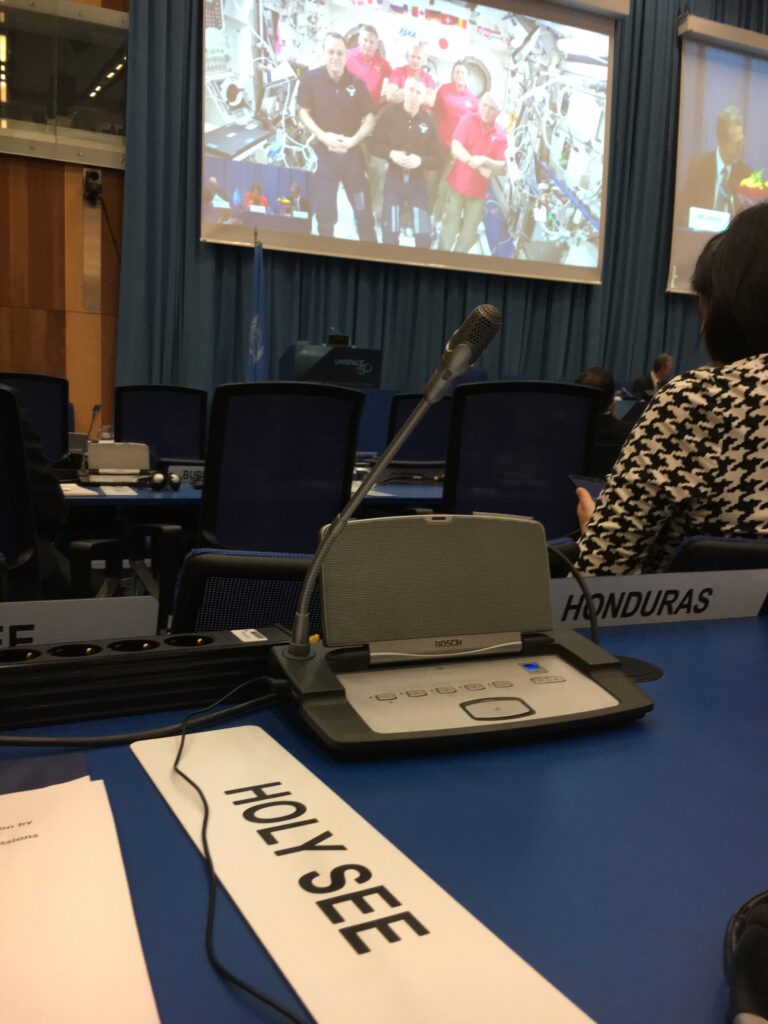 At the June meeting in Vienna, which I attended representing the Holy See, we chatted live with astronauts in the ISS. (The gizmo on the desk is the microphone/headphones for simultaneous translations. We didn’t have that back when I was doing Model UN in high school!)

The seminar was held under the “Chatham House Rule” where specific speakers and comments are confidential, but the general trend of the meeting can be reported. Among the surprises to me was the large number of nations, now approaching 90, who already have a space-exploration agency of their government registered with the UN. A dozen nations (and international entities like Esa) have put satellites into orbit; many more are building satellites to be launched by them. The biggest challenge for the future, however, may be the growing number of players who are not nations but rather multinational corporations (like Elon Musk’s Space X, and his interplanetary car stunt). How will their activities be regulated?

It’s to everyone’s benefit that the uses of space be coordinated. Though space seems limitless, in fact the regions where Earth satellites orbit is already getting crowded. Debris from failed satellites can damage other satellites. Even perfectly functioning satellites can interfere with each other. And while private industry is a boon when it comes to financing the uses of space, investors want some assurance that their returns — be it data or space minerals — are protected from piracy.

How can this coordination be organized? And even more critically, how can it be enforced? There are no systems so perfect that no one will need to be good (to quote T. S. Eliot), but it’s possible set things up in ways that encourage good behavior.

One way to encourage the nations of the world large and small (space industries are often incorporated in places like Luxembourg) to cooperate is to make as many people as possible stakeholders in the enterprise. You don’t have to have a rocket launcher to build a satellite; small “cubesats” are being constructed at universities from Cambridge to Kenya. And you don’t have to have your own satellite to have access to space data. Indeed, there is now so much data available that anyone with a modest computer can do valuable work to analyze and exploit that data. Many missions already rely on “crowd-sourced” science, enlisting thousands of individual enthusiasts to discover exoplanets or classify galaxies. The more people who feel like they own a bit of outer space, the theory goes, the more they will be willing to take care of it. 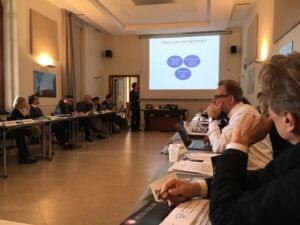 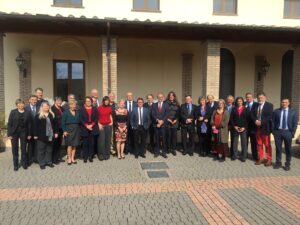 And the obligatory group photo of the March workshop attendees…

Spacefaring is still new. Its community (like the early Christian communities we read about in Acts this season) will experience both idealism and conflict. Perhaps, planning now might prevent 1968-style upheavals in 2068.