This column first ran in The Tablet in April 2016; this has been slightly edited. 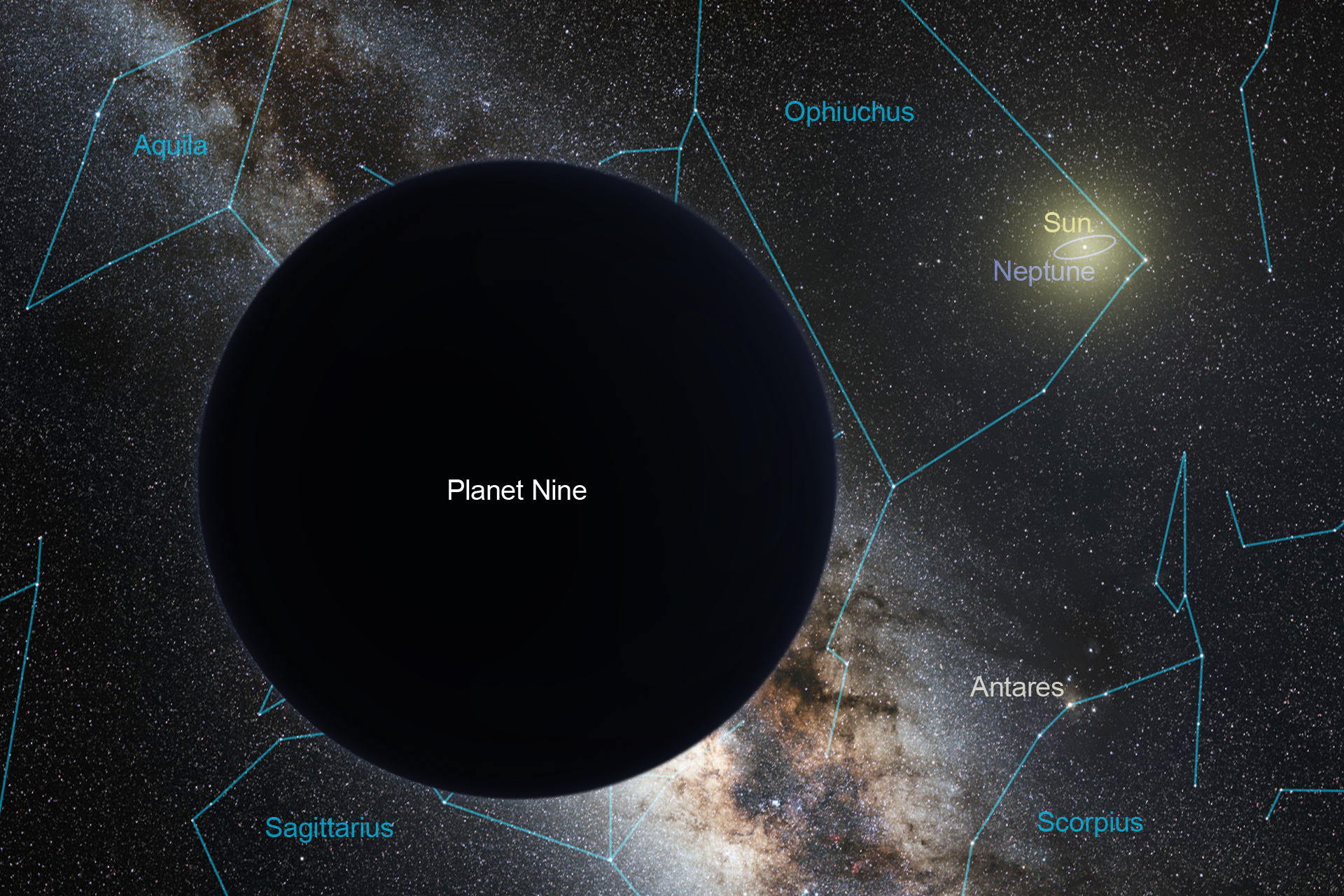 From Wikipedia, an artist’s impression of Planet Nine as an ice giant eclipsing the central Milky Way, with a Sun-like star in the distance. The sky view and appearance are based on the conjectures of its co-proposer, Mike Brown. Constellations and other features are labeled. Notice the small orbit of Neptune as shown.

Planet Nine, whose possible existence was first broached in January 2016, has become a hot topic of speculation. By April of that year, one tabloid announced that comets perturbed by Planet Nine would soon lead to the demise of life on Earth! (Astronomer Phil Plait ran an amusing rebuttal in The New Scientist.) But, is there actually a Planet Nine?

Recall, an Astronomical Unit (AU) is the distance from Earth to the sun. From the sun to Neptune, the farthest known planet, is 30 AU. Pluto is but one of a thousand balls of ice orbiting between 30 to 50 AU.

But in 2003, Mike Brown and his team at Cal Tech found a body they named Sedna whose orbit comes no closer to the Sun than 76 AU, and which actually arcs out to nearly 1000 AU. It’s hard to imagine how it could have been formed out there; more likely it was pushed there by the gravity of some other planetoid.

Now, there are two ironclad rules of celestial mechanics that apply here. First, any two bodies perturb each other with equal force, with the bigger change occurring to the smaller body; so the perturbing body has to be a lot bigger than Sedna to cause its wild orbit. And these two bodies must pass close to each other for their gravities to have an effect. If Sedna was perturbed by a bigger body, then that bigger body must also be out there orbiting where Sedna orbits.

That much was known in 2003. But by early this year, Brown had found five other bodies in huge orbits just like Sedna’s. Konstantin Batygin, a celestial mechanics whiz with a fast computer who works with Brown at CalTech, calculated that one and the same large body (they guess about ten times the mass of Earth) orbiting from 200 AU to more than 500 AU from the sun could be responsible for all of those wildly perturbed orbits.

If there is such a body, why haven’t we seen it? It must be faint and far away. It could well be orbiting now in a part of the sky we’ve never searched. Indeed, it might be sitting right in front (from our point of view) of the densest part of the Milky Way, its faint light hidden among a million other equally faint dots.

When I was a student, the idea of something ten times bigger than Earth orbiting out so far from our sun would have been laughed at. No rocky planet could be so big, or so distant. But now we’ve discovered systems of planets orbiting other stars, and from them we have learned that ten-times-Earth is a pretty typical size for planets. Furthermore, we’ve seen that such planets can indeed change their orbits by such great amounts, early in the histories of their solar systems.

In fact, we now think that Uranus and Neptune themselves were actually formed close to Saturn and then flung out to their current locations during the early history of our own solar system… maybe at the same time that smaller chunks rained inwards, peppering the Moon with its craters and covering the Earth with water and carbon-bearing ices. There’s plenty of room in our theories for another planet, say a big chunk of rock and ice, to be sent out to where Planet Nine is proposed to exist.

And notice a sweet theological echo to this proposal. We can’t see Planet Nine; not yet. But still, some believe it exists; because they can see the things that it has done, to the things that we all can see.

Note added in 2018: This hypothesized planet is still controversial… and not yet found. See a recent article about it here in the Atlantic…

175  |  Across the Universe: Recognition

178  |  Across the Universe: Black Hole Shadows