The e-mail came from the Fordham student who’s been working in the lab with me this term. “Some of the physics students have asked me to pass this on to you: they don’t want to admit it, but they’re totally lost.”

There’s only a couple of weeks left of my sabbatical year at Fordham. I had asked the physics department if I could teach the class on electricity and magnetism; when I learned this material myself as an undergraduate, it had changed my life. I wanted the opportunity to pass the joy on to some of the brightest kids I’ve ever taught. 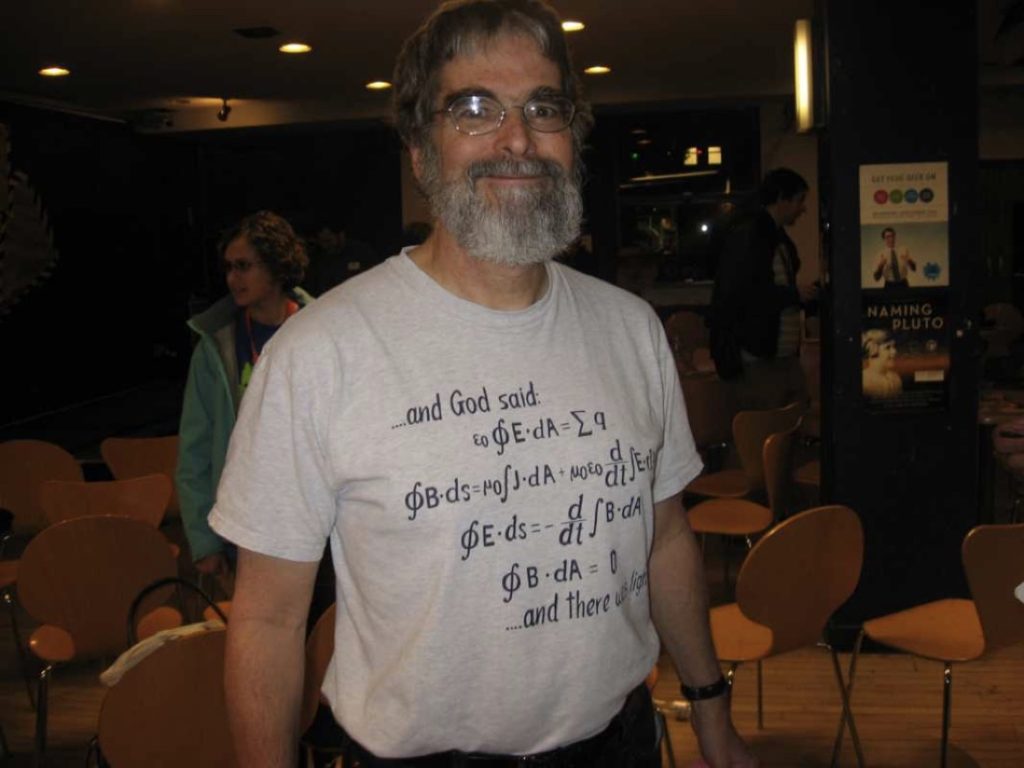 One of my favorite tee-shirts, featuring Maxwell’s Equations

They are totally lost? That’s no surprise; when I was a student, at this point I was lost too. The mathematics of electromagnetic fields has mystified science undergraduates even before Maxwell first summarized them with his famous equations. And the dizziness my students are feeling is nothing compared to how the world of physics felt when it finally understood what Maxwell was saying.

Other scientists, Ampere and Faraday and Coulomb and Gauss, had described mathematically how electric currents generate magnetic forces, and how moving magnets in turn create electric currents. Everyone knew that there was a connection between electricity and magnetism, even if no one knew why. The easiest shorthand way to calculate the way real objects are moved around by those forces was to invent a mathematical fiction called a “field” associated with any given physical arrangement of wires and charges. Insert a new charge or magnet into this “field” and you could quickly calculate how it, too, would be pulled about as a result.

I did that derivation on the board, and looked expectantly to my class.

Totally lost. Then one student’s eyes widenend. “Oh, my God,” he breathed. “It’s a wave.” 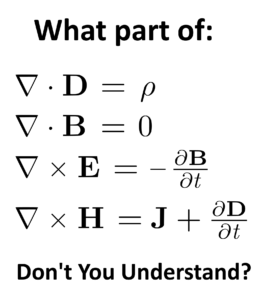 “Speed squared, actually. Work it out.”

“What travels like a wave, at the speed of light?”

Maxwell had shown that those mathematical fictions called fields were in fact the essence of what we see with our own eyes when we look at anything.

A changing electric field generates a changing magnetic field that generates a changing electric field, and the whole system propagates through space at the speed of light. That’s not only how light propagates; it’s also how radio waves are transmitted, how electrical energy is carried into our homes, how musical waves are carried by speaker wires to our iPod headphones. Everything electrical in our households is derived from these equations.

Even more, these equations led Einstein to realize the need for his theory of relativity, and eventually inspired the quantum revolution. (And relativity ultimately explains the connection between electricity and magnetism.) Before Maxwell shed light on the nature of light itself, the world of physics was indeed totally lost; we just didn’t know it.

It resonates with a familiar ring: fields, thought to be “symbolic”, turn out to be real, just as the resurrected Christ shows himself not symbolically but actually alive, really the son of God, propagating his message through the emptiness of time from then to now. And we need to realize that we’re totally lost, before we can begin to see.

(If you want to read more about light, and Maxwell, you can download a pdf of my little book The Way to the Dwelling of Light from here, on the Vatican Observatory Foundation website.)

32  |  Across the Universe: Truth, Beauty, and a Good Lawyer