This article was first published in The Tablet in December, 2005. I also ran it a year ago on this blog, before many of you became regular readers… and before I knew how to embed pictures. So I am running it again, with pictures this time. 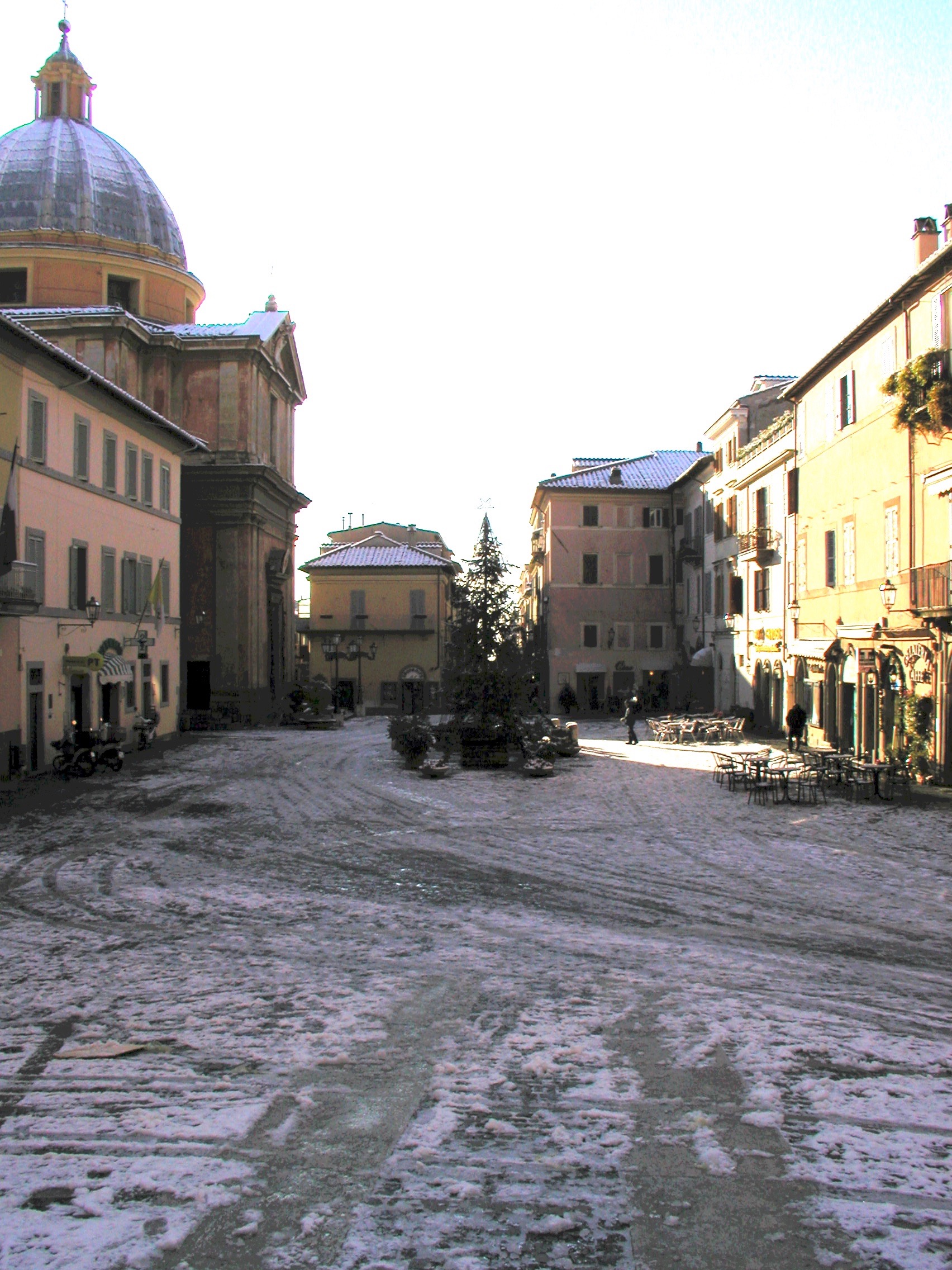 It doesn’t snow often in Castel Gandolfo; but it did in December 2005, when this column was written. The dome of St. Thomas church (a Bernini design) is visible on the left.

Every December, along with the Christmas rush and the endless round of holiday parties, planetary astronomers have another deadline facing them: the annual Lunar and Planetary Science conference. The meeting is in March; the deadline for submitting papers is early January. [For 2016, it’s January 12.]

It’s challenging enough to write up results on deadline; but what is harder, is that really you ought to have some results worth writing up. My last month has been a scramble as I try chasing after the faintest wisp of an idea to see if it has enough substance to talk about in front of a thousand highly critical peers.

Lately [this was 2005] we’ve been observing Centaurs, objects so named because they’re half comet, half Kuiper Belt Object. Their orbits look like they originated out beyond Neptune and Pluto, but they are now traveling in eccentric paths that intersect the orbits of the major planets and will some day be deflected into the inner solar system, where their ices will boil away into the long streams we call comet tails.

Some of them are seen to get systematically brighter and fainter over a few hours, implying that they are elongated objects showing us a broad side and a narrow side as they spin. But there’s an interesting connection between spin and shape: the spin wants to pull the object into an elongated shape, while gravity acts to counter that pull. And the innate strength of the body resists both. Measuring elongation against spin, you could in theory get some idea of how dense, or how strong, the body is. Actually coming up with real values for strength and density is much messier than I’ve just made it sound, however.

My idea for a paper to submit to this meeting is to talk about some of the asteroids and small moons that we’ve already got shape and density data for: the handful that spacecraft have flown by and imaged, one or two others for which we have indirectly inferred shapes and masses. How does this spin-shape theory actually work for them? That’s meant digging through old papers, finding bits of data for a dozen different bodies, plotting one factor against another, scratching my head, looking for patterns…

I found some patterns. Some of them, I expected; but some patterns are complete surprises, and I can’t see why they should exist. I’ve got one plot where the data points make two lovely parallel lines. Why lines? Why parallel? Why two of them? The trouble is, I only have a dozen or so data points. So this pattern could be pure coincidence. Or it could be hinting at something significant.

Density vs. spin. Are the two lines meaningful, or just the chance alignment of sparse data?

Chance, or eureka? I have to decide which it is, now, before I invest any more time and effort into trying to get more data, or to figure out whatever significance this pattern might (or might not) have. My guess today could lead me to a golden opportunity – or a year’s wasted effort.

I pace the cobblestone streets of Castel Gandolfo trying to make up my mind. And all around me people are celebrating the birth of a Saviour.

It’s easy enough today to say the right words about peace on Earth, and follow the crowds to the manger scene. But 2000 years ago, the shepherds and the magi had only their hunches to follow. Were those really angels singing? Does that star mean something? How did they know? The Wise Men and the fishermen, the prostitute in Judea and the wealthy woman in Macedonia; what stirred them to jump to this new, strange Gospel of confessing and forgiving sin, to follow a baby born in a stable whose teachings got him hung upon a cross?

All of life consists of judgement calls made with inadequate data. Our hunches are shaped by our histories and our knowledge, our fears and hopes. But ultimately they are mysterious… which is only right, as they are what lead us into Mystery itself.

[The LPSC abstract can be found here. I never did write it up as a refereed paper; I was never completely convinced, myself, that the patterns were real. One of the great charms of the LPSC is that precisely such tentative ideas can be offered up to the scientific community, to see if they gain traction. This one never did. It happens.]