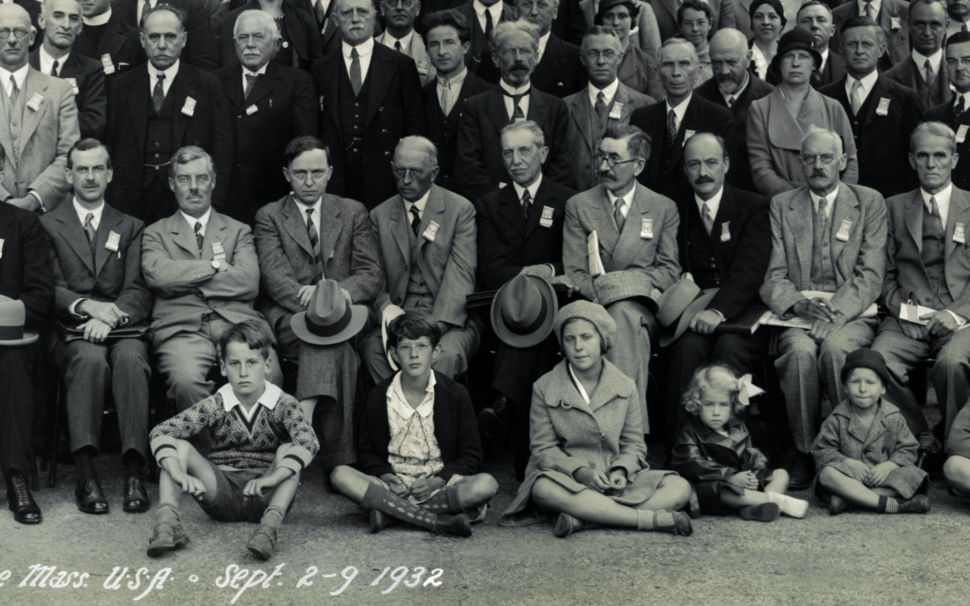 From the group photo of the IAU General Assembly held at Harvard on 2–9 September 1932. Harlow Shapley is the scowling fellow with the hat in his lap; the young woman in the hat sitting on the ground is his daughter Mildred.

This column was first published in The Tablet in May, 2020

A hundred years ago, on April 26, 1920, two young astronomers, Harlow Shapley and Heber Curtis, met for what’s become known as “the Great Debate” on the nature of spiral galaxies. At stake was our understanding of the size and shape of the universe itself. It was an evening’s entertainment for the eminent scientists of the National Academy of Scientists; the topic was chosen instead of Einstein’s new-fangled General Relativity, which most of the audience neither understood nor appreciated.

Shapley cited evidence that certain spiral-shaped nebulae must be relatively small clouds of luminous light within our Milky Way; for one thing, they did not have the colors he expected for stars. Curtis argued from his exquisite photographs that they were indeed distant “island universes” of billions of individual stars, at immense distances from us, as Kant had first suggested in the 18th century.

The gift of gab

Curtis was the more talented speaker; by contrast, the great Henry Norris Russell (of the famous “Hertzsprung-Russell” diagram, known to all students of astronomy) recommend that Shapley “cultivates the gift of the gab, which he needs.” By all standards, Curtis won the debate. Following upon it, he was named the director of the University of Pittsburgh’s Allegheny Observatory.

But Shapley’s performance was good enough to earn him the directorship of the Harvard College Observatory, where he did important research for the next forty years. One of his first acts was to abandon his debate position, once Edwin Hubble had published his data on the distance of those spiral galaxies showing Curtis was correct. Eventually this understanding of the nature of spiral galaxies, Einstein’s Relativity, and Hubble’s observations would lead to the birth of our modern Big Bang cosmology.

A friend in the desert

Fifty five years later, in May of 1975, I arrived at the University of Arizona to give my very first scientific paper and begin graduate studies there. Our conference opened with all the participants taking a hike in the desert up Sabino Canyon. I was an easterner, unused to desert settings, and felt quite lost; but along the trail I was adopted by one of the meeting organizers.

That’s how I met Mildred Shapley Matthews, Harlow’s daughter. I thought of Mildred as a sweet little old lady; she was older than my own mother… though younger than I am now! She wound up editing (and greatly improving) several of my papers for the University of Arizona Space Science series of books.

Years later I got to meet Dorrit Hoffleit, an astronomer at Yale who had been a student of Harlow Shapley. She reminisced about Shapley, and Russell, and recalled meeting Mildred “when she was a little girl.”

Meanwhile, while I was studying at Arizona, Margaret Burbidge was working across the street at Kitt Peak Observatory headquarters. Her landmark papers first explained how stars make chemical elements, a field I would eventually do postdoctoral research in. She also came to mind this past month [in 2020], at the news of her passing on April 5.

As it happened, all three of these women lived to be 100 years old.

I’ve been reflecting on all of them during this Easter season. Reading the Acts of the Apostles, I can appreciate St. Luke’s position. He would have been too young to know Jesus personally; but he knew people who knew Him. Luke writes with the same breathless amazement I feel when I think about my own personal connections to the astronomers who shaped our understanding of, literally, everything.