This column first appeared in The Tablet in January, 2010. 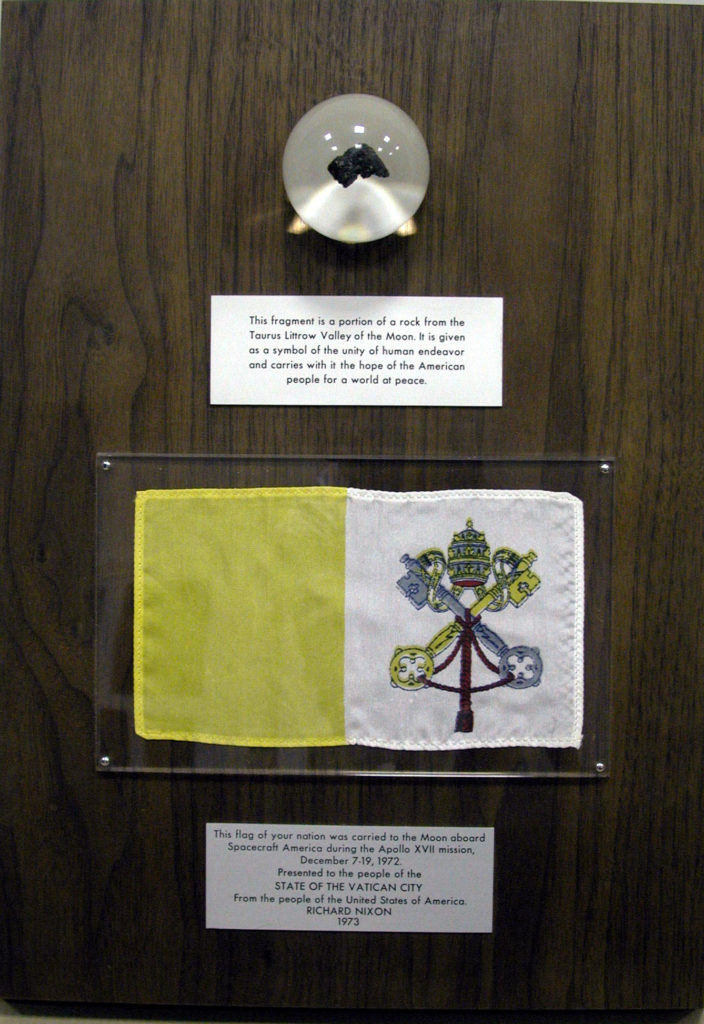 During the Apollo 17 walk on the Moon, the astronauts collected a rock for the specific purpose of providing samples to pass out to nations around the world. About 200 Apollo 17 samples were distributed in this way. But Robert Pearlman, who runs the space-news website collectspace.com, wrote in 2010 that NASA can now account for only 61 of them. (The one sent to the Vatican resides in our display case at the Vatican Observatory.)

I’m not surprised; keeping track of samples is harder than it looks. The humor of the “Night at the Museum” movies comes from the conceit that the specimens in a museum’s display cases are alive, that they get up and move around during the night. Every collector knows that feeling. It’s surprisingly hard to keep our collections in order.

One of the little breakthroughs in my own research was finding that a simple measurement of a meteorite’s density and magnetic susceptibility (literally, how susceptible it is to being pulled on by a magnetic field) can immediately distinguish those meteorite classes that are typed by iron content. In this way I can immediately see if a low-iron meteorite has mistakenly been labeled with the name of a high-iron meteorite. This is useful, as many meteorites can be indistinguishable by eye. Using this technique, colleagues in France have done a systematic survey of meteorite collections in Europe and they have found that perhaps 10% of all meteorites in these museums are clearly mislabeled.

Sometimes curators are infuriated when they hear that what they thought was a precious carbonaceous chondrite is in fact nothing but a lowly terrestrial piece of shale. (I speak from experience!) On the other hand, if you’re lucky you can pair up two such mislabeled samples and assume that the labels merely were transposed.

At the beginning of each year I try to do an inventory of the meteorites I curate at the Vatican, checking up on the pieces that have been out on loan or sent to labs for scientific experiments. Of the 1170 different samples in the Vatican collection, a mere 32 are out on loan; but some, I know, I will never see again. This doesn’t count the sixteen pieces that have disappeared since the inventory before I took over the collection. It’s the price of letting people actually use the collection for science, rather than hoarding it for the pleasure of ownership.

Granted, the emotional pleasure of possession is akin to the pleasure of having things sorted into their right places – even when it is a guilty pleasure. Consider the missing Moon samples: if they’ve been stolen (as happened, for example, in Malta in 2004), whoever has them now can never display them without being recognized as a thief. Yet that desire for “ownership” leads them to steal… and thereby to destroy the pleasure of maintaining proper order in the universe of the museum.

As in many aspects of doing science, we curators do what we do for an emotional fulfillment that goes beyond the work itself. I sense a familiar call in the contentment I get from doing this humble sorting. Reminiscent of the Gospel’s description of finding the pearl of great value, there’s an undeniable joy at finding a missing sample; and a satisfaction in setting a collection in order that goes far beyond the mere utility of having the right samples quickly at hand. It is in the still, quiet voice of a museum shelf that I feel the rightness of the Creator.

Or perhaps my satisfaction simply comes from the sense that here, at least, is a facet of nature we can control and systematize, in the face of a universe battered by the chaos of snowstorms and earthquakes.

Brother Bob Macke SJ has taken over as the Vatican meteorite curator, since I was given the task of running the Foundation and directing the Observatory; it’s his job to keep track of the samples now.

65  |  Across the Universe: Defamiliarization