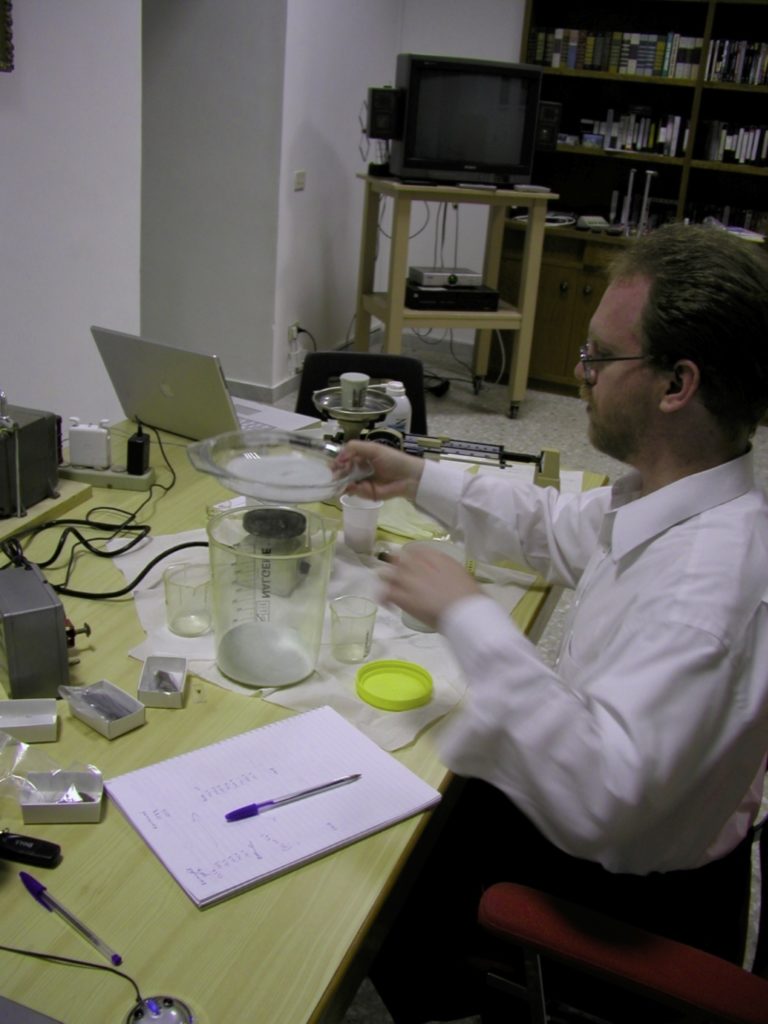 This is Bob Macke in 2004 or so, making measurements in the classroom at our old quarters in the papal palace. Why had we taken over the classroom for our work? Because, unlike the lab, it was air conditioned…

Looking over my shoulder at the computer screen, Bob Macke starts telling me about a cartoon he’d seen on an office door at MIT. ‘The first panel,’ he says, ‘was a guy labeled “cartoon scientist,” surrounded by boiling test-tubes and sparking electrical equipment, shouting that he’s discovered the Elixir of Life. The second panel, labeled “real scientists,” was just a bunch of people looking at a computer screen, and one says to the other, “I think our data point should be plotted in red.”’

I give him a dirty look. Two keystrokes later, and our data points are now plotted in red.

It’s two weeks before I leave for the annual meeting of the Meteoritical Society, and I’m busy trying to prepare three papers.

One is a collaboration with a colleague in Pennsylvania. I’ve posted a rough draft of our paper on a web page for him to download and comment; two weeks, and I still haven’t heard back from him.

The second paper is to be presented by a colleague from Michigan. She’s e-mailed me her Powerpoint presentation, asking for my comments. The most glaring problem is that on the first slide, my name is misspelled. More subtly, I realize that I don’t believe half of the data points that she got from me. I need to go back and measure things more carefully. With luck we’ll have time to correct both mistakes before she gives her talk.

The third paper is the most challenging. We submitted our summary back in April, just before the meeting deadline, in full knowledge that none of the data we said we’d be reporting actually existed yet. Now it is summer, and I’ve been joined here in Castel Gandolfo by a young Jesuit brother from Missouri, Bob Macke, who’s trying to figure out how to make my lab equipment work. Finally, after ten days, we have some data points to plot.

Bob’s just 30, born the year I graduated from MIT. He went there, too, class of 1996; we have a double bond, Jesuit and Techie, of common experiences. On his computer desktop are images of the X-Prize competitor that recently broke the space barrier, the first private spacecraft to reach an altitude of 100 km. There’s a little “Tom Swift” in me, too, still dreaming of adventures in space.

We’ve got a new machine in the lab, a helium pycnometer, that measures the densities of porous rocks (like our meteorites). The sample is put in one cell, pressurized with helium; the more space taken up by the rock, the less space there is for helium. When the helium is allowed to expand into a second cell, the change in pressure lets us calculate the volume of the rock. Divide that into its mass and we get its density.

Bob is comparing these densities with other physical parameters of the meteorites, looking for trends. We’re concentrating on multiple stones taken from the same meteorite shower, comparing the measurements from stone to stone. We’ve already come across a couple of “ringers”, meteorites that don’t fit with the others. Is this telling us something about inhomogeneities in the asteroids? Or is it just that a couple of samples have gotten mislabeled and mixed into our set by accident?

‘What is this all going to mean, even if we do find out that showers of falls are not all the same?’ Bob asks me.

I was a little leery of having a stranger in my lab. I am used to working alone, nobody watching me when I take a break to ‘think things over’ while playing solitaire or reading the newspaper on-line. Nobody asking me embarrassing questions.

‘It’s a fishing expedition,’ I admit. ‘We take the data now, plot everything versus everything else, and see if something interesting pops out. Probably we won’t learn a thing. But every now and then, something unexpected comes up out of the data.’ It’s true; six years ago we stumbled across a new understanding of asteroid structure in just that way.

But the real reason is even less scientific. It’s an excuse to play with the rocks. The dark glassy balls of stone and iron covered with fusion crust, the grains of minerals that have spent most of their existence in outer space, excite my imagination. I love to hold them, I love to look at them, I love to measure them and tease out of them whatever little secrets they may hold. Those rocks and I share a common Creator.

Bob Macke SJ joined the Vatican Observatory staff full time in 2013, and he is now the Curator of Meteorites in Rome, my old job. He still plots his points in red.