The following column was written in 2006, just after the IAU had voted to name Pluto a Dwarf. It ran in The Tablet in August, 2006. We ran it again in 2015, just before New Horizons went past Pluto. Now it has recently come out of hibernation on its way to a Kuiper Belt Object encounter next January. 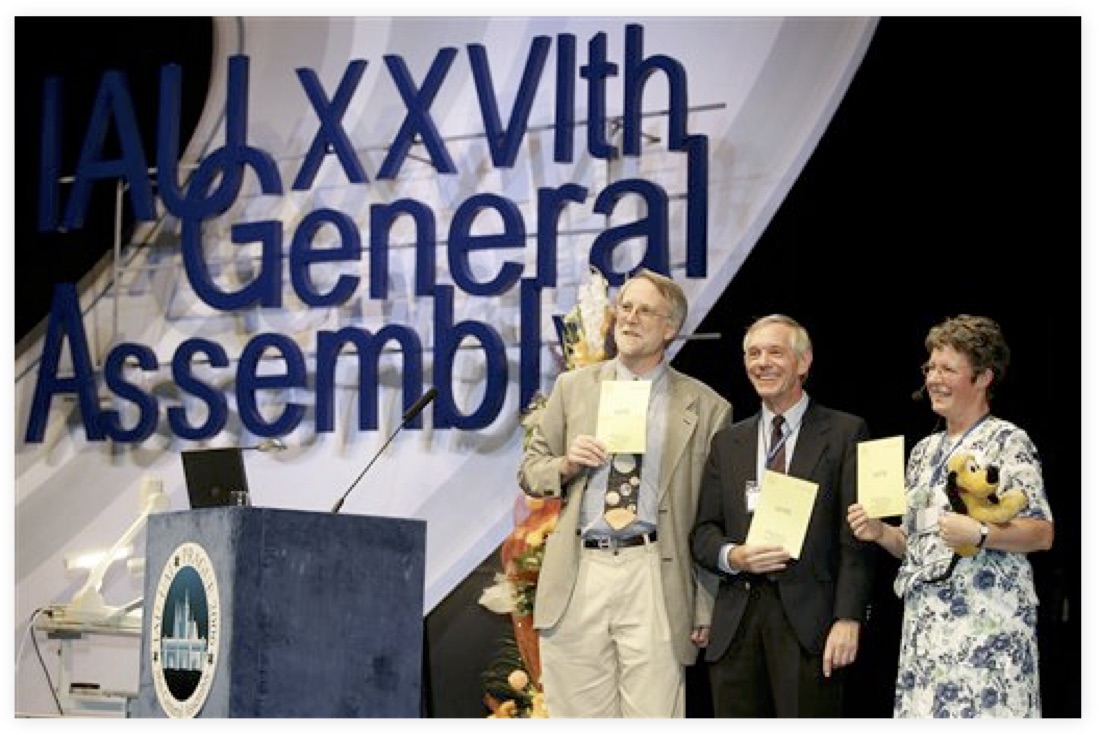 Explaining the voting procedure on Pluto in 2006 were Rick Binzel, Fr. Chris Corbally SJ (of the Vatican Observatory) and Jocelyn Bell Burnell

Never mind the 2,500 astronomers attending dozens of seminars and joint discussions about stars and galaxies in Prague; the news of the 2006 triennial General Assembly of the International Astronomical Union (IAU) was all about the changing status of Pluto.

General Assemblies are different from typical scientific congresses. Rather than being focused exclusively on presenting scientific results, the main point here is to decide on all the arbitrary but necessary definitions that let us talk to each other and understand each others’ data. For example, we’re worrying about tweaking definition of latitude and longitude on the Moon to match the the expected precision of the coming generation of lunar spacecraft from India, China, Japan, and the US.

Likewise, defining “what is a planet” is both arbitrary and necessary. How do we name the newly discovered objects out beyond Pluto, that rival Pluto in size? (The rules, and the committees, for planets are different than those for comets and asteroids.) Which committee keeps track of their orbits, and assigns names to their surface features? What definition works for planets around other stars?

I’d sat on earlier planet-defining committees, but always at the last moment our agreements fell apart. The proposal by the most recent committee (this time much smaller, and including historians and journalists as well as scientists) may already have failed by the time you read these words; the final vote is slated for Thursday afternoon. [It did fail!]

But following a meeting of IAU’s Division III, the planetary scientists’ corner of the IAU, a general consensus began to form around a slight modification of the original proposal.

To be a planet, an object would have to be smaller than a star, in orbit around a star, but large enough to pull itself into a rounded shape. (The actual definition speaks of an approach to hydrostatic equilibrium, and other such technicalities.) One then divides the planets in our solar system into the “classical” eight largest planets, whose gravity dominates their regions of space, and a new class of less dominant, Pluto-like planets.

The name for the latter is still to be settled on. “Pluton” was suggested, but that word describes a lava mass in geology, and is already the word for Pluto itself in many languages. Other fanciful possibilities include “planetoid” or “plutenoid” or “plunet,” but I suspect in practice we’ll just call them “dwarf planets,” to go along with dwarf stars and dwarf galaxies in the astronomical bestiary. [And of course, that’s indeed what we decided on.]

More controversial aspects reported in the news coming from the original definition, worrying about double planets and the like, will likely be dropped in the final definition. They were originally just footnotes to the original proposal, in any event. And all the really tough issues, deciding which committees handle dwarf planets, including naming the new candidates in the outer solar system, will be left to us in Division III.

To me, the definition makes scientific sense: my own research shows a distinct difference between small but compact objects like Pluto and the loose rubble piles of asteroids. And one advantage of this definition is its creative ambiguity. In reply to the question, “Is Pluto a planet?” it will be equally true to say, “yes, it’s a dwarf planet” and “no, it’s a dwarf planet.” That reflects the ambiguity of nature itself.

Still, it all does have an aura of counting angels on a pin. Indeed, the entrenched positions of many astronomers (and the public) resisting change, and the feeling that somehow “the rest of us” were left out of the decision, reminds me a lot of what the Church went through during Vatican II. Like the post-Vatican II church, astronomy will survive… until these changes become such second nature to us, that we begin to think of them as tradition.

The full story behind the Pluto decision can be found in chapter two of our book, Would You Baptize an Extraterrestrial?  newly available in paperback.