The original version of this article first appeared in The Tablet in May, 2004, announcing the transit as an upcoming event; we ran a version here on the blog in June, 2015.

“There’s a little black spot on the Sun today…” In the Police song “King of Pain” these words evoke an alienating sense of remoteness. But on the morning of June 8, 2004, a much larger spot was visible crossing the Sun, an event that occurs but twice a century; when it happened in the eighteenth century, it changed human history. 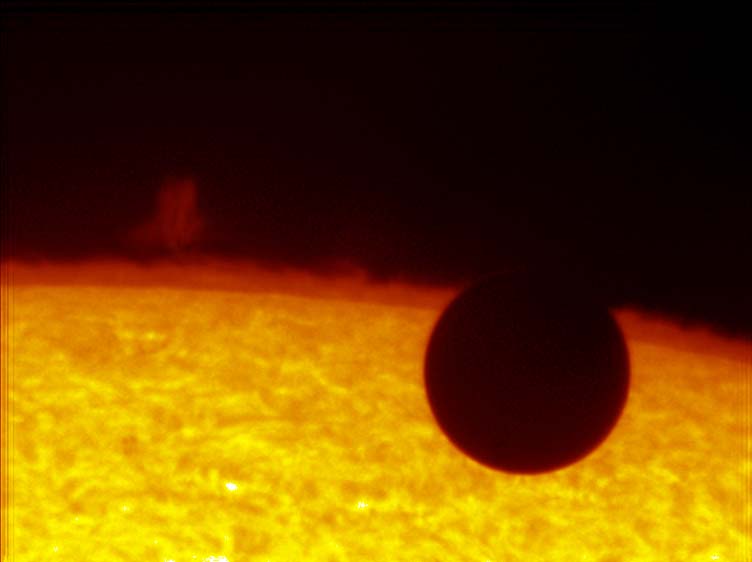 Transit of Venus, 2004, imaged by Ron Dantowitz from the roof of the Papal Palace in Castel Gandolfo

A “transit” occurs when we see one astronomical object appear to move in front of another. Since Venus orbits between us and the Sun, you might expect it to transit the Sun rather frequently. But the Sun is small, as seen from Earth, and the orbit of Venus is tilted slightly compared to ours, so Venus usually appears to pass above or below the Sun. It’s only when our orbits are precisely lined up that the black spot of Venus’ nighttime side stands out against the Sun’s brilliant disk. This happens in pairs, 8 years apart, about every 130 years. The last pair of transits were in 1874 and 1882.

The Venus transit was merely an astronomical curiosity when first observed, by the English cleric Jeremiah Horrocks in 1639. But in 1716, Edmund Halley (of comet fame) pointed out that the transits of Venus predicted for 1761 and 1769 provided a unique opportunity to make a fundamental measure of the universe.

By the 18th century, the observations of planets and Kepler’s laws describing their motions merely allowed astronomers to compute the relative distances between planets. Only if you could actually count  the number of miles between any two planets, could the distances to all the other planets be worked out. But how do you make that one definitive measure?

Halley realized that a Venus transit let you to do just that. It’s a matter of parallax. If two people observe the same transit from two different vantage points, they’ll see Venus crossing the Sun in two slightly different paths. The distance between those paths, if you know how many miles apart the observers are, can then be translated into how many miles away Venus is from us and from the Sun.

Thus, to measure the parallax of Venus you have to have at least two observers in well-mapped positions, as far as possible from each other. Getting to distant locations and measuring their positions accurately was in itself was a challenge in the 18th century. The more people observing, the better you could average out these uncertainties. By the middle of the century, an international group of astronomers were preparing the observations.

Unfortunately, they didn’t count on the vagaries of international politics. By the 1761 transit, France and Britain were engaged in the Seven Years War, raging from India to North America. When the Astronomer Royal’s assistant, Charles Mason, left for India he never got farther than the English Channel before being attacked by the French fleet. (His ship escaped back to England, and eventually he sailed to South Africa.) Likewise, the French astronomer Le Gentil got to India only to find that his goal, the French colony at Pondicherry, had fallen to the English; on the day of the transit, his boat was still out at sea, for fear of capture.

With all these difficulties, and the challenge of observing a very dark spot against a very bright Sun, the results of the first set of observations were less than satisfactory.

It was another eight years before a second set of observations could be made. Mason and his surveyor assistant, Jeremiah Dixon, came home by way of the North America colonies, where they took the time to survey the boundary between the northern and southern (slave-holding) American colonies, known to this day as the Mason-Dixon line. Le Gentil stayed in India to wait out the next event. And, after the end of the war, the Royal Astronomer decided to lease a ship, the Endeavour, from the Royal Navy for the next expedition to the South Seas.

The 1769 event was observed at 77 different locations around the world. Le Gentil, in India, saw nothing but clouds; having missed both events, he returned to France only to find that he’d been declared dead and his property distributed among his heirs. But other observers (including Jesuits in China and an arctic expedition lead by Fr. Maximillian Hell of Vienna) had greater success. The results were surprising: the solar system turned out to be some ten times bigger than most astronomers had expected.

The astronomical significance of this measurement did not stop at the solar system. Knowing how far the Earth travels as it goes around the Sun allows you to use the same parallax trick; the positions of nearby stars appear to move ever so slightly compared to more distant stars when observed from one side of the Earth’s orbit to the other. In this way, distances to stars could be measured, and the scale of the galaxy determined. This was the first step in calculating the distance to other galaxies, and clusters of galaxies, a measurement that forms an active part of astronomy even today. It’s a big, empty universe out there.

The success of the 1769 observations had other ramifications. The young Navy lieutenant assigned to keep an eye on the Endeavour — James Cook — started a tradition of combined naval and scientific exploration of distant seas, from Australia to Hawaii, which foreshadowed Darwin and the Beagle and indeed the military pilots who flew the Apollo missions to the Moon.

Today, spacecraft make these measurements far more accurately. But anyone equipped to look at the Sun can recreate those historical observations. (Use all the same care you’d use for a solar eclipse, as in 1999: proper filters, or pinhole projection. Don’t look directly at the Sun, and don’t look too long even with filters — stop before it hurts!)

Take a moment on the morning of June 8 to appreciate this rare dance of the planets. There is a peculiarly human delight at predicting and seeing this conjunction, and knowing its historical and scientific significance. As Sting sang: there’s a little black spot on the Sun today; that’s my soul up there.

The transit in 2004 was observed from our rooftop in Castel Gandolfo with a group sponsored by Sky and Telescope. The 2012 transit was observed there by our Vatican Observatory Summer School 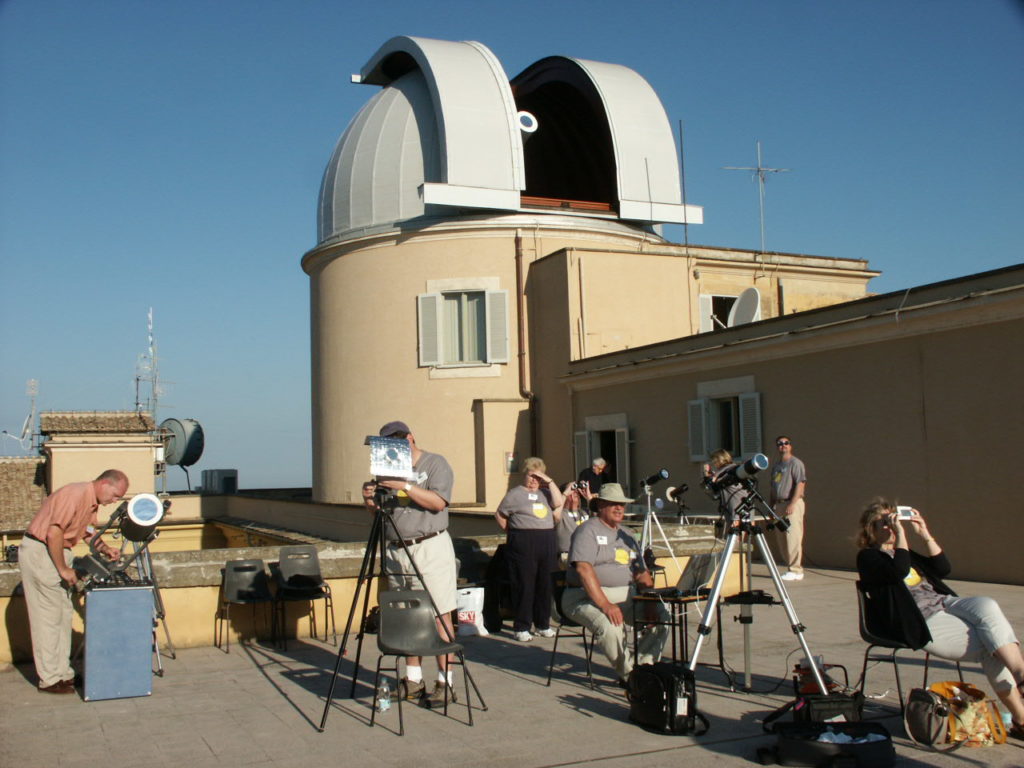 Transit observers from the Sky and Telescope group of 2004, on the roof of the Papal Palace

181  |  Across the Universe: Information and truth