This column first ran in The Tablet in December 2012

“The Pope is on Twitter,” I am told [in 2012]. “Shouldn’t the Vatican Observatory have a Twitter account, too?” I’m the Observatory’s expert on such media (expert up to 1995) so I look into this. I start with a personal Twitter account, and then a few days later @VaticanObserv is born. (So are versions in French, Italian, Spanish, and Polish, thanks to our polyglot community.)

Twitter, a network of friends communicating in 140 character snips, had already been around for half a dozen years and boasts half a billion accounts, but it’s new to me. My friends seem quite proficient at sharing the minutiae of their lives; I agonize over every post, hitting delete more often than send.

But soon I discover an unexpected utility for this network. When the American Geophysical Union meets in San Francisco, with latest spacecraft results from Mercury, Mars, and the Moon, I can follow from Rome every talk as twitted by my friends there.

Finally, solid evidence for water ice has been found in the eternally shadowed craters of Mercury’s poles. (The rest of the planet, so close to the Sun, bakes at 600 degrees.) The gravity mapper orbiting the Moon has revealed that the lunar crust is much thinner than previously believed – uprooting everything we thought about the Moon’s bulk composition. (In their analysis they relied on densities of Moon rocks that I helped measure.) And, rumors to the contrary, the Curiosity rover has not found complex organic chemicals in the Martian soil. (Not yet.) I hear these details, tweet by tweet, as they are announced. It’s like being there, but without the jet lag.

Each tweet is compressed knowledge, like a point of scientific data. I’m preparing a talk this week about the properties of black meteorites for a workshop planning a spacecraft mission to a dark asteroid, and my challenge of compression here is to fit five years of work into a ten minute presentation. I rely on graphs and plots. Every dot I plot represents a day’s work in my lab. No one point means much; but the pattern of many such points begins to build up a picture, Seurat-like, or like digitized images related in dots-per-inch. Our knowledge is constructed and communicated in a language made of sentences, made of words, made of letters, broken and reassembled over and over. 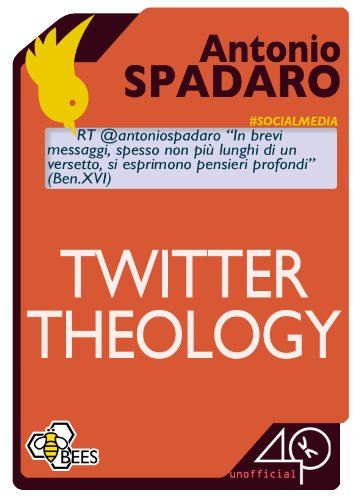 Spadaro’s title is in English; the book is in Italian. A year later Spadaro would become famous as Pope Francis’ go-to-guy for important interviews…

Fr. Antonio Sparado, the editor of the Jesuit theological magazine Civiltà Cattolica, is an expert on “Cybertheology” and has a book titled Twitter Theology. (I love the irony of writing extensively about Twitter.) He is not the first to compare tweets to haikus; he has a chapter on “twaikus and twitterature” – clearly a low taste in puns is an essential part of the conversation… and of being a Jesuit in general, I might add.

But in fact we know how the richness of this Christmas season is so intensely communicated in the brief lines of favorite carols. It is carried in the simple message of the angels: “I am bringing you good news of great joy for all the people: to you is born this day in the city of David a Savior, who is the Messiah, the Lord.” In the Vulgate, that comes to 142 characters; the Greek is 146 characters, though less if you drop the spaces, as they did back then. (Maybe that’s why?)

I worry that Twitter’s 140 character limit might lead to misunderstandings, but in fact the opposite seems to be the case. Compressing a big idea into a small space ultimately means that our message is either profound, or safely unintelligible.

Of course we see this profundity of compression in the Christmas message itself. Everything we need to know has been expressed, not in 140 characters, but in one Word.