This column first ran in The Tablet in March 2014

Isaac Newton thought that planetary orbits in our solar system were kept stable by God’s direct intervention; they were proof to him that God existed. A hundred years later, the great French mathematician and skeptic Pierre-Simon Laplace described his new orbital theory to Napoleon and supposedly quipped of God’s role, “I have no need for that hypothesis.” In fact, it is bad theology to reduce God to merely a gap-filling hypothesis. Only recently, however, have we learned that, actually, planetary motions may sometimes not be so stable after all. 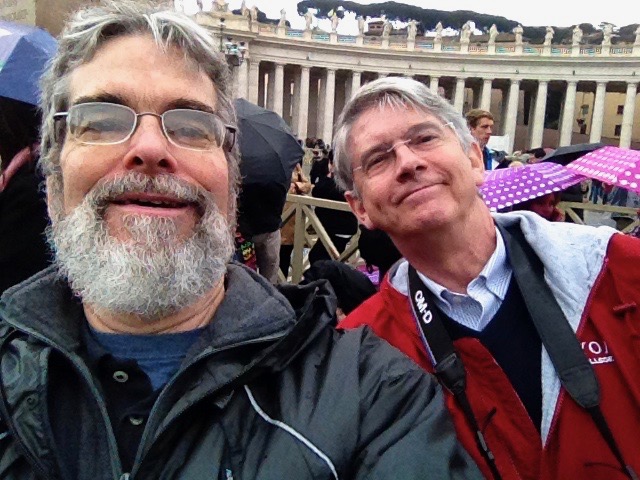 I took this selfie with Jack Wisdom in St. Peter’s Square where we went to hear the Sunday Angelus

One of the pioneers of studying chaos theory in celestial dynamics is Jack Wisdom, an MIT professor (and MacArthur “genius”) who is visiting the Vatican Observatory this month. He’s working now on modeling the complex interaction between the Moon’s orbit and spin with the spin and orbit of the Earth. It’s all tied to the larger issue of the origin of the Moon.

After the Apollo program ended, more than forty years ago, the study of the Moon went into a gradual decline. The annual “Lunar Science Conference” in Houston changed it name to the “Lunar and Planetary Science Conference” as other bodies, especially Mars, began to dominate its sessions. But in the last ten years, a series of Moon probes (including some from Japan, India, and China) have taken a new look at our nearest neighbor. In September 2013, the Royal Society hosted a big meeting on the topic; and the 2014 Lunar and Planetary Science Conference opened with a special session on “new perspectives of the Moon.” 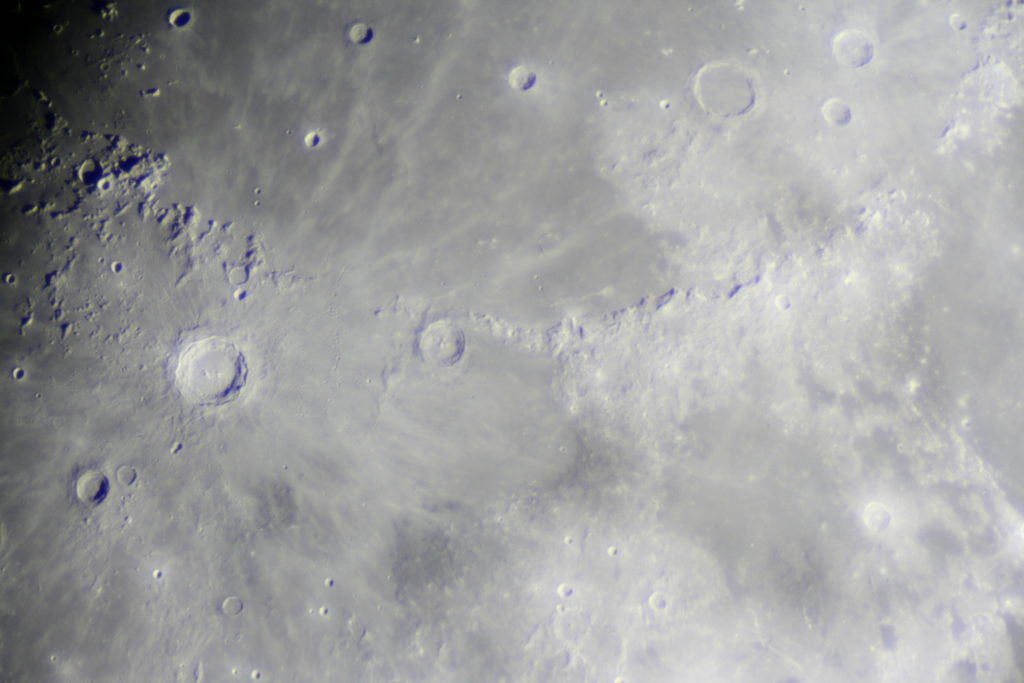 This photo of the moon was taken at the Vatican’s 16-inch refractor in Castel Gandolfo, so long ago that I forget what camera we used…

Understanding how the Moon was formed can tell us how planets form in general. What’s more, its early evolution should also have affected conditions on Earth while life was getting started here. Both questions figure into our guesses about the likelihood of planets with life elsewhere in space.

The Moon’s origin is a thorny problem in both celestial mechanics and geochemistry. Unlike meteorites or Mars rocks, Moon rocks are identical to Earth’s in many subtle chemical ways. But compared to Earth, the Moon lacks water, a big iron core, and certain other elements. The least-bad theory we have to date suggests the Moon was formed when a Mars-sized object hit Earth while the planets were forming, four and a half billion years ago. (The idea of rogue Mars-sized impactors seemed unlikely until computer models showed that planets big and small were changing orbits, chaotically, back then.) A mix of Earth and impactor material could explain the Moon’s chemistry; but actually forming the Moon from such debris into its slightly inclined, elliptical orbit is trickier.

That’s where Jack’s work comes in. From the quiet of the Pope’s summer gardens, he connects via the internet to a cluster of computers back in Cambridge, Massachusetts running a series of simulations for the tidal evolution of the early Moon. Its final orbit depends on how energy is dissipated within the Earth and the Moon (my own work plays a small part in understanding that question). But under certain conditions, the Moon’s spin becomes chaotic, varying unpredictably even when the calculations start with identical conditions.

Unpredictable is not the same as unconstrained; these bodies still operate under Newton’s deterministic laws. But the different forces interact such that tiny uncertainties in the initial conditions (or even just round-off error in the calculations) can lead to wildly different results. Thus in practice we can cannot determine what outcome is certain, but only which is most likely.

Laplace’s experience led him to believe that as our maths got more advanced, our ability to explain things would become ever more precise. But in fact the opposite has occurred. We know better now the boundaries of what we can know for certain.