This column first ran in The Tablet in September, 2016

Scientists communicate with images. We want to know not simply one value, but how each value compares with other values measured in other situations: other times, other samples, other planets. Picturing our data as spots on a grid is worth a thousand numbers. 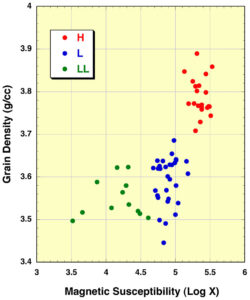 A plot of meteorite magnetic properties against density nicely sorts many meteorite samples into distinct chemical groups… an example of pictures telling a story. (from a paper I published many years ago…)

At the 2016 meeting of the Meteoritical Society in Berlin, every paper relied on images with specks of many colors (each color also a different shape, for the the color-blind) representing different sets of data.

Instead of plotting all the thousands of individual measurements, though, it’s usually sufficient to mark on the diagram one spot that represents the average value of all the points. Through that spot you can then draw a cross of lines embracing the area that would have been covered by the whole cloud. We call these lines error bars.

While most meteorites have the texture of concrete, pebbles and dust squeezed together, one particular class looks instead like chips of basaltic lava. For forty years we’ve believed that most of these basaltic meteorites came from one asteroid, Vesta. Their chemistry is identical and, so far as we could tell, their oxygen isotopes were also all the same.

A plot I saw at our meeting showed a cloud of dots representing the oxygen isotopes of various basaltic meteorites. Each dot, newly measured with the latest techniques, represented hundreds of measurements made on each given meteorite. Presumably the real oxygen value of Vesta is somewhere in that cloud, right? 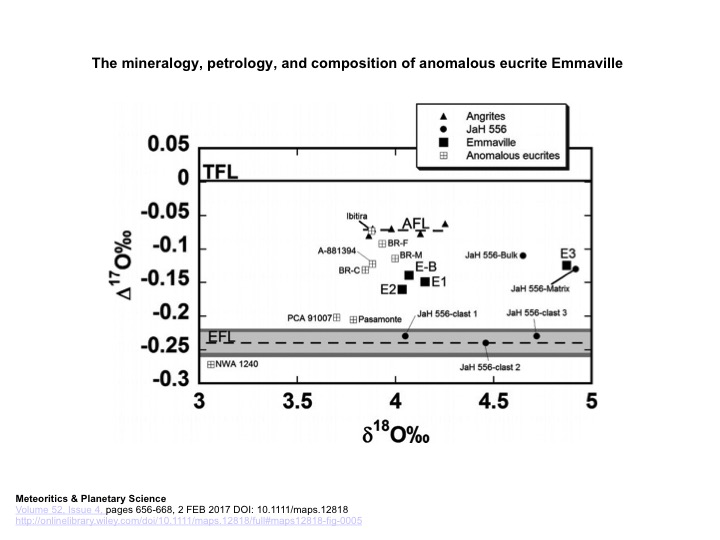 This wasn’t the paper I was thinikng of; but it is recent work on the same field which comes to the same conclusion… there are a lot of “Vesta”-like meteorites that do not have the same oxygen isotopes inside the gray band (EFL=Eucrite Fractionation Line) at the bottom of the figure. (Source: The mineralogy, petrology, and composition of anomalous eucrite Emmaville by T. J. Barrett et al., MAPS, 2017)

But wait: the error bars for each meteorite’s dot are now as small as the dots themselves. Once, we would easily have assumed with a cloud like this that the spread in their locations just represented the general imprecision of our data. No more. Each point is precise, and different from its neighbor point. If each meteorite had actually come from the same parent planet like Vesta, they all should have been piled one on top of the other. They’re not.

We’re not looking at a cloud of unknowing, but a cloud of different bodies, each dot a witness from a different parent planet. Our old idea — they all came from the same place — doesn’t stand up to the new precision of our data. Vesta alone is not the ultimate source of these bodies; the early solar system must have been a far richer and more complex place than we ever had believed.

We know this now because with improved precision we have grown to have greater faith in our data. Like the cloud of witnesses who testify to Christ invoked by Saint Paul, such combined testimony leads us deeper into a richer truth. Every witness is essential; no single witness can suffice.