This column first appeared in The Tablet in October 2011 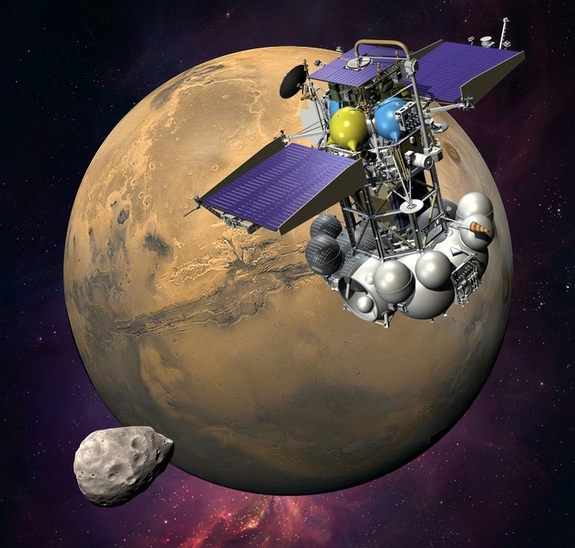 It almost made it! Artist’s conception of the failed Phobos Grunt mission of 2011… [via space.com]

Following the Phobos session at the joint European-American Planetary Science Conference, held[in 2011] in Nantes, France, my colleague Dan Britt commented, “You know the origin of Phobos and Deimos…”

These moons of Mars, named for the Roman gods of fear and terror, are 10-km sized potato-shaped piles of rubble. Pockmarked by craters, they look just like the kind of dark bodies you see in the neighbouring asteroid belt.

“That’s what we think in America,” Dan replied. “But in Europe, apparently, everyone is convinced that they are actually made from material splashed off the crust of Mars by a giant impact.”

For years, Dan had been trying to convince NASA to spend a spacecraft to Phobos. He argued that if you could collect enough rocks from its surface and bring them back to Earth, you would get not only asteroidal material but also an occasional rock that might have been bounced off Mars and landed by accident onto Phobos. Nasa never bought the idea, though; other missions were funded instead.

The Russians, on the other hand, have gone ahead with their own version of this plan. In 2011 the space probe “Phobos-Grunt” (Russian for “Phobos Soil”) was scheduled to launch from the Baikonur Cosmodrome in Kazakhstan. It should land on Phobos in early 2013, gather about twenty scoops of Phobos soil, and then depart, returning its samples to Earth by the middle of 2014. Alas, the launch was a failure; the spacecraft never got to Mars, but fell back to Earth.

I suspect the different “common wisdom” between America and Europe about the origin of these moons was an important element motivating the Russian mission. Getting samples off Mars has always been a dream of planetary scientists. While we do have meteorites we think come from Mars, it would be really good to be able to confirm that idea with samples from the planet itself. But landing a spacecraft softly onto Mars is tricky enough (half our attempts so far have failed); doing so with enough fuel to launch off again, and get back to Earth, would stretch our technical abilities… and our budget.

Tiny Phobos is far easier to land on than Mars, and easier to leave. If it is actually made of Mars stuff, a sample return mission becomes very attractive.

Until our joint Europe-American planetary science conference, however, I had been unaware of just how different were our perspectives about the origin of Phobos. What “everybody knows” in one continent, has been considered a rather fringe idea across the ocean.

Of course, that’s one reason for having international meetings. Seeing a different perspective, having ones own comfortable assumptions challenged, is an essential step in increasing our understanding.

And not just understanding science. While we were meeting in Nantes, an international congress on science and technology was being held at the Pyongyang University of Science and Technology – in North Korea. In attendance was an American astronaut; a White House advisor who had helped broker the meeting between Mao and Nixon in 1972; and the chairman of the British-North Korea All Party group in the British Parliament,  David Alton (Lord Alton of Liverpool). As Lord Alton noted, using science as a vehicle to foster mutual understanding between mistrusting cultures has roots that go back to Matteo Ricci, the Jesuit contemporary of Galileo who brought western astronomy to the Chinese in the early 17th century.

Today, of course, the Chinese have their own space program. They attended our Nantes meeting, and are launching a Mars probe on the same rocket as the Phobos-Grunt spacecraft. [Alas, that was also lost when the spacecraft failed.]

We all live under the same sky. We study the same planets. With different perspectives but a common goal, we can confront the moons of Fear and Terror… and avoid being trapped by the god of war.