This column first ran in The Tablet in June 2011

As a graduate student in 1976 I gave a paper to the Meteoritical Society about a theory that I (and my thesis advisor) had developed concerning a rare class of meteorites which appeared to be bits of lava from the surface of an asteroid. While most asteroids are collections of metal and rock, we knew that some of them must have melted; for one, asteroid Vesta’s infrared colors exactly matched the spectra of these basaltic meteorites. Our work determined that for every gram of lava in these meteorites, there should have been another nine grams of residue in its parent asteroid. 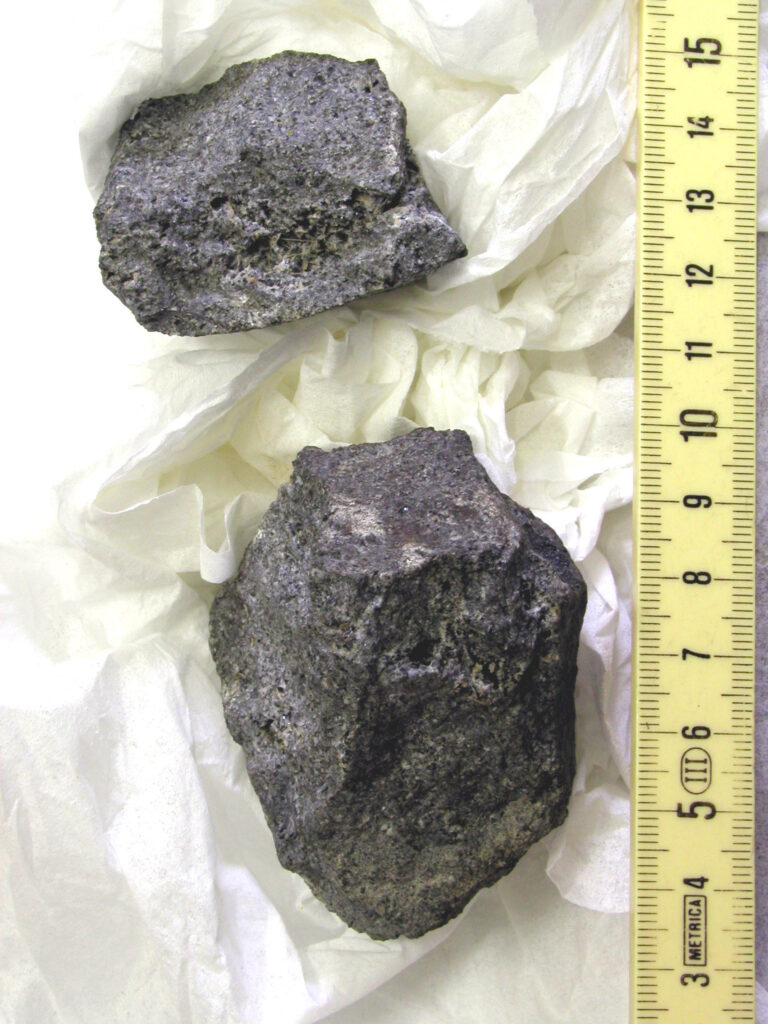 Juvinas is a basaltic meteorite thought to come from asteroid Vesta. These samples are from the Vatican collection. Note the small holes where escaping gas made bubbles in the lava.

After my talk, a grand old man of the field approached me. “If these meteorites come from an melted asteroid,” he asked, “lavas flowing to the top and residue in the center, then once it was broken into meteorites, shouldn’t we have we seen nine times as many meteorites from its interior?” In fact, we’d found none.

Then I realized that we hadn’t merely shown that these meteorites came from an asteroid like Vesta. “The asteroid never broke up,” I replied. “These are samples off Vesta itself, the only large intact asteroid with a basaltic surface.”

“That’s a fine theory, son,” he said then. “But tell me… do you actually believe it?”

And now, this past week, Nasa’s Dawn spacecraft has gone into orbit around asteroid Vesta.

Vesta is the Rosetta Stone of the asteroid belt. It’s a transition between the irregular piles of rock we call asteroids, and the dwarf planets, objects big enough to pull themselves together into round bodies with interesting geology. When Vesta was molten, it was soft enough to become spherical; now that it’s frozen, it can’t pull itself back together once it has been battered into an irregular shape by impacts from smaller asteroids. Vesta has a surface not all that different from the Moon, with samples in our labs, but unlike the Moon it orbits out among all the smaller asteroids and thus is subject to the heating and radiation that asteroids experience, different from the Moon.

Vesta is in an orbit tilted a bit above the plane of the other planets, difficult for a spacecraft to reach from Earth. To get there, we needed a new way of driving our spacecraft beyond just flinging them off the Earth and letting them coast on their way. That new technology is the “ion drive”, using electrical power generated by sunlight to squirt xenon atoms out of a rocket nozzle. This thrust is low-power, but can run continuously, gradually moving the spacecraft to orbit Vesta.

The slow but steady progress of the Dawn spacecraft mirrors the progress in our field, and the lives of us who work in that field. Understanding meteorite petrogenesis has certainly advanced since our original paper, but our basic idea has been remarkably durable, and it’s still cited today. My advisor back then, Mike Drake, like many British scientists of his generation, had had to travel to America to work in planetary science; eventually he became director of Arizona’s Lunar and Planetary Lab, and principle scientist of the OSIRIS-REx mission to the asteroids.

Meanwhile, the grand-old-man’s question to me from 40 years ago is one I continue to ask when I come across an attractive new idea: do I really believe it?

What’s clever isn’t always what’s right. But too much skepticism can keep you from pursuing the truth. You need faith to keep looking. In the case of Vesta, at least, we will now see the truth, close up. With luck I’ll find out if my belief was well-founded.

[Following the results of that mission, I now have a very different idea about Vesta and the origin of the basaltic meteorites… but that’s a story for another day. Since this column was written, both my old advisor Mike Drake and the “grand old man” quoted above, Gerry Wasserburg, have passed away… Gerry died just last month.]