This column first ran in The Tablet in March 2013, soon after the election of Pope Francis

How do I feel about a Pope who is not only a fellow Jesuit, but one who’s studied science (in his case, chemistry) as well? To be honest, I am terrified. For the past twenty years I have lived off the expectations that others have of Jesuits and scientists; now I am going to have to deal with someone who can see past the mystique. Familiarity breeds a certain discomfort. I can only imagine what it’s like for our Observatory’s director, Fr. Funes, who is himself not only a Jesuit and scientist but also from Argentina. [In fact, as it later came out, when José first began the process of entering the Jesuits as a young man, one of the Argentinian Jesuits who interviewed him was a certain Father Bergoglio…] 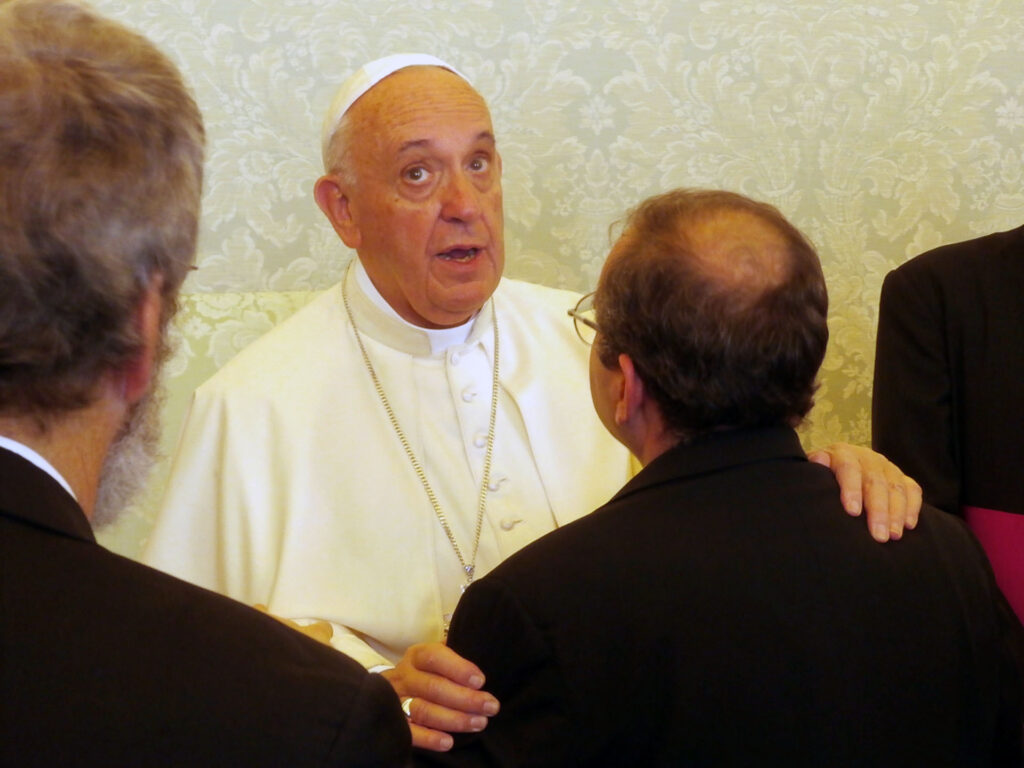 At our audience in September2015 celebrating 80 years in Castel Gandolfo, Pope Francis reminisced about when he first met emeritus director José Funes.

Pope Francis’ chemistry background has not gone unnoticed in the scientific world. A blog post about it at Scientific American’s website trots out all the typical complaints we’ve come to expect about the Church and science: the burning of Bruno for his heliocentrism (a complete misreading of that case, invented by the anticlerical 19th-century Italian government); unfounded speculations that the new Pope might somehow reject evolution; a criticism of the Church’s stance on abortion and birth control as being “unscientific.” (One might have hoped that Scientific American could see the difference between what science tells us and how it is used; one can be opposed to nuclear weapons without denying nuclear physics.) Worse, in the midst of this flood of ignorance, the blogger quotes my own work with approval!

More than just one blogger’s hasty ruminations, this reaction sadly reflects our culture’s expectations of how religion and science interact. People assume a tension between faith and science because they mistake both of them as epistemological systems. They think that we knows some facts through science, other facts through faith, and so we ought to expect that they will conflict sometimes.

It’s easy to see how this mistake arises. Most people learn science only through introductory classes or newspaper articles that emphasize “discoveries”. Facts are easy to report, easy to test with multiple-choice exams. But science is not a big book of facts; it’s a conversation among scientists about how those facts can be best understood. And faith is not about blinding ourselves to the facts or accepting facts on some religious authority without evidence. Rather, it is all about proceeding with an expectation of success even when we lack all the facts. In that sense, every scientist is a person of faith. I have to believe, without certainty, that the experiment I propose to work on for the next two years will actually give me something useful that can contribute to the conversation.

That means, of course, that I perform the experiment with an expectation of what kind of results I will get. Without that expectation, I wouldn’t be able to recognize the results when I got them. But if I knew for sure that the experiment would work, or if I could be certain what its results would be, I wouldn’t have to do the work. As the spiritual writer Anne Lamott reminds us, certainty is the opposite of faith.

Furthermore, I have to be open to the possibility that my expectations were wrong. When that happens, though, it doesn’t alter my faith in science; it merely tempers my faith in my own abilities. Indeed, the best scientists live for the day when their expectations are proved wrong. That’s precisely when we learn something new.

And so now we are running the experiment of a South American Jesuit scientist as Pope. We all come to this papacy with expectations, just as Pope Francis himself has his own expectations. The punditry of predictions about his papacy, now filling our magazines and blogs, is not a bad thing. But we shouldn’t lose faith if things don’t turn out the way we expected.