At the end of September 2016, Rosetta finally ended its mission by crashing into its comet. This column, about an earlier aspect of the Rosetta mission, first appeared in The Tablet in October 2010; we first ran it here in 2016. 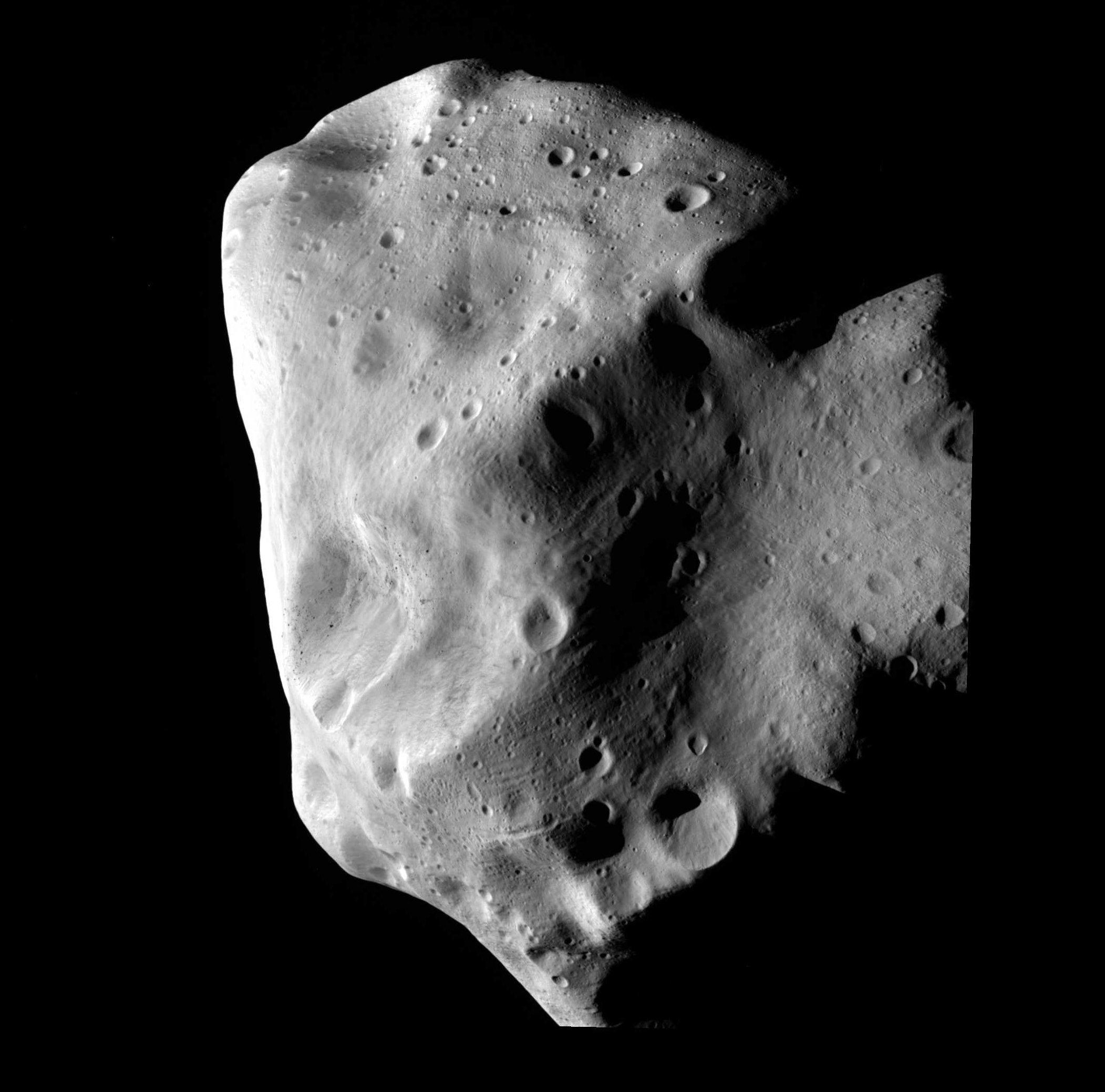 Back in July [2010], ESA’s Rosetta spacecraft, en route to a comet rendezvous in 2014, flew past asteroid Lutetia, a 100 km pile of rock orbiting between Mars and Jupiter. The result of that encounter was a hot topic of both the European Planetary Science Conference in Rome in September and a meeting of American planetary astronomers in Pasadena in October [2010].

Studying asteroids has always been challenging. Even in the largest telescopes they’re mere dots of light, too small to show any shapes, much less surface details. We can only infer their nature from the most subtle of hints: how their brightness varies as they spin, how much infrared light they radiate, their visible and infrared colours.

Minerals that contain iron oxide or water reveal themselves by the specific wavelengths of light they absorb. Sorting by colour and brightness, astronomers in the 1970s were able to work out general classes of asteroids analogous to meteorite types: light, reddish “S” asteroids looked like stony meteorites, while darker “C” asteroids were like carbon-rich meteorites.

But Lutetia was brighter than an S-class asteroid, yet its spectrum was flat. It did not absorb light in any of the characteristic colors. The absence of spectral features was its most revealing feature; our only evidence was an absence of evidence.

Our first guess was a surface of pure metallic, unoxidized, iron… perhaps the metal core of a highly evolved planetoid. Thus Lutetia became the case example of a new “M” class of asteroids. But other, very different possibilities were suggested. Maybe it was a primitive mix of very dark low-temperature material with very high-temperature white inclusions — the famous meteorite Allende was just such a mixture, albeit more dark than light. Likewise the mineral enstatite, made of the common oxides of magnesium and silicon, has no iron and so no absorption features; and there is also a class of enstatite-rich meteorites.

Then, in the mid 1990s, spectra in the infrared showed that at least one side of Lutetia contained minerals that had reacted with, and incorporated, water. None of previously suggested meteorite analogues contain water. This turned all our ideas upside down; the discoverer suggested Lutetia should be given a new classification — not “M” but “W”.

We’ve since bounced radar waves off Lutetia’s surface. It reflects those waves with more power than typical rock, but less power than a metallic surface would.

So what is Lutetia? Now we’ve sent a robot there; and we still don’t know. Rosetta’s images show Lutetia covered with a thick layer of soil, complete with landslides and a series of grooves like those seen on the dark, primitive moons of Mars. But Lutetia’s surface is not dark. Furthermore, its density (also measured by Rosetta) is much higher, more than any other asteroid. It might be a well compressed chunk of stone; or it could be a very loosely accumulated collection of iron shards covered with rocky dust.

Meanwhile, the Japanese, who recovered a probe from asteroid Itokawa (see Across the Universe, 26 June), are being tight-lipped about what they found inside. I suspect that means they found nothing; they didn’t get a piece of the asteroid. Indeed, since 1991 space probes have visited 11 asteroids; we still don’t know what any of them are made of.

[In fact, they did find many tiny grains of dust with the chemical composition of LL class meteorites.]

It may take a crewed mission to an asteroid to answer the question unambiguously. Small asteroids approach Earth all the time; they’d be easier to reach, and return from, than the Moon or Mars.

Humans have a long history of attempting to deduce the unseen from indirect evidence, and our answers have always been ambiguous and contradictory. Ultimately its resolution arrives only when we confront the universe, face to face. We will not know the asteroids, till we become asteroids ourselves.