This column first ran in The Tablet in January, 2013

Over New Years [2013], Pope Benedict welcomed 40,000 attendees to the Taizé Youth Gathering in Rome. A few days later, a somewhat smaller number of them attended my workshop on the life and faith of an astronomer. My setting for the talk most appropriate: the marvelous Jesuit church of St. Ignatius.

There are a number of astronomical connections to this church. It was designed in the 1600s by Orazio Grassi, a Jesuit priest who was also quite a good astronomer, the first to observe a comet with a telescope. (Galileo never forgave him for that scoop.)

Cardinal Bellarmine is buried beneath an altar of the church. Just two years before Grassi’s comets, Galileo had been questioned by Bellarmine, who finally gave him a document certifying that he was no heretic. Bellarmine wasn’t convinced of Galileo’s science, however; the heliocentric system was a radical change, and accepting it then would have been like overthrowing Einstein today. Bellarmine felt, correctly, that Galileo hadn’t proved his point. The fact that in the long run Galileo was proved right and Bellarmine wrong was no fault of either, given the state of the evidence at the time. 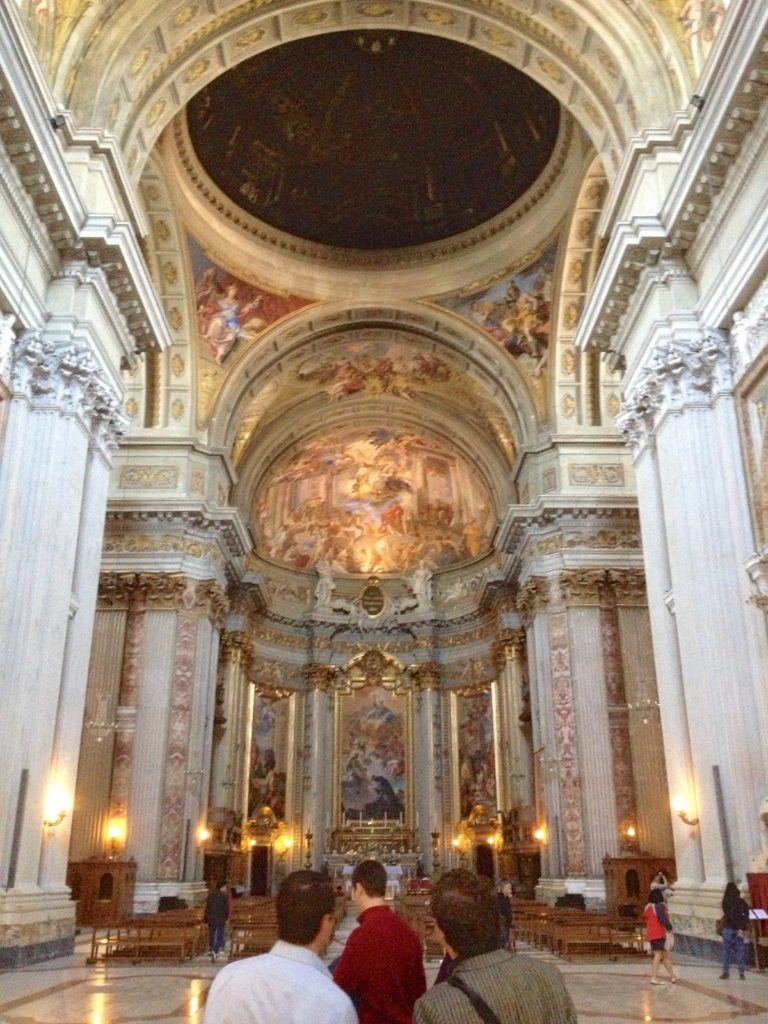 Church of St. Ignatius in Rome. The dome seems poorly lit but otherwise nothing special…

The Church of St. Ignatius is most famous for its very odd dome. It’s not real; they ran out of money, and so they built a flat roof and then a Jesuit brother, Andrea Pozzo, painted the ceiling in marvelous forced perspective so that it looks just like a real dome… from certain points of view, anyway. 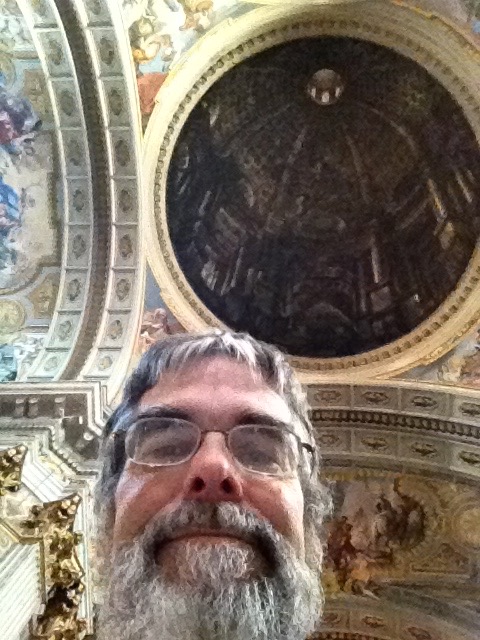 Looking straight up at the dome. The character with the beard really is 3-D; the dome, not so much.

But since it was built with massive pillars designed to hold the weight of a dome, with no dome itself, in the 1850’s Fr. Angelo Secchi could built telescopes atop each pillar. With them he observed the planets, naming “canali” on Mars, and did pioneering observations of the Sun. But his most remarkable work was to put a prism in the light path of his telescope and turn every dot of starlight into a rainbow. He saw how different stars had different spectra, and he classified more than five thousand this way. Suddenly, astronomy became the study of what stars and planets were made of. From the roof of this church, Secchi became the father of astrophysics.

Sitting in this church you are strongly reminded of perspective… how it can fool us, or make us see things in a new way. From just the right place you get the dome’s full effect; look from a different spot, and you can appreciate how the artist did it.

Do we learn truth from science, or from religion? Like that dome, you really only get the full picture when you have more than one point of view.

Yet here’s an odd thing about illusion. Granted, it is not real. But real domes do exist. And if you didn’t know real domes, then this illusion wouldn’t work. You wouldn’t know what it is you were supposed to be seeing.

All our scientific descriptions of nature are, ultimately, illusions. They are incomplete sketches; idealizations of the real thing; not “literally true.” After all, even a physics equation is only a metaphor for the activity it describes. The math is not the truth. But it points us to the truth.

Likewise all our descriptions of God can only be poetry; no mere words can describe that which is beyond description. But like that painting on the ceiling, a good piece of art – and science is ultimately a masterful piece of human art – can lead our imaginations beyond mortal bounds into realms that we can only glimpse from afar.