The following column was published in The Tablet in November 2010 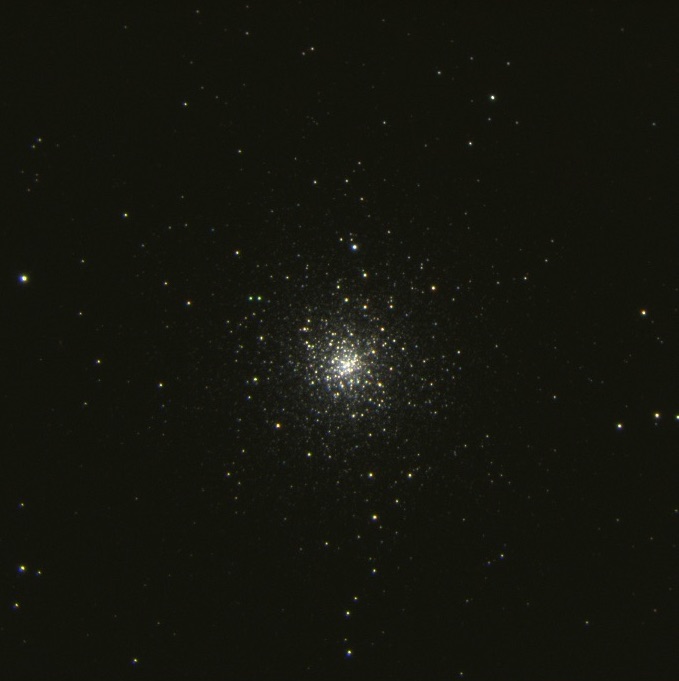 This image of the globular cluster M79 was taken at the VATT in 2013.

Orion is rising at around 8 pm this time of year, a harbinger of winter. If you have dark skies, no clouds, and a good southern horizon, look about midnight low in the sky for a pair of stars beneath Orion’s feet. They point to a globular cluster of stars called M79. It’s a pleasant sight in a small telescope.

Globular clusters consist of half a million stars grouped into a ball only a few light years across. They’re thought to be the framework around which galaxies formed some ten billion years ago; thus they are mostly found orbiting about the centers of galaxies. But this time of year the center of our Milky Way galaxy, with most its globular clusters, lies on the opposite side of the sky from us, among the stars visible only in summertime. So what’s M79 doing here, all by itself, on this side of the galaxy?

In 2004, a team of astronomers from Britain, Australia, Italy, and France doing a census of stars observed by a satellite with an infrared telescope noticed that there was a surplus of red giant stars not far from M79 – stars that are old enough they should have spread themselves out through the galaxy by now, not be clumped in one place. They proposed that perhaps our galaxy consumed another, smaller galaxy in the last billion years or so. These red giant stars – and the M79 cluster – might be bits captured from the center of that other galaxy.

Such “immigrant” stars were in the news this month [November 2010]: one such star was recently found to have a planetary system. We’ve discovered 500 planets [many thousand now!] around other stars so far (not bad, considering the first such discovery was only announced 15 years ago) but this case, the Jupiter-sized body found orbiting the star HIP 13044 is the first such seen about a star thought to have been captured from another galaxy. If nothing else, this shows that other galaxies probably teem with planetary systems, just as ours does. No surprise; but a nice confirmation.

The merger of two galaxies takes place over such great spreads of space and time that it’s hard to actually see, from the inside, one merging with ours… much less believe it is actually happening. The whole idea sounds like bad science fiction. But in other distant galaxies we actually do see such collisions occurring, at various stages of merger and from various angles. Without such observations, we might not even think to consider such an event happening to ourselves.

(Indeed, the proposed galaxy merger may not actually be happening; other explanations for those red giant stars have been suggested. But certainly, seeing it happen elsewhere, we know it’s possible here.) 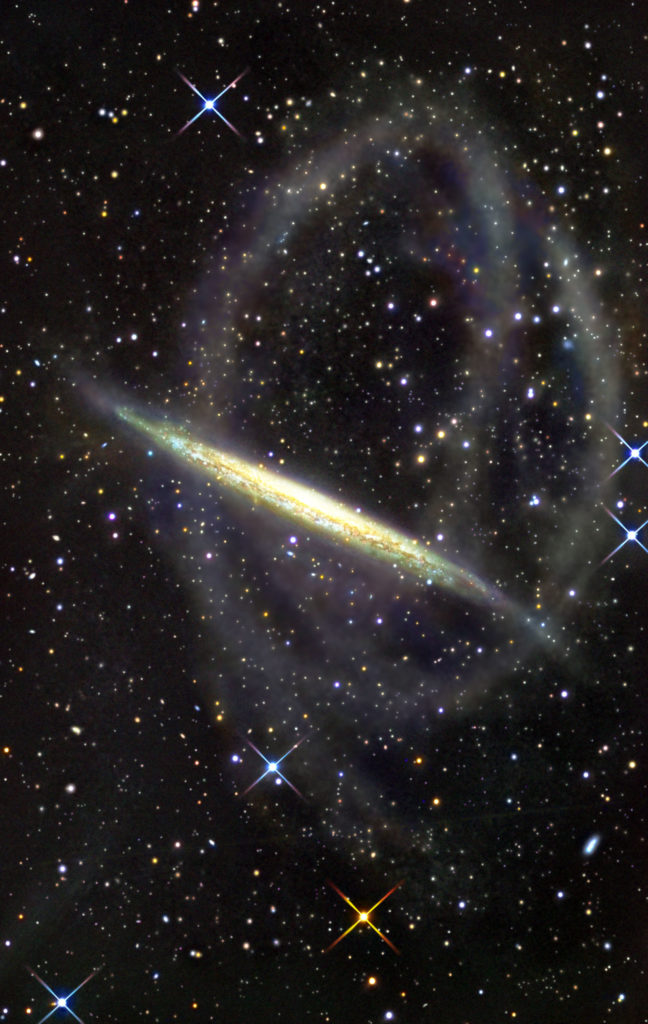 This image by Jay Gabany et al. of the galaxy NGC 5907 shows a stream of stars from a smaller galaxy that is being pulled apart by its collision with NGC 5907

The stars themselves don’t collide in such a merger, of course; the space between stars is so great that two galaxies can pass through each other without their stars touching. But the gravitational pull of these stars on each other twists them into new orbits. And if (as is the case here) one galaxy is much larger than the other, the smaller galaxy will eventually have all its stars swept into the spiral arms of the bigger galaxy.

There’s no danger to our sun from such a galaxy collision. But our sun will eventually run out of hydrogen fuel, and cease to shine. Indeed, the alien star HIP 13044 with its Jupiter-like planet is going through such a phase right now. We know it will happen to us, sure as winter, because we see it happening elsewhere.

Only by looking outside our galaxy, our solar system, or ourself, can we recognize what may be happening within. The speck we see in our neighbor’s eye bespeaks what’s in our own.