A correspondent in Britain has sent to me an article from the Times about Jonny Wilkinson, a famous rugby player, who has found the meaning of life in a combination of “esoteric science and Buddhism.” He is quoted saying, “I read about Schrödinger’s Cat and it had a huge effect on me… It was all about the idea that an observer can change the world just by looking at something; the idea that mind and reality are somehow interconnected. It is difficult to put into words, but it hit me like a steam train.”

I know little of rugby and nothing at all of Mr. Wilkinson. As for Buddhism and quantum physics, I did study both while doing philosophy as a young Jesuit: one semester of each. Mostly, I learned that one semester’s study was not nearly enough to qualify me as an expert on either.

But it was enough to convince me that the connection between the two is tenuous at best. For instance, consider Schrödinger’s Cat: a cat is in a box with a device that randomly may or may not kill the cat, but we don’t know if the cat is alive or not until we open the box and look. To conclude that our looking is what kills the cat, is certainly one way to interpret the result, I suppose… 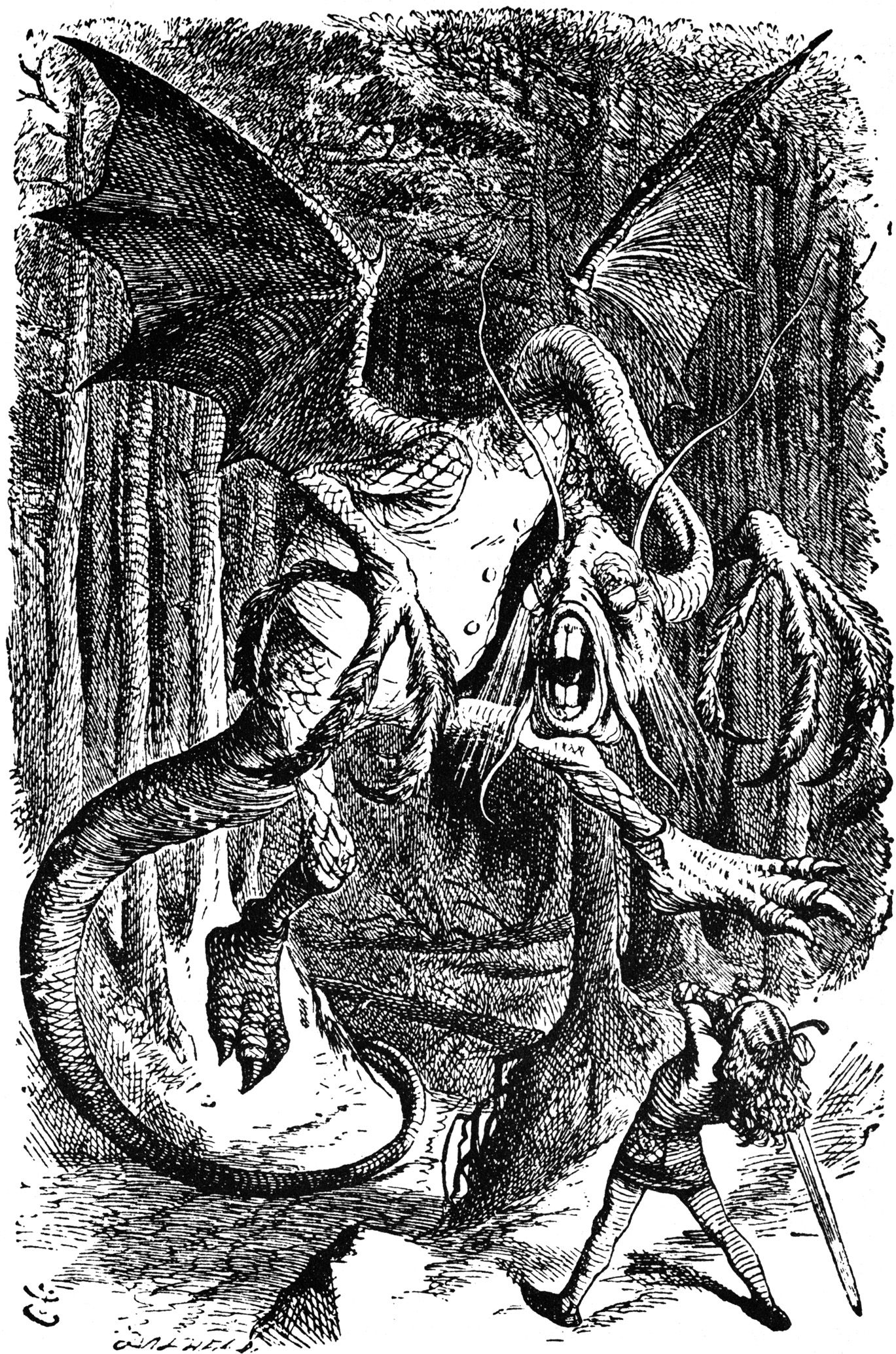 An original illustration of the Jabberwocky, from Through the Looking Glass and what Alice found there, drawn by John Tenniel. from www.alice-in-wonderland.net

The Buddhism/physics connection has been a popular meme of journalists and pop science writers for more than thirty years. Martin Gardner, who wrote for many years in Scientific American, once compared the words of one such author to Lewis Carroll’s “Jabberwocky”: “As Alice remarked,” he said, “they seem to mean something, but it’s hard to pin down just what.” (Gardner was also the author of The Annotated Alice.)

I found reading philosophers during my Jesuit studies to be very, very difficult. At first blush their works also reminded me of Jabberwocky. With some patient teachers, however, I was able eventually to get a glimmer of the wisdom behind their verbiage. Unlike physicists, philosophers can’t fall back on equations to get their point across; and so often they write not to much to be understood, but rather to guarantee that they will not be misunderstood – that the only possible meaning one can extract from their words is in fact the meaning they intended. This does tend to result, however, in challenging sentence structures.

Truth in science does not necessarily lead to truth in theology. But at least it can help you recognize truth by showing you what truth tends to look like. In both my science and my religion, I am used to finding important truths poorly understood. My master’s thesis tried to describe the moons of Jupiter with computer models that I now know were fatally flawed; but the subsequent Voyagers to Jupiter found pretty much what I predicted there. Our theology of original sin has serious difficulties, but anyone who denies the reality of original sin hasn’t been reading the news lately. In both cases, we know ahead of time what the answer ought to look like; the role of the theorist, in science and theology, is to try to explain what we already are pretty sure is true. And we never get it entirely right.

Just because something is very hard to grasp, doesn’t mean it’s nonsense. But it also doesn’t mean it’s true. Before I commit to studying an advanced philosopher (or physicist) I need a certain faith that the effort will be worth the struggle. I can only have that faith by having teachers I trust. That’s why I spent so many years studying at MIT, rather than trying to pick up physics on my own out of a book. That’s why I belong to a Church.

95  |  Across the Universe: Waiting for the Call