This column first ran in The Tablet in September 2013

At the annual European Planetary Science Congress [held in September 2013] in London, I was chatting with some postgraduate students about their studies of Jupiter’s icy moon, Europa. It’s the target of the Jupiter Icy Moon Explorer mission that the European Space Agency hopes to launch in 2022. Europa’s subcrustal oceans may be the best place in our solar system to look for non-terrestrial life forms – an idea that I can claim credit for first proposing in print in 1975, based not so much on my computer models as on all the science fiction I’d been reading. 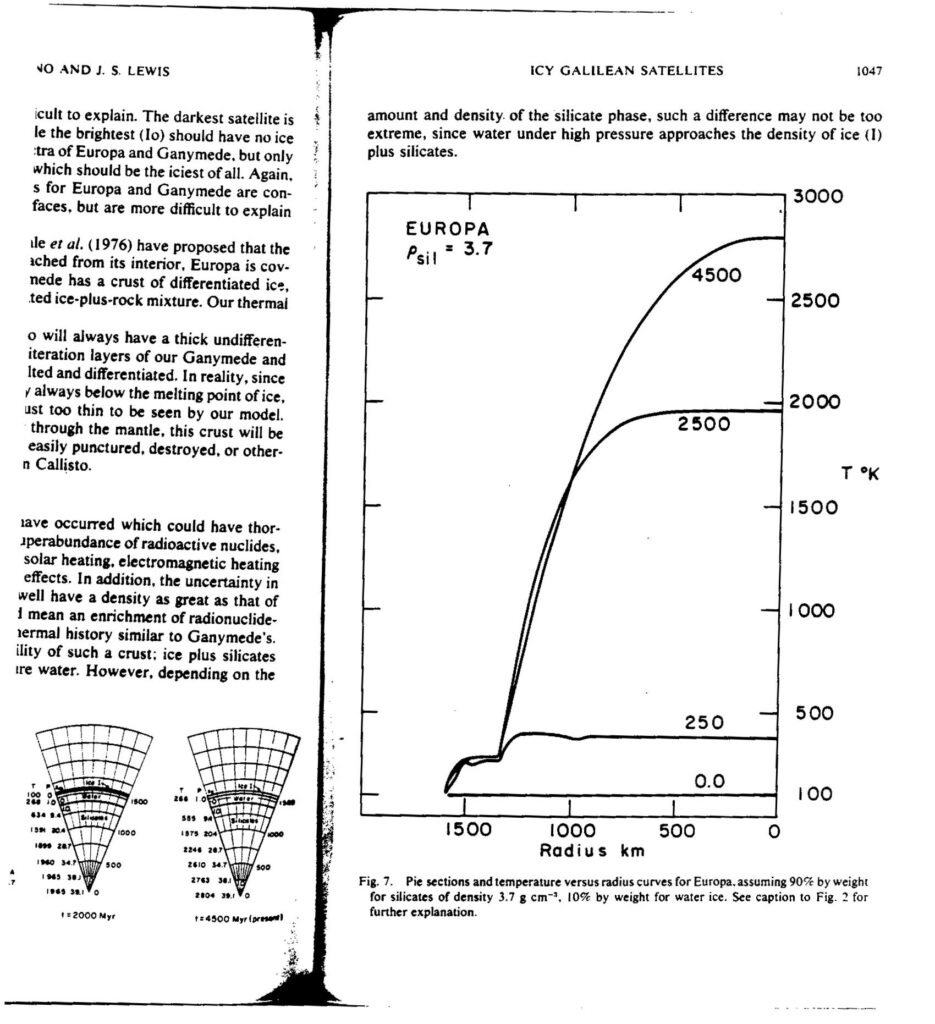 This page from a paper I submitted more than 40 years ago, based on my MS thesis with John Lewis at MIT, shows how crude our models (and ability to draw figures) were in the days before PCs…

It’s exciting to see a crazy idea of mine (and, to be honest, of many other folk) turned into a space mission. But it’s sobering to realize I will be 78 years old in 2030, when it arrives. Indeed, not only were those postgraduate students not yet born when I had made my models, they hadn’t even been born by the time my models were obsolete.

NASA artist’s rendition of Voyager 2. “Voyager 2 is the only spacecraft to study all four of the solar system’s giant planets up close. It is now exploring the outermost reaches of where the solar wind and the sun’s magnetic field dominate space. In September 2007, it crossed the termination shock (where the speed of the solar wind drops below the speed of sound) at 84 AU (more than twice the distance to Pluto).”

I had based my models in 1975 on two data points and a lot of imagination. (Hence the science fiction.) The Pioneer 10 spacecraft had zoomed past Jupiter in 1973, but far from Europa; likewise Voyager 1 in March, 1979 targeted other moons in Jupiter’s neighborhood.  Only Voyager 2 got close enough to Europa, in July 1979, to send back the first decent images of its cracked icy surface… and data that indicated my models were probably right for the wrong reasons. (Europa produces and transports heat in ways I hadn’t imagined in 1975.) The magnetometers on the Galileo orbiter in 1996 finally detected a faint deflection of Jupiter’s magnetic fields, signaling the presence of a conductive salt water layer beneath Europa’s crust.

Magnetic fields and the Voyager spacecraft were also in the news [in September 2013]. It appears that finally, after many false calls, Voyager 1 really has exited the bubble of the Sun’s magnetic field and entered the plasma of interstellar space. A human artifact is now, in a real sense, voyaging among the stars.

The place where the flowing water is balanced by the standing water, is analogous to the heliopause

This idea of a “magnetic bubble” can be illustrated in any household sink. [See a previous post about that, here.] Turn on a tap and let the water run onto the sink’s flat bottom. You’ll see a disk of water rushing out away from the spot where the stream hits; from this spot, the circle of water rushes out into an every larger area. Since the same amount of water has to cover a wider area, it moves ever more slowly as it moves outwards. The disk of outrushing water stops, suddenly, at a ring of apparently still water. That’s where the weight of the still water is exactly balanced by the onrush of the falling water.

In the same way, the Sun produces a hot plasma called a Solar Wind that pushes outwards in all directions, carrying the Sun’s magnetic field. But as it blows out into wider space, its “ram pressure” drops away, though in this case the it’s the wind’s density, not its speed, that decreases as it expands. This bubble of solar plasma and magnetism stops when its pressure is so low that even the weak static pressure of the gases between the stars can match it. That’s the boundary Voyager crossed this month.

Voyager is still within our solar system; it won’t reach the Oort cloud of comets for another 300 years. But nonetheless this boundary is a milestone. In contrast to the cosmology of the ancients, who imagined a barrier between the fallen Earth and the perfect stars, we and the stars are physically connected, able to touch one another. It reminds us that we – and whatever lifeforms are swimming about inside Europa, or anywhere else – operate under rules that are the same on Earth as they are in the heavens.