This column first ran in The Tablet in January 2015

Every year, the University of Arizona’s College of Sciences puts on a public lecture series; the 2015 theme was “Life in the Universe”. Given my ability to deliver good entertainment (my ancestors were in Vaudeville) I’ve been asked to present the opening lecture: “What is life?” 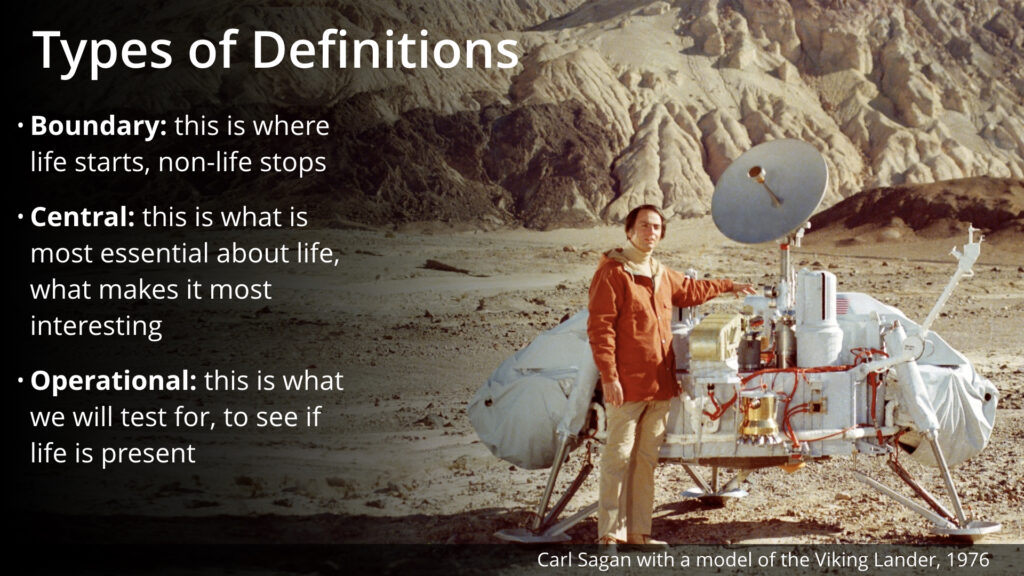 Defining life is nearly impossible. Even defining what works as a definition is not trivial. Sagan’s Viking lander was too specific and gave ambiguous answers.

My background is extraterrestrial geology, not biology. When biologists define life as the chemistry of complex long-chain hydrocarbons, I think of my favorite complex framework silicate mineral crystals, like plagioclase. If life were nothing more than complicated chemistry, then why not offer a seven part lecture series on Plagioclase in the Universe?

Of course, no one would show up.

Yes, life is complex chemistry. But to limit one’s view to mere chemistry misses the truth behind why lectures on life would draw a better crowd than lectures on minerals. It also neglects the underlying truth of why we scientists are fascinated by the subject  – and why our funding agencies pay us to do the work.

Not surprisingly, a survey of typical definitions of life (one source gave 48 different suggestions, dating back to the mid 19th century) shows that they come in two types. Some are so general that one can easily find counter-examples that don’t fit the rule. “Multiplication, heredity, and variation”? Mules don’t reproduce; for that matter, neither do celibate Jesuits, or dual-income-no-kids Yuppies. But pour enough silica, alumina, and trace elements into a lava and you can crystalize lots of variant forms of plagioclase. Meanwhile, other definitions are so specific (“the coupled cycling of bioelements in an aqueous solution”) that they would likely fail to recognize the very sorts of alien life forms that we’re trying to discover. It’s tough to find a definition that includes possible exotic biota on Titan but not computer viruses.

When challenged (usually over a beer after work) most exobiologists shrug and admit that, as Justice Potter once said about pornography, we can’t define it but we know it when we see it. Thus, rather than trying to pin down life’s precise boundaries, let’s consider some of the traits that make us think we’ve seen it.

Life is change. But life’s changes are not simple, not something you can measure on a linear scale. Living things change for both better and worse, simultaneously: consider the wisdom and power of a frail old man like Pope John Paul II in his last days. When animals move it is neither repetitive (like a robot) nor random (like a robot with a random number generator making its decisions). A cat on the hunt can be surprising and yet, in retrospect, understandable. Meanwhile, the cat’s next move will still be unpredictable.

In looking for life on other planets, we don’t yet have the imaging resolution to spot and follow exo-cats, much less converse with the elders of their species. The best we can do is find the chemical tracers that, in our experience, mean life.

Our bodies burn oxygen. What’s unusual is that the burning is slow enough to let us lead interesting lives before we’re consumed… and that there’s free oxygen available to be burned. Looking for atmospheres with unstable ingredients like oxygen may be our best way of spotting planets with life.

And once we’ve found examples of life elsewhere, perhaps we will have a better idea of what life here on Earth is actually about.

164  |  From the Tablet: Galilean Entanglements