This column first ran in The Tablet in April 2013

The Kepler Space Telescope, monitoring a hundred thousand stars to catch the faint flickers of light that might indicate the shadows of planets, announced [April 2013] the discovery of a star that may have two super-Earths orbiting within its “Goldilocks zone.” That’s the distance from the star where liquid water should be stable. The idea of a system with two planets that could harbor life brings up all sorts of exciting science-fictional possibilities. 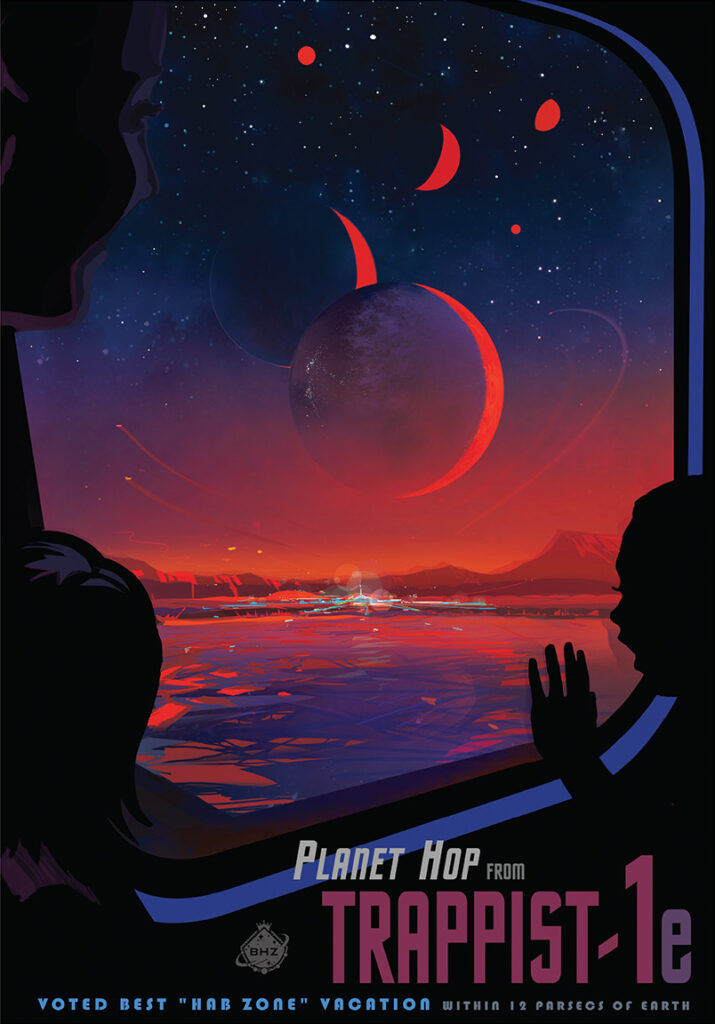 We may not know if any Goldilocks planets really are suitable for life, but we can dream… (NASA poster)

Well, maybe. We don’t know for sure yet that either planet really is Earth-like; they could be small gas balls. We don’t know yet if either planet has an atmosphere, much less the sorts of chemicals we associate with life. And after all, our own solar system has two bodies within its Goldilocks zone – Earth and its Moon – but only one has life. For that matter, Mars is close enough to that stable zone that some alien H. G. Wells observing our system from a distance could well have invented stories of inter-species interactions that, alas, are only fiction, not science.

Further afield, observations dating back to the 1930s have shown that stars of other galaxies are being pulled in their orbits by something more than the masses of the stars themselves. Indeed it looks like this “dark matter” is far more abundant than ordinary matter. But what is it? One prime theoretical candidate for dark matter has been dubbed “Weakly Interacting Massive Particles”, or WIMPs. (The other theory proposes Massive Compact Halo Objects, or MACHOs. Yes, really.) Also in April 2013, two different experiments announced that they’ve discovered actual evidence of these WIMPs. Detectors buried deep in a mine in Minnesota, where they are shielded from more mundane cosmic rays, recorded events that they interpret as WIMPs; and the Alpha Magnetic Spectrometer on the International Space Station, which detects all sorts of cosmic rays, has found an excess of anti-matter positrons that they interpret as the products of the collision and destruction of WIMPS.

Well, maybe. The head of the Minnesota team admits, “We do not believe this result rises to the level of discovery. But it does call for further investigation.” In fact, all they found were three events (over several years) when chance suggests 0.7 events; intriguing certainly, but within the realm of random fluctuations of otherwise ordinary detections. And the Space Station scientists admit that there are plenty of other possible sources of the positron excesses, such as rapidly spinning pulsars.

Skepticism of extraordinary claims reported in the newspapers is always safe. Science rarely advances in the kinds of spectacular breakthroughs that are easy to report. But the opposite danger is the cynicism that can grow when too many of these stories turn out to be over-hyped. Forget the hype; the science itself is good science, even if the path from “possible” to “confirmed” is an uncertain one. These claims could be right. Or they may well be the sorts of mistakes that wind up telling us important new truths… as long as we admit we were wrong.

Without goals like habitable Earths or actual dark matter particles, we wouldn’t do the hard work that produces these elusive results. But it’s possible that emphasizing one exciting possibility (“Wimps, at last!” “Pairs of Earths!”) might overshadow an equally exciting possibility (“spinning pulsars everywhere!” “Gas dwarf planets!”).

The trick is knowing how to continue, given such provocative but inconclusive results. Knowing when to persevere, or when to give up and admit that what you’ve been seeing is something different than you expected, is what separates the good scientist from the crank who is convinced his first idea is always right. It’s never an easy judgement.

Since this article was written, many more planets in “Goldilocks” zones have been discovered, including perhaps three in the Trappist-1 system. Maybe. Meanwhile, further efforts to detect WIMPS have come up empty... We’re still waiting for a road-to-Damascus experimental result.