This column first ran in The Tablet in September 2015

Eighty years ago, on September 29, 1935, Pope Pius XI dedicated new quarters and telescopes of the Vatican Observatory in his summer palace in Castel Gandolfo. To celebrate the anniversary,in September 2015 we held a symposium in Castel Gandolfo, including a visit to the old domes that Pius XI had dedicated. The party ended in a private audience in Rome with Pope Francis (less than 24 hours before he left for Cuba and the US).

After giving us a short address, the Pope looked up and caught my eye. He smiled, and said, “Ah! The New Director!”

It’s true. As of that day, I became the new director of the Vatican Observatory. (I actually didn’t completely believe it until I heard him say it.) 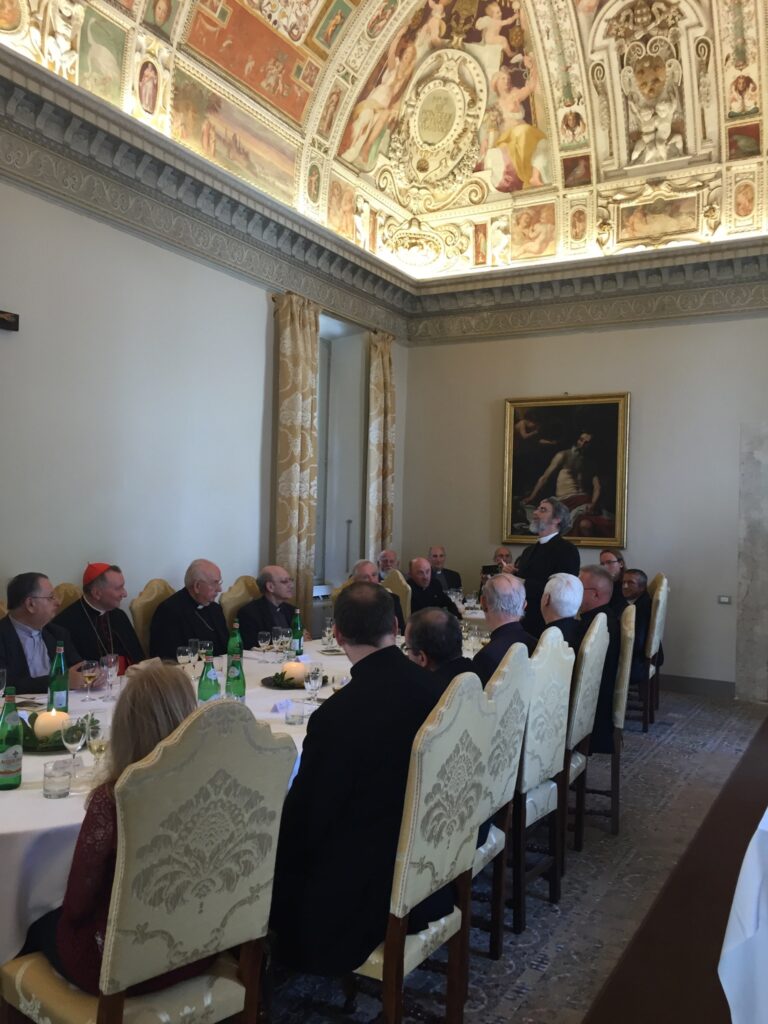 Lunch with the Cardinal Secretary of State in the hall of the Pontifical Academy of Sciences, celebrating my new appointment as director, in September, 2015. Ignore the goofy guy with the beard telling a joke; check out that ceiling!

Would I continue to write articles like these (for the Tablet)? Yes, as long as there’s a place for me. It’s not only because I love being a part of this journal. When Pope Leo XIII founded the Vatican Observatory in 1891 it was so that “the world could clearly see” the Church supporting good science. Doing good science is, obviously, essential; otherwise we have nothing to show. But the “showing” is also essential.

We’ve done that in an ad-hoc way for the past 20 years. Now I am trying to organize a more systematic approach to our education and public outreach. We’re developing programs from a Faith and Astronomy Workshop for parish educators [the next one will be held in a year’s time, January 2019], to a range of high school collaborations, to our Catholic Astronomer blog page. My columns are part that work.

A lot of my outreach has always been through public talks at churches, schools, and science fiction conventions. For example, the summer of 2015 summer I was a Guest of Honor at a convention in Chicago for folks who like to tinker and invent; then, at the Sasquan World Science Fiction Convention in Spokane that August, I gave the keynote science lecture, part my duties as this year’s Carl Sagan medalist. [In 2017 I was guest of honor at two science fiction conventions!] Alas, once I learned of my new job I had to cancel three weeks of talks in the UK; I needed to be here to sign all the paperwork and learn where the gears and levers of the new job are to be found.

Such events as science fiction conventions are an ideal place to talk about science. Here you find bright and curious folks who love to hear about astronomy and place it in the human context. That context, after all, is what science fiction is all about. The human context includes religion, in all its forms, organized and personal and everything in between. 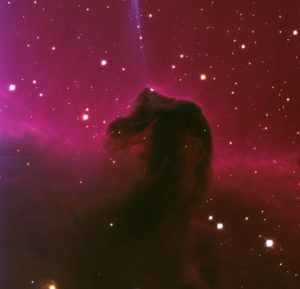 Just another gratuitous pretty astropicture, in this case, the Horsehead Nebula as imaged at the Vatican Advanced Technology Telescope.

That context figured strongly in our symposium as well. Historians and philosophers spoke eloquently of how doing science shapes the scientists (and their culture). But even the astronomers pointed out, time and again, that human decisions are required at critical points in our work, from choosing our experiments to reducing our data. The active involvements of each Pope in our work during all those years reminds us of the importance that they attached to our work. After all, this Observatory was a Pope’s idea, not ours!

But we do this work not just because a Pope wants us to do it. All the outreach we do, from science fiction conventions to think-pieces in intellectual journals, reflects another quality that motivates everything we do in astronomy: a sense of joy. The stars are glorious, and it’s a treat to be engaged in their study… because, their glory proclaims the Glory of their Creator.

Astronomy is a joyful profession, and I intend to have fun at this job. To quote the poet e.e. cummings: there’s a hell of a good universe next door; let’s go!

149  |  Across the Universe: Clouds of witnesses