This column first ran in The Tablet on October 2014

The Philae lander from ESA’s Rosetta spacecraft (see “Ice Dreams”) has arrived – and bounced – on comet 67P/Churyumov–Gerasimenko, generating a big splash of planetary science media coverage. It’s still too soon to know what scientific results we’ll get from the lander, or even if it will wake up when sunlight hits it, possibly in December. It did, but only briefly In fact, it will take years to digest the data. And after another few decades, other comet missions will come along to fill in the shadows of what Philae missed. 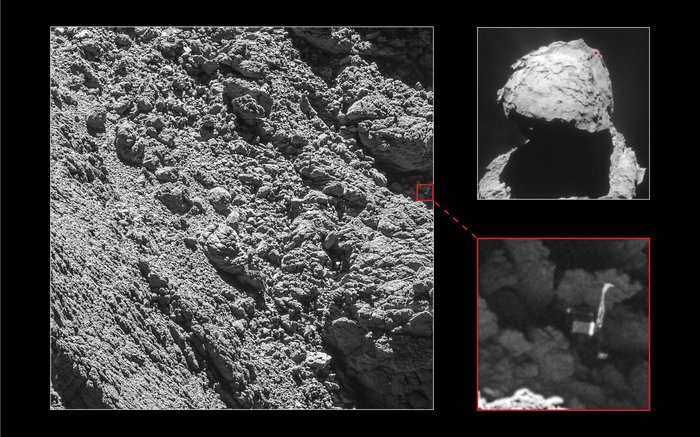 The landing occurred right in the middle of the annual meeting of the American Astronomical Society’s Division for Planetary Sciences, held [in 2014] in [the Vatican Observatory’s American] home town of Tucson, Arizona. All the wonderful new science presented at this meeting went by me in a blur — it will take a while for me to digest that, too — but my personal highlight was when I was given the Carl Sagan medal for “public communication in planetary sciences”… in honor of, among other things, writing regularly about planetary science in places like The Tablet.

What does winning a medal like this really mean? Friends have asked me if my parents were proud; I suspect they were mostly bemused. I’ve sat on the committee that gives out such awards, so I know how these choices are made. I had every reason to be nonchalant. Instead, I was overwhelmed.

Accepting the medal, I stammered through a few Carl Sagan anecdotes. Sagan was the first active scientist to embrace the media. He wrote popular books, appeared on TV talk shows, and then produced his own television series, Cosmos, pioneering the way for modern celebrity scientists like Brian Cox and Neil DeGrasse Tyson. He wasn’t afraid to show his enthusiasm for the work he did, and in the process he inspired a generation of scientists — including most of those attending this year’s DPS meeting. Sagan was also an outspoken skeptic of religion, feeding the stereotypes of journalists, and adding a certain irony to a Jesuit brother winning the award this year.

I first met Sagan when he was young and enthusiastic. Over the years I also saw the man whom fame nearly devoured; for a while in the 1980s, even his friends called him “King Carl” behind his back. But after a trail of broken friendships and several failed marriages, in the 1990s he had to face his own mortality: a terrible cancer likely caused by the organic compounds he worked with, in his lab exploring the possible origins of life in space. When I last saw him, in 1995 (a year before his death) he’d become much more humble, much more gentle. 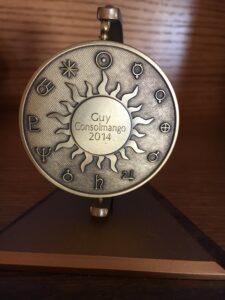 Both the Sagan medal and the Philae robot on the comet are just lumps of metal; why do we place such value on them? Certainly, in the case of Philae, the way ESA has anthropomorphized its conversations with its “mother” spacecraft while the lander “went to sleep” has helped us make an emotional connection. Is this a sign of a shameful irrationality, or the delightful sense of fun that Sagan at his best so embodied?

For me, the medal was nothing compared to the applause of my colleagues in the audience when I received it. But in both cases, the physical thing — robot or medal — became the real presence of something otherwise intangible: approval, adventure, a yearning for something outside ourselves.

Meanwhile, I am reminded that awards are like poison: safe as long as you don’t swallow them. (I checked — the medal does not unwrap into a disk of chocolate.) To keep a balanced perspective of the repute I have among my peers, I need only look at the back of the Sagan Prize Medal where my name is engraved… spelled wrong.