This column first ran in The Tablet in April 2012

“This isn’t rocket science…” It’s a common reproach, heard when we make a simple task too complex.

Another flaw in the cliché is that it assumes launching a rocket is the height of complexity. In fact, it’s a well-understood piece of engineering. Today’s rockets are marvelous pieces of machinery, and getting it right can indeed be harder than it looks (see the recent failure of North Korea’s attempt). But the basic principles are nothing new. The rockets that lift supplies to the International Space Station today are Soviet designs dating from the cold war, more than half a century old.

The issue, as the North Koreans can attest, isn’t knowing what to do; it’s actually doing it.

That’s not an unusual situation in space science. Our study of meteorites has convinced us that any of the thousand asteroids whose orbits bring them close to Earth – comparable to the distance from the Earth to the Moon – will have enough iron and nickel and rarer metals like platinum and iridium to provide for humankind’s needs for the centuries. Actually getting up to such an asteroid and mining it for its valuable minerals is another matter entirely, however. 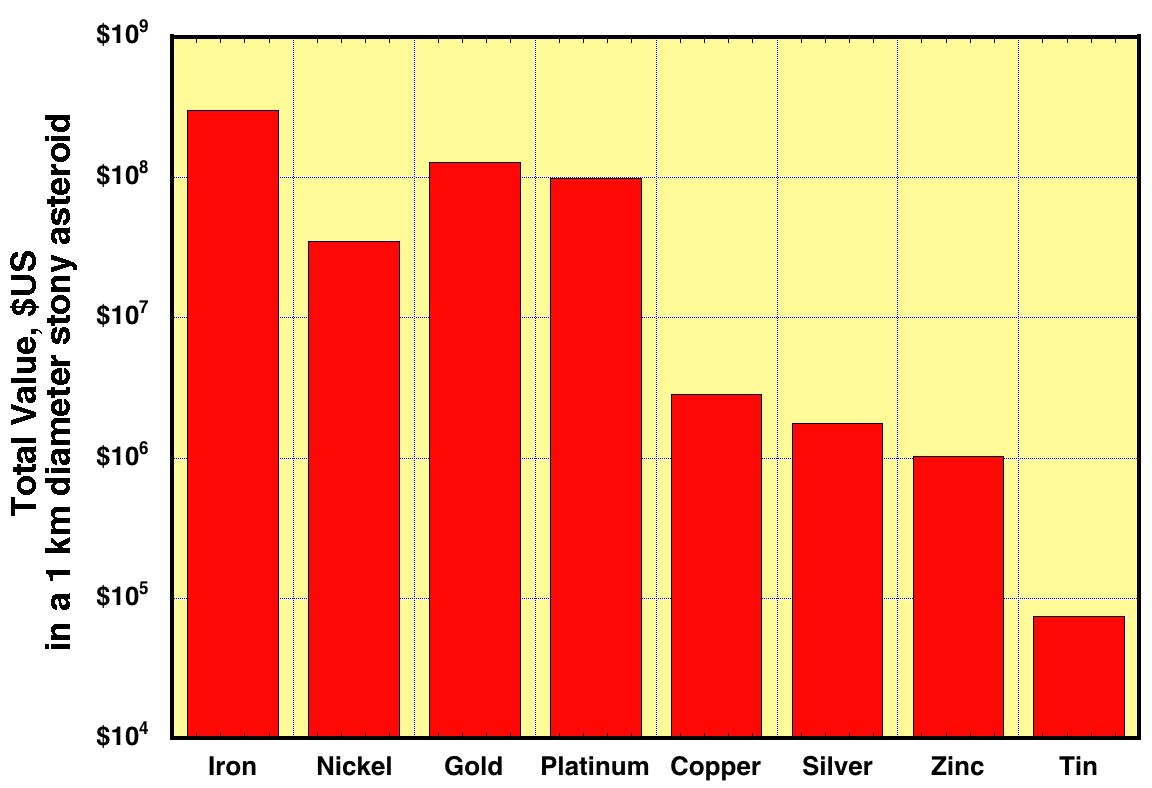 Every calculation for the mineral worth of an asteroid gets a different answer. I came up with this one for a talk in 2016. Don’t take it too seriously. In fact, some folks now think that the water in an asteroid might be the first material to be commercially exploited, by people already in space who would want the oxygen to breath and the hydrogen as fuel.

It’s not that we don’t know, in principle, how to do it. Forty-plus years ago we were able to send the Apollo astronauts as far from Earth as some of these asteroids come. And not long ago a Japanese robot spacecraft brought back to Earth a few grains of asteroid Itokawa, which is not close to Earth at all but out in the asteroid belt. But mining an asteroid commercially requires a large investment of money (and time and human effort, which presumably the money can buy).

Certainly plenty of people have looked carefully into how this could be done. My old advisor at MIT, John Lewis – now retired – spent the last thirty years of his career in planetary science working out the details of exploiting space resources. The result was a successful NASA grant and several fascinating books; but, alas, no asteroid mines. 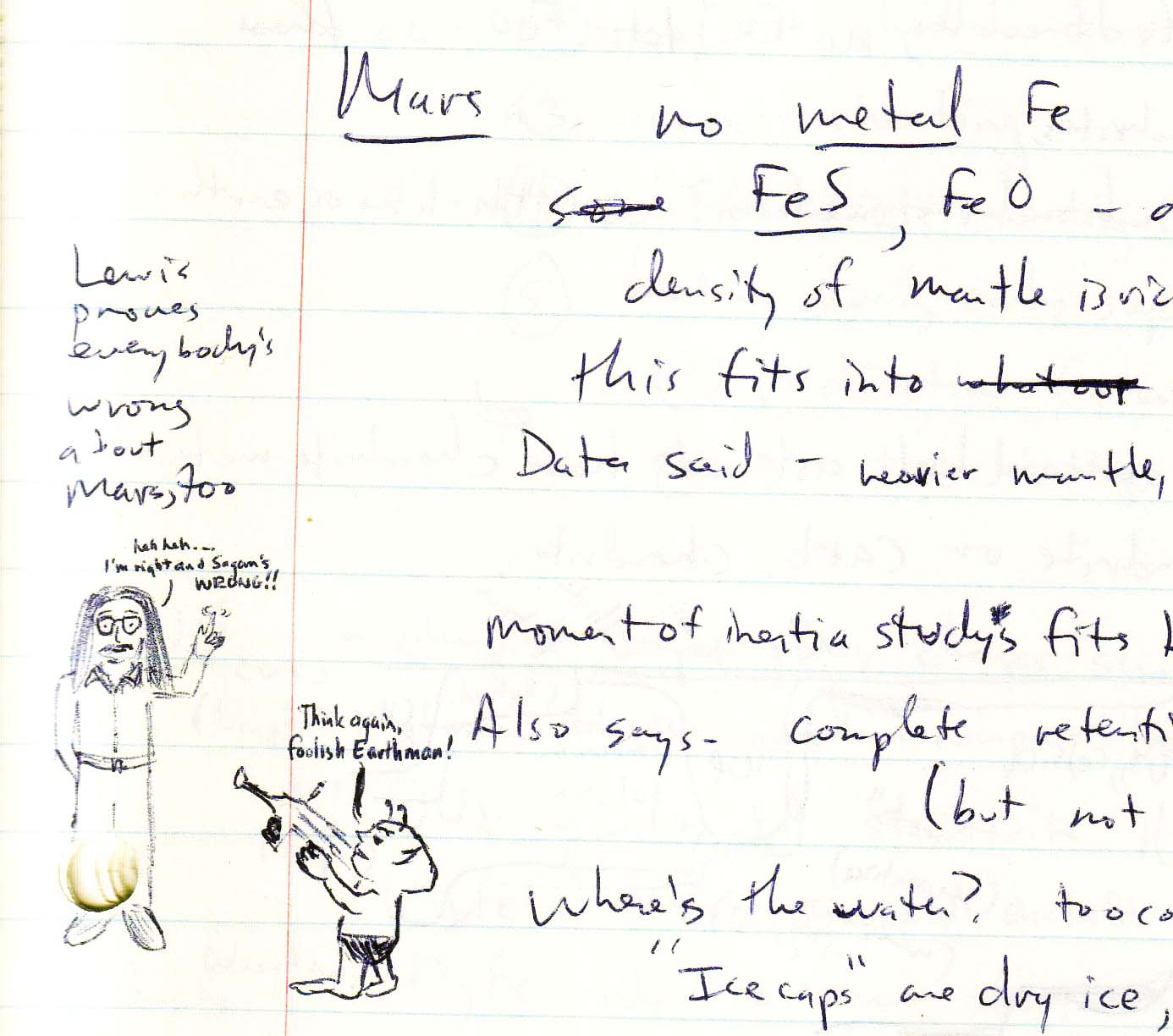 In 1973, my classmate Greg Ruffa borrowed my notes from John Lewis’s class on planetary sciences and returned them to me with various cartoons inserted… this is a pretty good depiction of what John Lewis looked like back then!

This past week [April 2011, that is!], though, a group of wealthy space enthusiasts including the filmmaker James Cameron and Microsoft billionaire Charles Simonyi, along with other veterans of private spaceflight ventures, have announced the formation of a space exploration corporation, Planetary Resources, Inc. Their plans as of this writing are still vague – the company will ‘help insure humanity’s prosperity… create a new industry and a new definition of “natural resources”…’ This sounds like asteroid mining to me. One of their announced advisors is the retired astronaut Tom Jones, also a student of John Lewis (we’ve been scientific co-authors), who has written that “asteroid resources are the key to industrializing near-Earth space.”

Living and working in space, rather than just visiting as tourists, will also mean overcoming all the expected human problems. For example, it requires re-thinking, or at least a creative interpretation, of a long-standing UN treaty banning the commercial exploitation of space. While mining asteroids may well save Earth’s environment, it might also destroy the economy of mineral-exporting (mostly poorer) nations. And where humans go, greed and envy and all the other sins will inevitably follow. C. S. Lewis once famously proposed that humans should stay quarantined on Earth, rather than spreading sin into space.

But there’s nothing new about those problems. And if implementing their solutions is challenging, the solutions themselves are well known. Living a just life isn’t, after all, rocket science.

The field of asteroid mining hasn’t gone away since this was written in 2011; there are now several other companies involved. But it’s yet to bring back its first ingot from space…