This column first ran in The Tablet in July 2008

[In July 2008], the members of the Vatican Observatory spent a week contemplating our hopes and plans for the future while enjoying the views from an Italian retreat house in the Abruzzi. The highlight of the week was a visit from the then newly-elected Jesuit Father General,  Fr. Adolfo Nicholás. 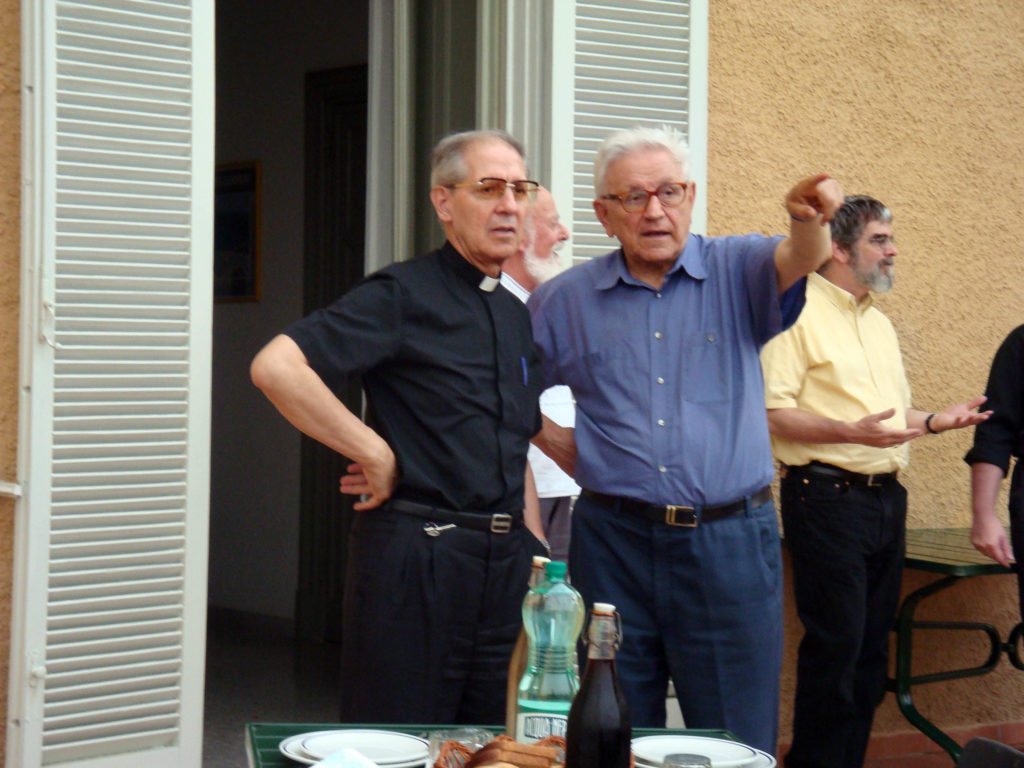 Fr. Nicholás, head of the Jesuits, chatting with Fr. Maffeo, retired physics teacher, at our old headquarters in the Papal Palace, back in 2008

In preparation for the General Congregation that elected him, we had prepared a number of documents suggesting that the Jesuit order take more notice of science and technology, both to answer the kinds of science and religion questions we get asked all the time, and to better minister to the growing number of people (in places like India, never mind the industrialized West) who make their living with computers and other high-tech equipment. It turns out, Fr. Nicholás had read those documents. When he spoke to us, he suggested that a new Jesuit order of studies should be developed that incorporates the sciences not just as one more course that young Jesuits in studies need to take, but within the weave of our philosophy and theology.

It sounds great. But what exactly do we really want every Jesuit to know about science?

We’re very good at teaching science to those small few who plan to be active scientists. But does a Jesuit working with refugees, or a parish priest, or a high school English teacher, need to know how to solve a second-degree differential equation? I can enjoy a production of Hamlet without being able to write iambic pentameters.

Maybe our best clue on how to proceed comes from the way that theology and philosophy are taught. At the end of ordinary studies, every priest is expected to know theology; only a few will ever have to do theology. But like theology, it is important that science not be presented as a big book of facts – or, worse yet, a big book of rules.

Our stereotype of science is huge rooms full of exotic equipment. But for every week I spend at a telescope I need to have months beforehand to prepare, and months afterwards to digest my results. Science is a process; science is a way of looking at the world. How do you teach that? And, let’s be honest; science does also have that big book of facts that you should at least know about, even if you don’t need to memorize it.

We scientists should never forget what drew us to the field in the first place. During our retreat in the mountains east of Rome, we took time off to visit the gigantic physics laboratory at Gran Sasso, buried deep underground (off a 10 km highway tunnel) to shield delicate experiments like the search for the mass of the neutrino from the interfering effects of cosmic rays. (The neutrino is a particle so insignificant that it barely interacts with the rest of the universe — which makes it so hard to detect. But its existence, and its mass, is essential to understanding the nuclear physics that makes the sun shine.) Yes, we were impressed by the science; but we also dug the hardware. Likewise, even after thirty years as an astronomer, the sight of a big telescope still thrills me.

Finally, we need to remind ourselves why a priest saying Mass needs to know about the neutrino’s mass. Certainly it’s for credibility. If someone representing the Church talks nonsense about science, then people will be less likely to listen to what he has to say about God and morality. Even more so is that true if the moral issues involve questions raised by science, from cloning to extraterrestrials.

But it’s also because these questions themselves have shaped our culture. And the questioning itself is part of what makes us human.

(This fall, the Jesuits will be electing a new Father General, as Fr. Nicholás has announced his retirement.)