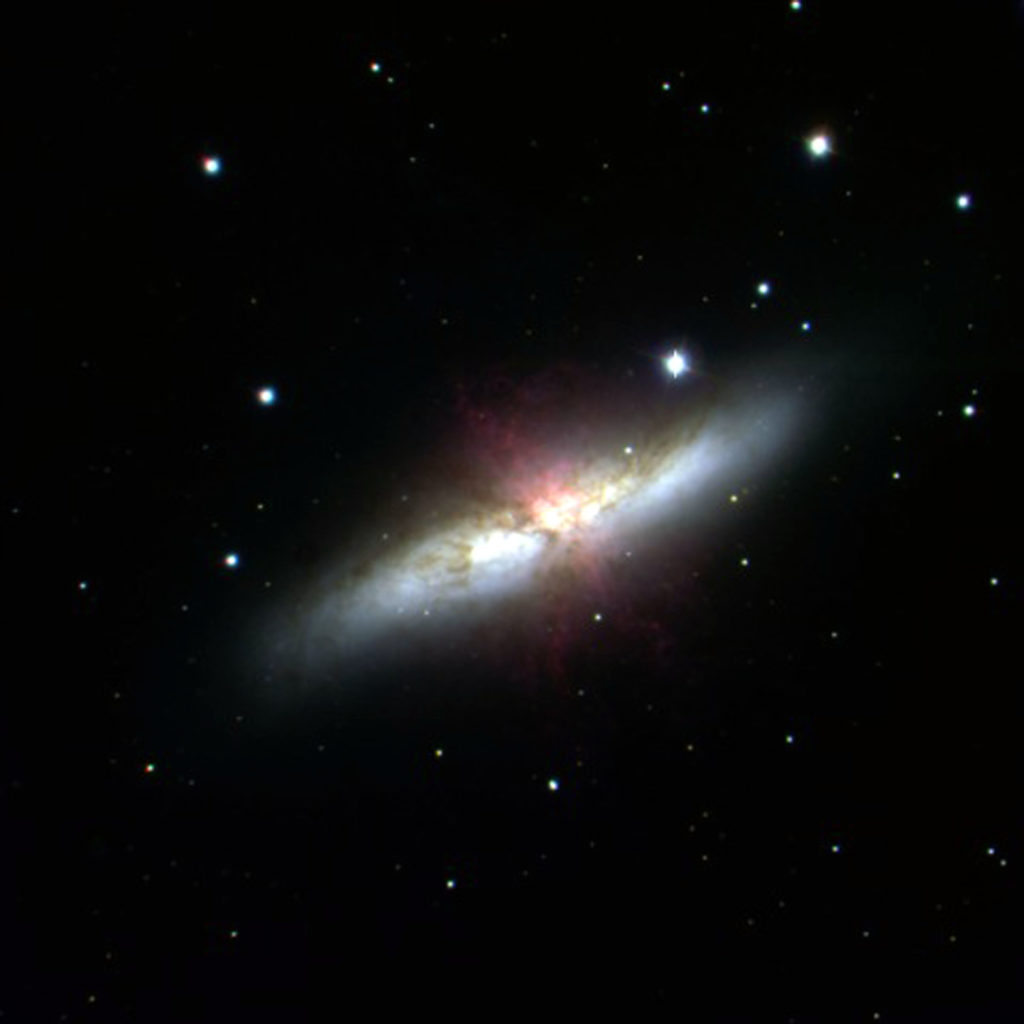 This image of the galaxy M82 was a joint project of the Vatican Observatory Foundation and students at St. Ignatius High School, Los Angeles. The students chose the object and sent the coordinates to Fr. Rich Boyle at our telescope, the VATT; he took the images in three filters, did the original processing to remove noise, and sent them back to the students, who did the final color balance process.

Galaxies whirled before us, their curled spiral arms lit up like Christmas trees with bright infrared dots where young stars were being formed from interstellar clouds of gas and dust. Meanwhile, in their central bulges, streams of similar gas and dust were feeding the maws of  supermassive black holes, emitting high energy radiation in their death plunges. Looking at galaxies ever farther away in space, we could trace out ever further back in time the evolution of galactic clusters from filaments of matter shaped by energies we didn’t even know existed [twenty] years ago, which we must merely label as “dark”.

We saw the swirling convection of a collapsing stellar core as modeled by a computer that almost, but not quite, reproduced the explosion of a supernova bursting as bright as any one of those galaxies. Not quite reproduced; because our models aren’t quite right yet. We have not yet discovered, mathematically, the way that nature has found to make these explosions. It’s hard to blow up a star. But we see the explosions; and I see their embers in my meteorites.

At the other end of the size spectrum, cool red M-dwarf stars are being discovered that dim slightly, in a regular pattern, as planets move across their disks. Planets closer to those stars are easier to spot: we can see them crossing more often. But since these are stars cooler than our Sun, the closer regions are in fact where temperatures more amenable to life are to be found. Yet that close in, the stars can raise tides on the planets that may massage their interiors and produce endless volcanoes on their surfaces; surfaces far stranger than even my favorite science fiction stories have yet imagined.

These were among the review talks presented [in 2009 – ten years ago now!] at the 27th General Assembly of the International Astronomical Union, a gathering in Rio de Janeiro of two thousand astronomers representing more than a hundred nations. Most of our business was business: approving budgets, defining the best values of natural constants, planning how to bring astronomy to the Third World. But we also spent the time to hear from each other about what we’d all been up to over the past three years. 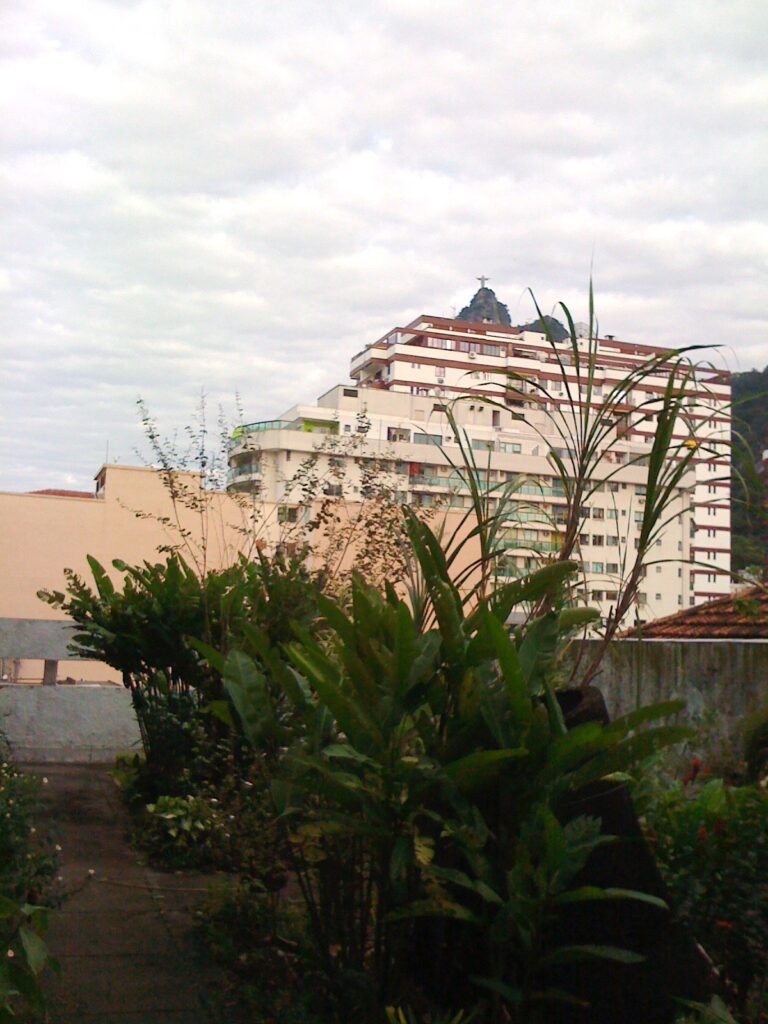 Yes, that’s the famous statue of Christ on the hilltop behind this building. I took this photo ten years ago, and I don’t remember what building this is!

And for some reason, after two weeks of listening to these talks, I suddenly experienced an Ignatian moment of apprehension [in more than one sense of the word!]. These galaxies, these supernovae, are real. Those planets are out there, right now. All this stuff was actually happening while I was dozing in the dark at the Rio Convention Center, and it keeps going on, even now, while I sit in my room pondering what’s for lunch and worrying if I’ll be able to get some sleep on the plane home tomorrow.

The universe is teeming, as lively as the streets of Rio in its daily samba about churches and street vendors. And yet it is also massively empty, like the ocean off Rio’s endless beaches or the jungle-covered mountains that separate the neighborhoods; tunnels through the mountains, like science fiction’s wormholes between the galaxies, are needed to carry the endless stream of taxicabs and adventurers.

The author of Genesis worshiped a God who had made mountains, trees, the oceans around them, and the moon and sun above. By itself that’s a pretty impressive God; no silicon valley inventor has been able to imitate that bit of creation, not yet. Yet astronomers have a bigger conception of the universe, whose Creator must be an even bigger God.

From the balcony of the Jesuit high school where we are staying in Rio for these two weeks, we can see the famous statue of Christ the Redeemer holding his arms to bless us all, sambas and supernovae. Above him, setting in the west, are the stars of the Southern Cross. 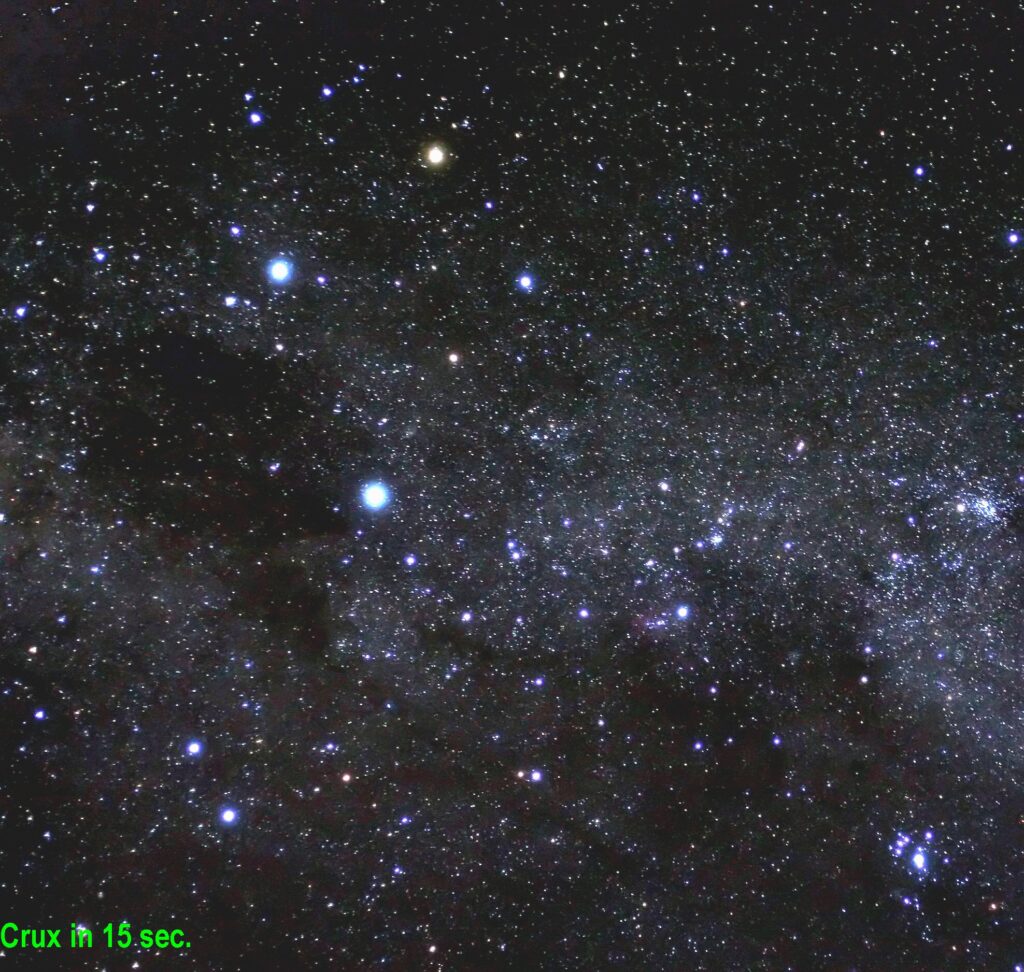 This image of the Southern Cross is by Jeremy Waller, courtesy of Robert Jenkins, of the Astronomical Society of Southern Australia

92  |  Across the Universe: Clouds from Both Sides