This column first ran in The Tablet in March 2015

Ceres was the first body found in the region between Mars and Jupiter now called the Asteroid Belt. In the late 1700s Titius and Bode had noted a pattern in planet positions that suggested there should be a planet in the gap between Mars and Jupiter; on New Year’s Day of 1801, Father Giuseppi Piazzi found Ceres from his observatory in Sicily. 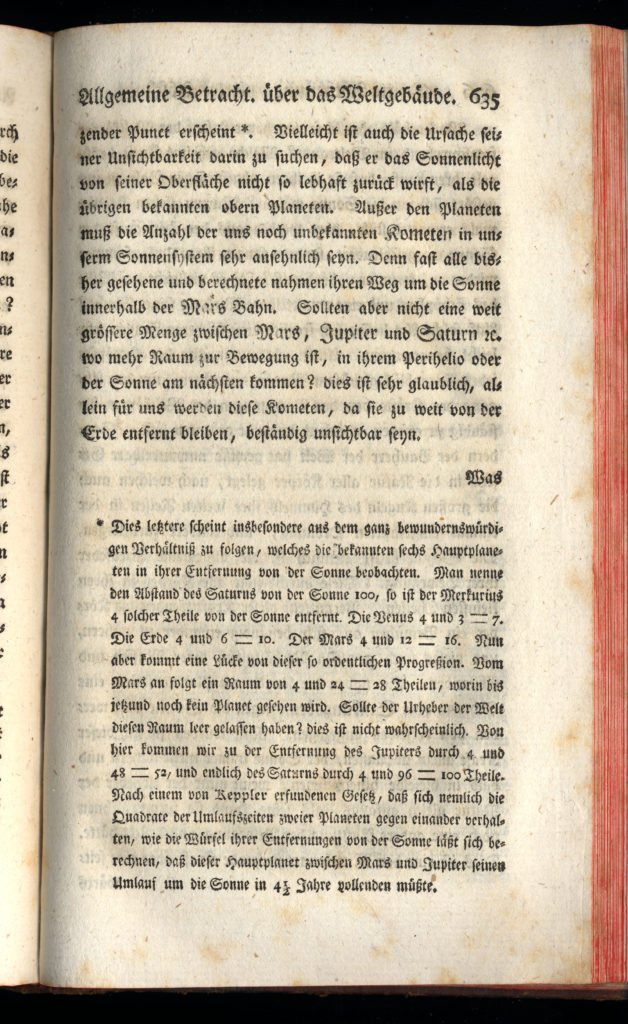 Bode’s Law appears in the footnote on page 635 of his book of astronomy, Anleitung zur Kenntniss des gestirnten Himmels (“Manual for Knowing the Starry Sky”) as seen in the Vatican Observatory copy here.

They expected a planet, so that’s what they called Ceres – though William Herschel, who had just discovered the gas giant Uranus, sniffed that such a tiny dot of light was neither planet nor star (Latin, “aster”) but a mere “asteroid.” Only fifty years later, when a number of other such small bodies had been found, did Ceres and the other asteroids get “demoted” to the status of “minor planet.” (And later work showed that the Titius-Bode pattern which predicted a planet at Ceres’ position was actually just a coincidence of numbers, not a reliable law.)

A mere 950 km in diameter, Ceres is indeed small – even Pluto’s diameter is two and a half times bigger and more than 15 times its volume – but it’s still by far the biggest object in the asteroid belt. It’s nearly twice the diameter and six times the volume of Vesta. We can measure its gravity’s tiny pull on Mars to estimate its mass, and we can just make it out as a disk in our biggest telescopes to get its diameter and volume, so we know it has a density somewhere between water and rock. We also know that, for its size, it reflects little light; its surface must be almost jet black, like a dark meteorite.

Indeed, this small size and dim surface made Ceres seem for many years a dull subject for study. But in 2006, when Pluto and other similarly-sized objects out beyond Neptune were recognized as a separate family of bodies called Dwarf Planets, it seemed reasonable to add Ceres to their number. So once again Ceres was re-classified. (Unlike Pluto, Ceres doesn’t have a vocal fan club so its repeated reclassifications have gone mostly unnoticed by the general public.)

A few years ago the Hubble telescope observed Ceres’ blurry disk to be slightly flattened. With a little fancy math (and some assumptions) you can compare the flattening with the spin rate to conclude that, unlike rubble-pile asteroids, Ceres was a solid body compressed by its own gravity, with a dense core. That implied its upper regions were full of low density stuff, probably ice, below a dust-covered surface. This idea gained traction when Esa’s Heschel Space Telescope, looking for water in our galaxy, stumbled on a detection of a plume of water from Ceres itself.

Dawn, approaching Ceres earlier this year, added the final touch: the discovery of two small white spots that many scientists are suggesting might be bits of ice poking through its dusty crust. Now we’re speculating that this fresh ice may indicate liquid water – and life? – inside this body, once thought so dull and uninteresting. 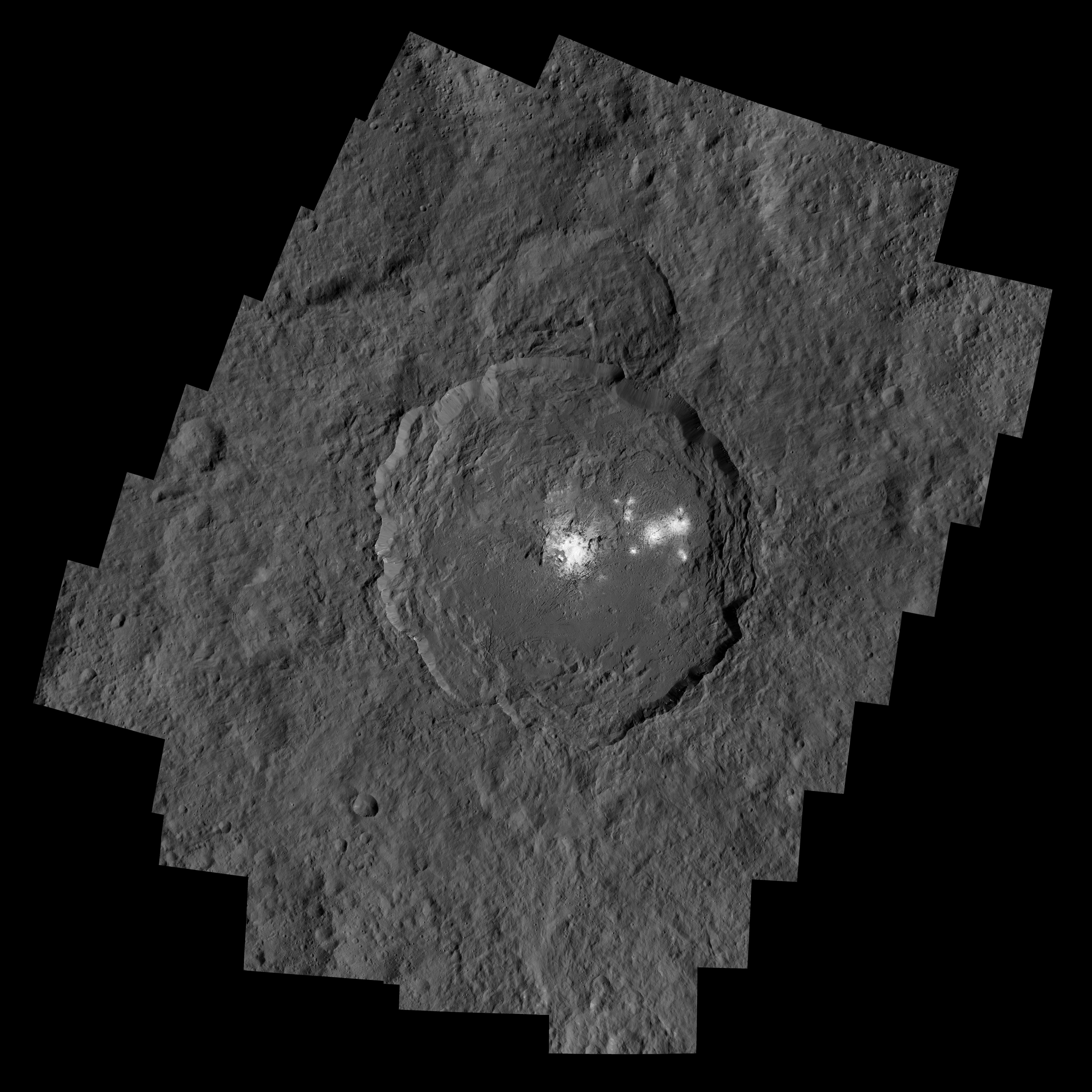 Occator Crater, measuring 57 miles (92 kilometers) across and 2.5 miles (4 kilometers) deep, contains the brightest area on Ceres.
Dawn’s close-up view reveals a dome in a smooth-walled pit in the bright center of the crater. A separate figure shows the bright spots in a mosaic of two Dawn images taken using a shorter exposure time to show details within the bright features that are overexposed, or nearly so, in the full mosaic. The images used to make these mosaics were taken from Dawn’s low-altitude mapping orbit (LAMO), 240 miles (385 kilometers) above Ceres. Credit: NASA

But we’ve only just arrived; it is far too early to jump to conclusions. Planet or asteroid or dwarf? Black meteorite, dusty ice ball, or a home for life? If we’ve learned any lesson from Ceres, it’s to take in what it shows you with an open mind, rather than assume you know it all ahead of time, and only see what you expect to see.

That would be like worrying over the empty Tomb, without noticing the Gardener standing beside you.

(Most recently, organic material has been found on the surface of Ceres; for the latest Ceres information, check out the Dawn website.)