Half the planets in our solar system are relatively small, rocky, and found near our sun. The other half are all significantly bigger, covered in giant atmospheres, and orbit far away from the sun. Explaining this trend in size and orbits is simple. If the planets formed from a disk of gas and dust (we’ve actually observed such disks around young stars) then planets forming farther from the sun are colder. 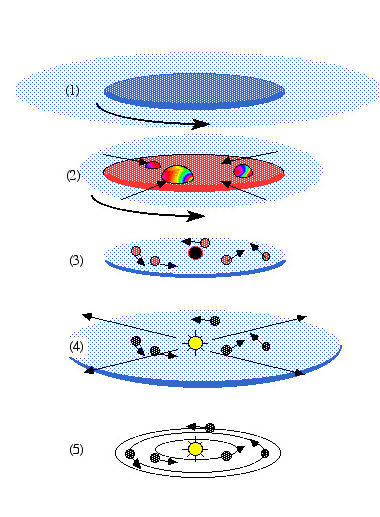 This cartoon is meant to illustrate the five stages of a solar nebula, the way we used to understand it. (1) A spinning cloud of gas and dust collapses into a disk, (2) forms protoplanets during further collapse, (3) which then accrete within the disk, (4) until the central condensation ignites as a star whose light pushes the gas away, (5) leaving fragments to continue their accretion

If they’re far enough from the sun that water in the gas freezes into ice, they’ll jump up in size — a gas cloud has twice as much water as rocky material to snowball into a planet. And once a planet reaches a critical size, it captures gas from the nebula to make a thick atmosphere. So, inner rocky planets stay small; but once the icy outer planets get big enough, they jump up to even larger sizes. The result: small rocky inner planets, giant icy outer planets, nothing in between.

That same idea can explain why the large moons closer to Jupiter, Io and Europa, are smaller and rockier than the bigger moons found further away from Jupiter, Ganymede and Callisto. When Jupiter formed, it must have been a source of heat similar to, if not as hot as, the forming sun. (This explanation totally fails to describe the compositions of moons of Saturn or Uranus, but never mind…) Thus the distant location of gas giants, and the huge size gap between Earth (the largest rocky planet) and Neptune (the smallest gas giant) can be explained with one simple model. That’s what I learned, forty years ago. It fit the solar system we saw.

Of course, we only saw one solar system, back then. (Two, if you counted the system of Jupiter and its moons.) But given what we’ve learned about the thousands of new exoplanet systems discovered in recent years, the picture is not so clear.

The problem was described at this month’s meeting of the Meteoritical Society by noted planet discoverer Geoff Marcy. About twenty years ago we first found “hot Jupiters” around other stars, planets as large as our gas giants but in orbits very close to their stars — closer than Mercury is to our Sun. Of course, these “hot Jupiters” were simply the easiest planets to detect, so even if they were very rare they’d be the first ones found. But the fact that any such planets existed at all, suggested that maybe some giant planets could migrate away from wherever they were formed — presumably those colder distant regions like where the gas giants live in our solar system. In fact, once we recognized that such migrations were possible, we realized that even our own giant planets may have moved about when our solar system was forming. 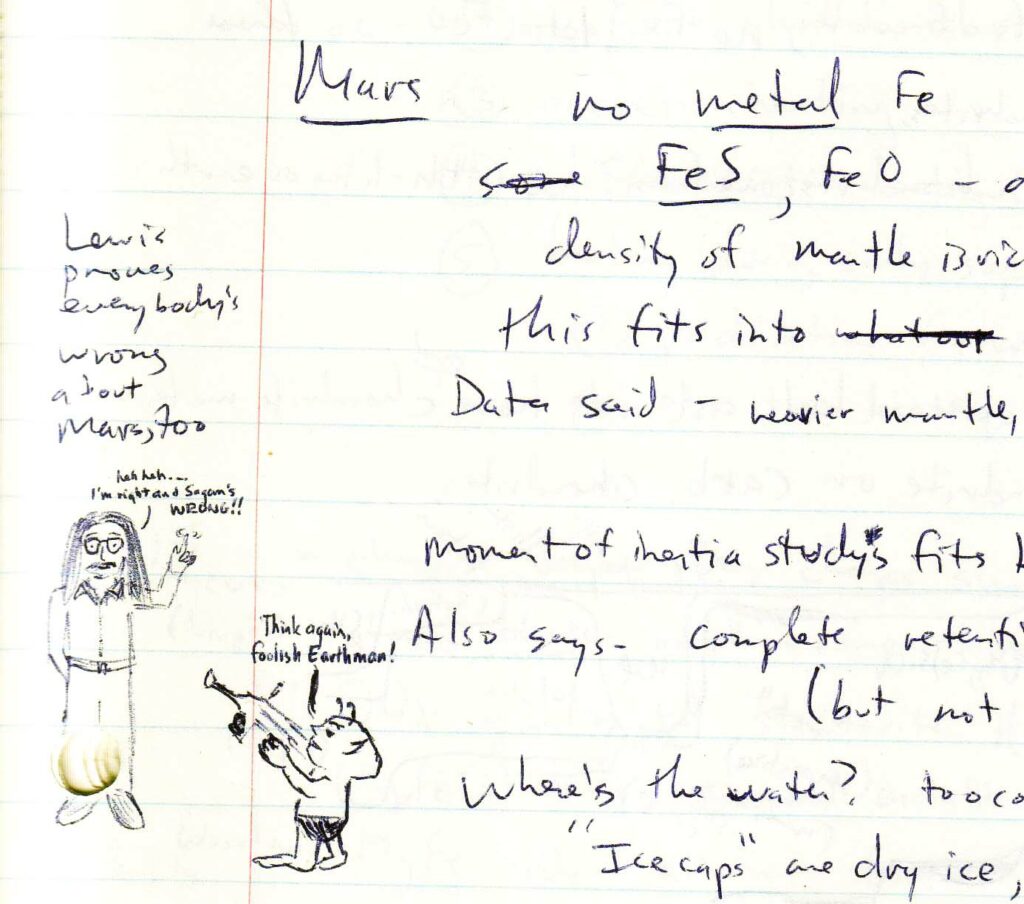 I learned all about how planets were formed… or at least, how they were supposed to have been formed… from Prof. John Lewis at MIT in 1973. At that time, my classmate Greg Ruffa borrowed my notes from John Lewis’s class on planetary sciences and returned them with various cartoons inserted. This is a pretty good look at what John Lewis looked, and acted, like back then!

And now, with two thousand exoplanets discovered, it turns out that hot Jupiters actually are relatively rare. Whew! But… it also turns out that, rather than planets being divided into either Neptune (and larger)-sized giants and (rarer, but harder to see) bodies smaller than Earth, instead the most common size of planets around other stars is exactly in the size range between Earth and Neptune. Our theories had happily explained the lack of such-sized planets in our system by showing they were “impossible.” Instead, such sizes are actually the rule.

Where did we go wrong? Is our science totally discredited? Hardly; science found the mistake and corrected it. Can we no longer believe our theories? We never did; that’s why we tested them with observations.

Our understanding of planets is naive, incomplete, in need of constant correction. But then, that’s true of everything we try to understand… from our families, to our God.

About a month after this column was published, Geoff Marcy was caught up in a personal scandal and removed from his post at Berkeley. Like the power of the priesthood, of course, one’s state of grace does not impinge on the efficacy of one’s work. But it’s always disappointing when someone so smart can be so in need of correction… and hard to understand how they can act that way.