This column first ran in The Tablet in June 2012

It would be hard to credit a philosopher who had never read Plato, or an expert in literature who was unfamiliar with Sappho or Homer. Every mathematician has learned Euclid’s geometry at some time (usually very early) in their studies; every artist has, at some point, encountered Praxiteles. Yet a science course that spent a significant chunk of its curriculum on Aristotle’s physics would raise eyebrows, to say the least.

Jettisoning the wisdom of antiquity is a characteristic trait that differentiates science from other fields. (And of course it’s one obvious illustration of how Scripture is never a science text.) But if everything we learn from astronomy will inevitably be superseded by later work, then why do we even bother learning the current stuff? 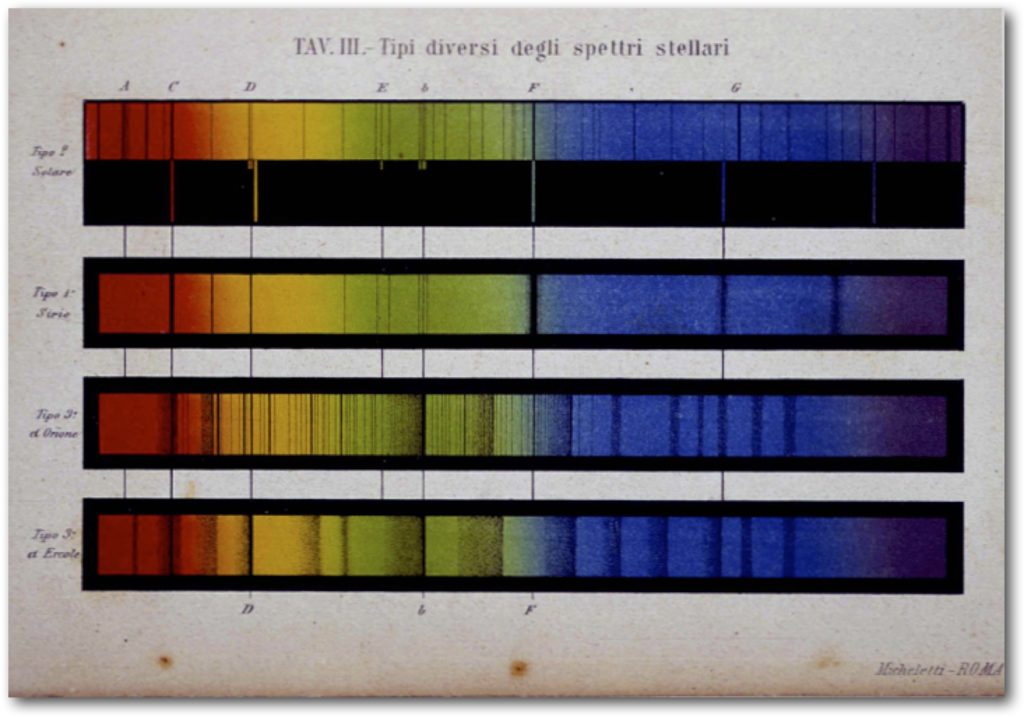 Fr. Angelo Secchi SJ was the first person to classify stars by their spectra… a novel idea scorned by many of his contemporaries. This plate is from his 1877 book on stars.

I’ve had students ask me that; and I was wondering it myself, attending the biennial Vatican Observatory Summer School being held in 2012 at our headquarters in Castel Gandolfo… along with 25 university students from 23 nations, Asia to the Americas. We hold these schools roughly every two years (that was our 13th) to give young astronomers an in-depth exploration of some particularly important aspect of modern astrophysics. Its topic was the science of stellar clusters, with an international faculty under the direction of Douglas Heggie of the University of Edinburgh. The schools eventually produce the next generation of brilliant astronomers; two alumni, Nate Bastian and Mark Gieles, were instructors at this one.

Clusters in gas clouds are the birthplaces of new stars. (But not all stars are born in clusters, I have learned.) The cluster stars spread into the galaxy when the gas clouds dissipate. (But new numerical models show it’s not quite that simple.)

While these lectures were convincing me that everything I thought I knew about stellar clusters was woefully naive, perhaps the most jolting lesson came from a guest lecture by Ileana Chinnici, a historian of astronomy at Palermo Observatory. Speaking on Angelo Secchi, a nineteenth century Jesuit priest who pioneered stellar spectroscopy, she put his work in the context of his contemporary astronomers who were skeptical of the very motivations behind his new-fangled “astrophysics”.

To them, astronomy meant measuring star positions, not futile attempts to determine the actual physics operating on those stars themselves. “Astronomy determines the motion of heavenly bodies… everything else is not properly of astronomical interest,” wrote Friedrich Bessel in 1832. A generation later, Otto von Struve intoned, “Astrophysical investigations are far from the standard of scientific accuracy… God forbid that astronomy should be carried away by this fascination with novelty!”

Yet we now know that this dichotomy is false. Bessel’s math and Struve’s observations let us calculate not just how the stars move but the masses that control their motions. Combined with using star colors (Secchi’s spectroscopy) to determine the chemistry of those stars, today we can model how those cluster of stars formed and evolved in time. Globular clusters, for example, date from the origins of the universe and let us trace how things have changed since the Big Bang – a way of thinking about space and time that would have boggled Struve and Bessel – and Secchi, for that matter. The irony is that so many great astronomers of the 19th century were afraid of this novelty. But such novelty is the lifeblood of science.

It’s not that their old science was wrong; but it was incomplete. And we wind up using new terminology and new tools to express what Bessel (and indeed Aristotle) were trying to say. In the process, we can discover elements of their work that they themselves didn’t realize, and couldn’t have in their time. That’s no different from reading Sappho with modern feminist sensibilities, or studying Plato in light of how his ideas shaped 2000 years of subsequent thought.

This month we just completed our 15th summer school…