As everyone has been told, countless times this month, July 20 – the 21st, in Rome – marks the 50th anniversary of the landing of the Apollo 11 astronauts to the Moon. Here are a few lunar topics probably not covered by most folks remembering that event…

Pope Paul VI seeing the moon through the finder of our Schmidt telescope, July 21 [Rome time], 1969

I saw a photo of Pope Paul VI looking at the Apollo 11 Moon landing through a telescope. Why didn’t he watch it on TV like everyone else? For the Moon landings, world leaders were invited to address the astronauts on a world-wide television link-up, and the Pope read his greetings (in front of a TV) from the Vatican Observatory dome in Castel Gandolfo (in the gardens near the Pope’s summer palace). In fact, the system of geosynchronous satellites to send TV pictures live around the world was still pretty new; those of us of a certain age can remember the Beatles introducing All You Need is Love on one of the first Europe/North America TV link-ups, in 1967.

Pope Paul watched the moon landing on TV from our telescope dome, then addressed the astronauts from there

Afterwards, the Pope looked at the Moon through the small finder scope attached to that telescope; that’s the picture all the papers ran. The big telescope itself was actually a camera designed to photograph the sky, with no eyepiece to look through. The Pope’s view of the Moon through the finder scope was delightful, no doubt, but there was no way that even the biggest telescope on Earth could have seen the astronauts themselves. Interestingly, NASA has an orbiter around the Moon now that has imaged the Apollo sites; the landers are still there!

(Here’s a link from RAI Italian television, reviewing his visit to the telescope domes; most of it is in Italian, but his address to the astronauts, in English, begins at 4:19)

Is there religion on the Moon? Theological discussions of God’s imminence and transcendence aside, the Apollo astronaut Buzz Aldrin did bring with him the communion species from his Presbyterian church near the NASA center in Houston. 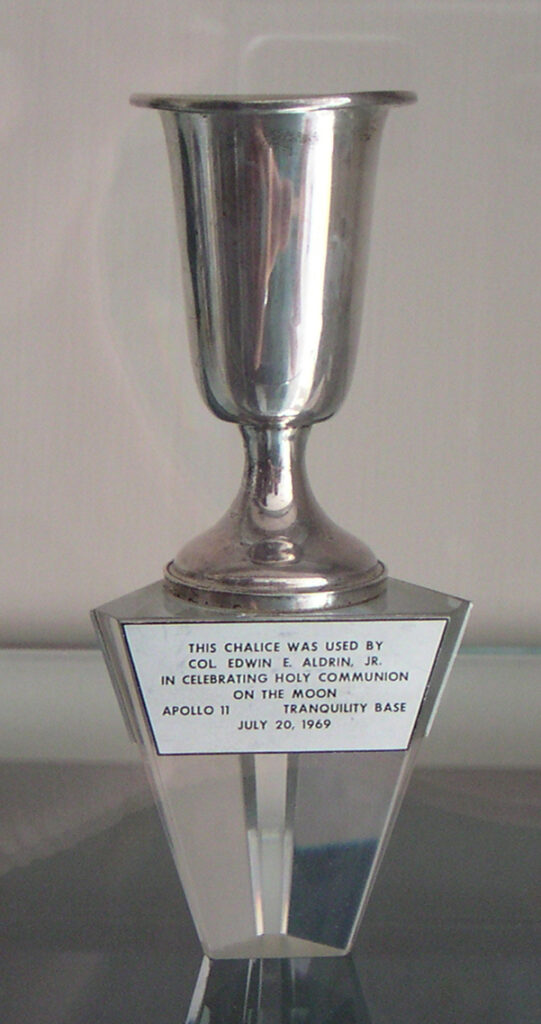 There are lots of interesting religious questions that come up when you leave Earth and travel to another planet. The Jewish and Islamic calendars are based in part on where the Moon is in the sky; what do you do when it’s not in the sky, but under your feet? It’s easier for Christians; one principle of Pope Gregory XIII’s reform of the calendar in 1582 was to set the date of Easter and other religious holidays not by the position of the Moon but by a mathematical formula anyone can use, anywhere in the world (or off it). It only roughly approximates the “first Sunday after the first full Moon of Spring.”

The Jesuit who helped explain this formula, Christopher Clavius, has a crater named for him on the Moon. So do 35 other Jesuits. How did that happen? The men who made the telescopic map defining the nomenclature we use today were themselves Jesuits. (And they named the Moon’s most prominent crater for Copernicus – this, in Rome, less than 20 years after the Galileo trial.)

Did we really go to the Moon, or was it all faked? I have touched the rocks. I have looked at them through petrographic microscopes, and measured their properties in my lab. They are distinctly different from any Earth rocks, different enough to insure that they are not from this planet. And, for all our work over the last 40 years, we still can’t quite agree about how they were made. If they were faked, whoever did it was cleverer than any of the geologists who have worked on them ever since. 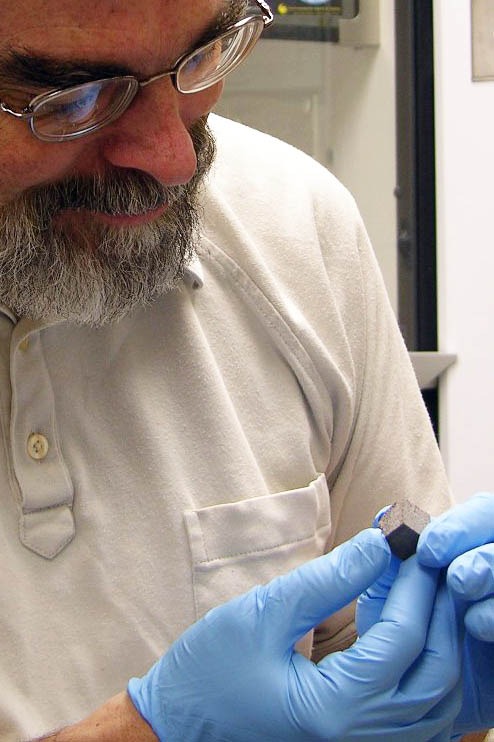 When my colleague Dan Britt got some Apollo samples to measure, he let me hold one…

That puts me in a privileged position, I know. I believe in the Moon landings because I have seen; most people have to be blessed with believing even though they haven’t seen the direct evidence like I have.

Perhaps St. Thomas (the one who doubted) was the first scientist… not because he refused to believe without evidence – a lot of people are quick to doubt – but because when he finally did touch the evidence for himself, he was able to alter his understanding.