This column first ran in The Tablet in May 2013 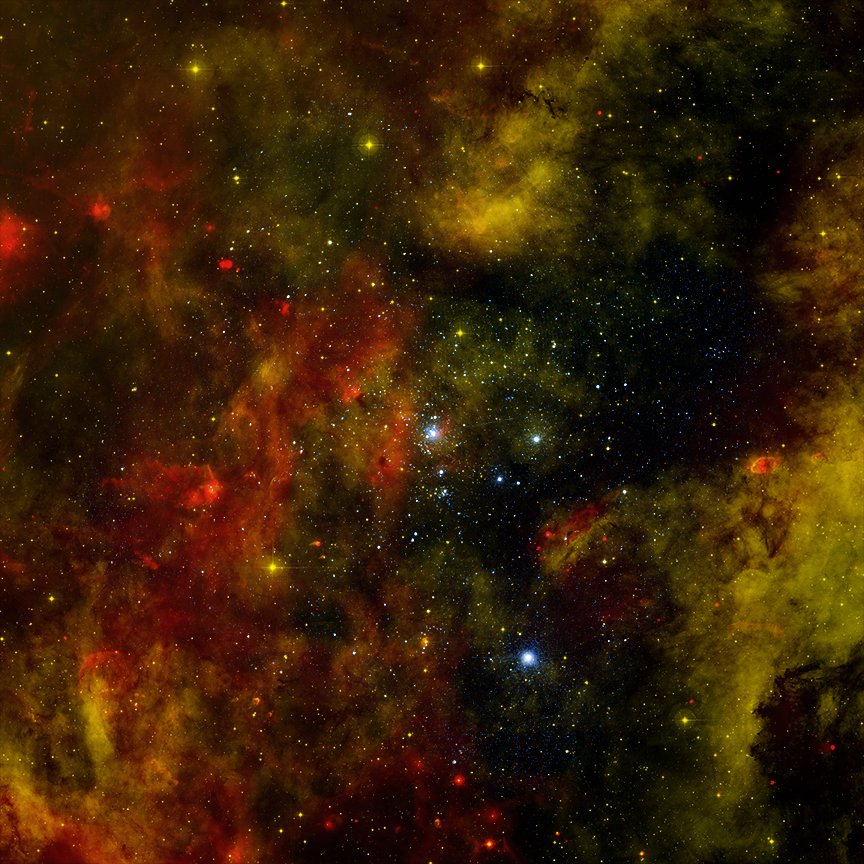 Cygnus OB-2 courtesy of the Chandra X-ray Observatory Site at Harvard. In this image, X-rays from Chandra (blue) have been combined with infrared data from NASA’s Spitzer Space Telescope (red) and optical data from the Isaac Newton Telescope (orange).

Cygnus OB2 is an association of perhaps a thousand young, massive stars, some of them a hundred times more massive than the Sun and a million times brighter, immersed in a much larger molecular cloud known as Cygnus X. Because it is so close to us (“only” 4700 light years away) we can study Cygnus OB2 in detail, comparing model predictions about the formation of such massive stars with actual observations. These studies might help us understand how such stars are born not only in our galaxy but also in more distant galaxies.

But that mass of data can overwhelm our understanding. It’s impossible for any one astronomer to keep track of all the latest developments. And so in May, 2013, we held a workshop at the Vatican Observatory in Castel Gandolfo where two dozen scientists could compare notes about this star formation region. “This is a meeting of the blind men talking about the elephant,” one participant mused. Every scientist had a different set of data, and a different take on how the cluster of stars was put together and what makes it tick. That variety, of course, is what makes small workshops like this so important.

By an odd coincidence, earlier that week I had come across a photograph from a similar astronomy workshop, held at the Vatican in 1957. The participants 55 years ago are now names that fill our astronomy books: Lemaitre and Hoyle respectively invented, and named, the Big Bang; the Oort cloud is where comets reside; the Schwarzschild radius defines a black hole; the Spitzer Space Telescope is one of the instruments observing Cygnus OB2. 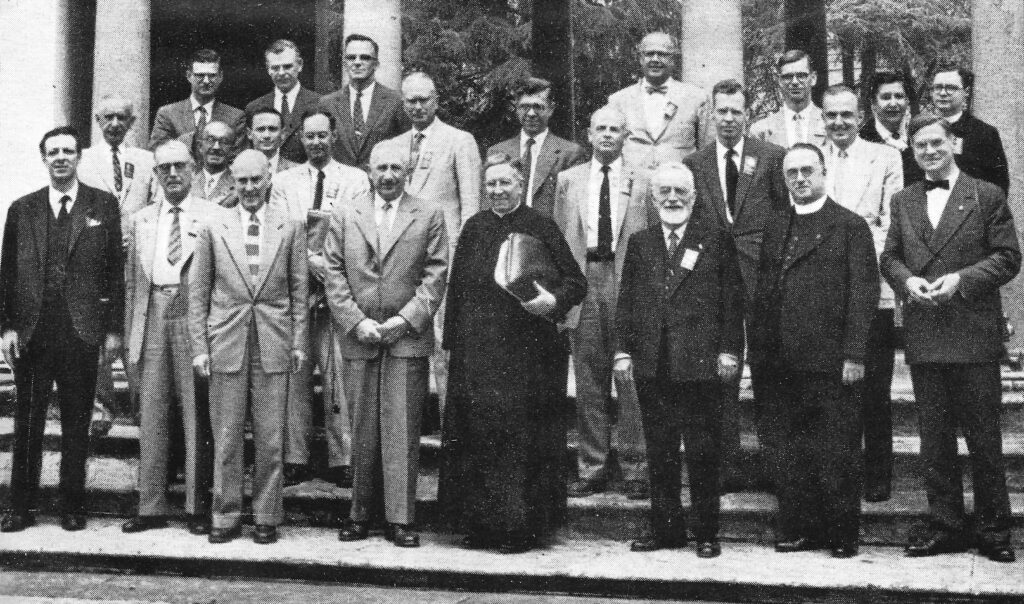 The attendees of the 1957 Vatican conference on Stellar Populations. See below.

Some differences between the workshops were notable. None of the 1957 astronomers were women, unlike a third of this year’s current meeting, including one of its organizers. Nearly all the 1957 participants had northern European names; the current workshop was co-organized by a Spaniard living in Chile and included participants from eastern Europe, which would have been impossible for a meeting held at the Vatican during the Cold War.

But other aspects remained the same. In 1957, the participants compared notes about the relative populations of stars in order to get at much bigger questions ranging from how the chemical elements in those different stars were formed, to the bigger picture of how the universe itself was made. By bringing together experts in diverse fields to sit and talk, each side learned important things going on in places outside their normal field of view, and new collaborations emerged. In the same way, one participant here commented, “Every paper I have ever published started out as a conversation in a setting like this.” 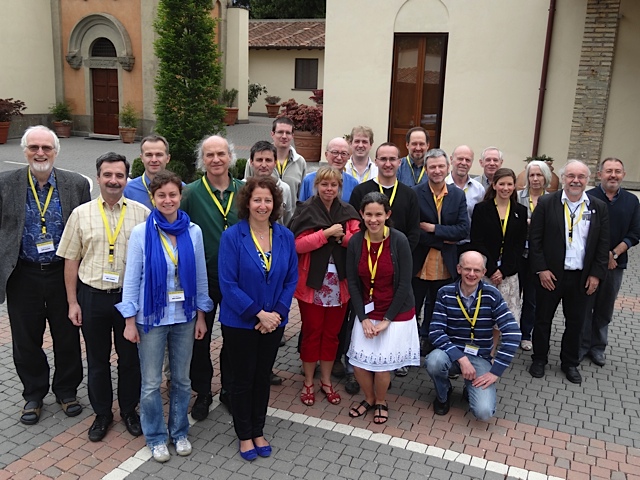 Attendees of the 2013 conference, courtesy of Fernando Comeron (second from left).

Will someone fifty years from now look at our group photo with the same sense of awe? Probably not. The field of astronomy has grown large enough now that it is no longer dominated by a few big names. (Roman paparazzi have a similar problem: with so many celebrities today they can’t keep track of who’s worth photographing anymore.) But that does not dilute the genius or the accomplishment of the modern participants… any more than naming 800 martyrs as saints (as Pope Francis did that same month) somehow dilutes their sacrifice or accomplishment. As saints and scientists we are the product of those who have come before us, standing on their shoulders; and our duty is to lift those who will follow.

Appropriately, the attendees at our workshop this month ranged from recent PhDs to Per Olof Lindblad, now 85 years old. I noticed him examining the photograph of the 1957 meeting. “I would have been 30 years old then,” he mused. And then he pointed to a man in the front row of that photograph. “That was my father.” 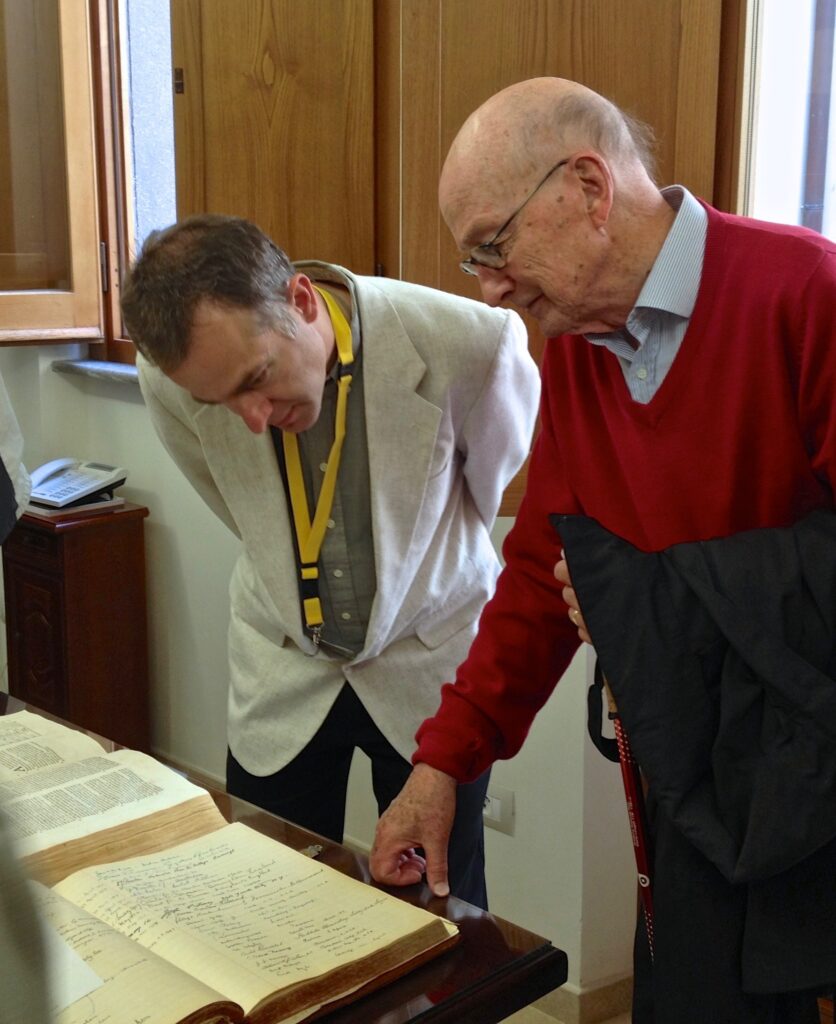 Olof Lindblad, pointing out the signature of his father in our visitors’ book

Added, for the fun of it… so, who were the folks attending that 1957 meeting? Here’s the cheat sheet: 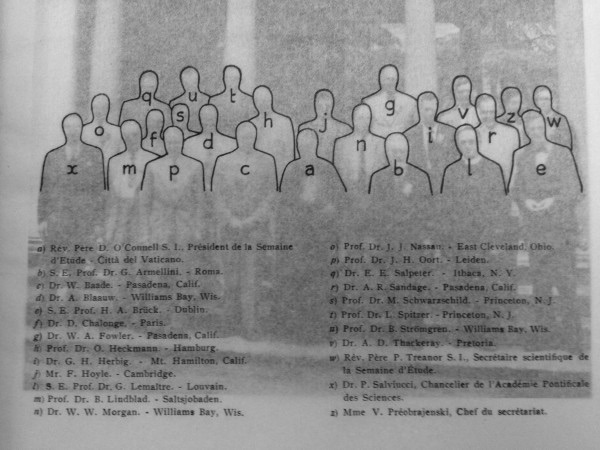 c. Walter Baade: (1893 – 1960) By observing stars in the Andromeda Galaxy he invented our present Population I and II system; his observations of Cepheid variables there recalibrated our understanding of the size of the universe

g. William Fowler: (1911 – 1995) Won the Nobel prize in Physics in 1983 for his theories of how elements are made by nuclear reactions inside stars

m. Bertil Lindblad: (1895 – 1965) Explained certain orbital resonances (“Lindblad resonances”) and details of the rotation of galaxies; such work has ultimately led to the detection of “dark matter”

s. Martin Schwarzschild: (1912 – 1997) The Scharzschild radius derived by him indicates the “event horizon” of a Black Hole

t. Lyman Spitzer: (1914 – 1997) An expert on interstellar dust, he first proposed telescopes in space; the Spitzer Space Telescope is named for him

u. Bengt Strömgren: (1908 – 1987) Determined relative abundances of helium and other elements in stars; devised the Strömgren system of photometric filters

x. Pietro Salviucci (1936 – 1973) Chancellor of the Pontifical Academy of Sciences

(edited to include the 2013 photo, update the date of Dr. Herbig’s death, various formatting corrections)