This column first ran in The Tablet in October 2014

I had been invited to Australia this month [October, 2014] to give a science and religion talk to an association of Catholic professionals, but by the time I arrived in Brisbane my schedule had expanded into seven presentations, from school groups to university colloquia. Three of those groups asked to hear about Galileo. 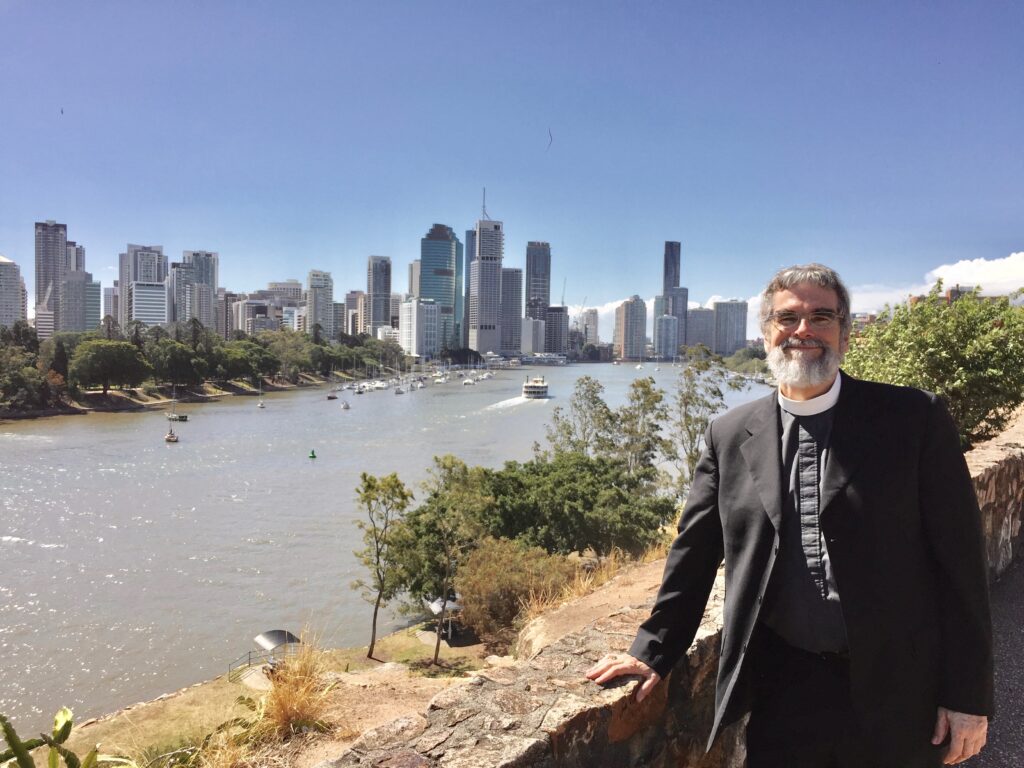 The guy with the beard is NOT Galileo. The city behind me is Brisbane, Australia

What makes Galileo such a touchstone for science/religion debates? Over his 30 year career Galileo was a friend of Popes and princes, Jesuits and Dominicans (at a time when those two orders could hardly agree about anything). His reflections on science and religion have been praised by Popes since Leo XIII. If it weren’t for a few unfortunate months in 1633, he’d be hailed universally as a hero of Catholic thought. But ever since the late 19th century, when the myth of a war between science and religion first captured the popular imagination, Galileo has been cited as hero, villain, and victim of that “war.”

The Galileo story is complicated and confusing. Check your favorite on-line bookseller and you’ll find 400 different Galileo biographies, all of them with a different slant as to what really happened. I certainly don’t have the answer; what’s more, I’ve found that even an hour’s presentation can’t communicate anything like a complete picture of what happened. Most people only have a sound-bite understanding of the issue. They want sound-bite answers. So, as a service to my fellow Catholic science popularizers, here are three sound bites that have worked for me:

Everything you know about Galileo is probably wrong; but the truth doesn’t make the Church look any better. No modern historian thinks the Church was simply being anti-science when it put Galileo on trial in 1633. But her actual reasons are still hotly debated. Was it because Galileo had insulted the Pope? Was his philosophy in some subtle way thought to be dangerous during unstable times? Was it all wrapped up in the politics of the Thirty Years’ War, which was entering a climax just as Galileo published his most controversial book? In one sense it doesn’t matter… none of those reasons justify declaring that his work (lauded just a few years earlier) made him guilty of “vehement suspicion of heresy.” It looks like Pope Urban VIII used his religious authority over Galileo as a way of dealing with non-theological issues, be they personal injuries or political expedience. That was wrong.

When Bellarmine and Galileo debated, Galileo was the better theologian, but Bellarmine was the better scientist. In 1616, seventeen years before his infamous trial, Galileo was called before Cardinal Bellarmine to explain his views. At that time, Bellarmine had written to a friend that if Galileo could prove the Earth moved, then theologians would merely have to re-interpret passages of the Bible that appeared to state otherwise. “But I do not think he can prove it,” Bellarmine concluded. And given the evidence available at the time, Bellarmine was right. The scientific debates continued for nearly a century afterwards. It wasn’t until the publication of Newton’s laws of physics, whose final edition was a hundred years after Galileo, that science (and the Church) finally understood how a sun-centered system could make sense.

The reason that people always cite Galileo to show the Church suppressing science is that it’s the only example they’ve got. From the medieval universities, where science was first invented, through pioneer clerical-scientists like Gregor Mendel and Angelo Secchi, to Fr. Lemaitre’s Big Bang theory, the Church has supported science – sometimes literally, as with telescopes supported by the roofs of churches and Papal palaces.

But her support is also social. Our Church is proud of her scientists. We even get invited to travel around the world… to give talks about Galileo.

Want to know more about Galileo? Visit our Faith and Astronomy digital library, which has a whole section of dozens of downloadable articles and other materials about Galileo.