This column first ran in The Tablet in May, 2009

Above the Arizona sky the night of October 5, 2008, a faint moving dot of light was captured in the Skywatch telescope. Soon its orbit was calculated, showing that this newly discovered asteroid, 2008 TC3, had only 20 hours left before it was to hit the Earth. Two dozen teams of astronomers made every possible use of that time, measuring its colors and changing brightness as it spun across the sky, and further refining its orbital path. On the morning of October 7 (local time), a tumbling lump the size of a white van struck the sky over northern Sudan. 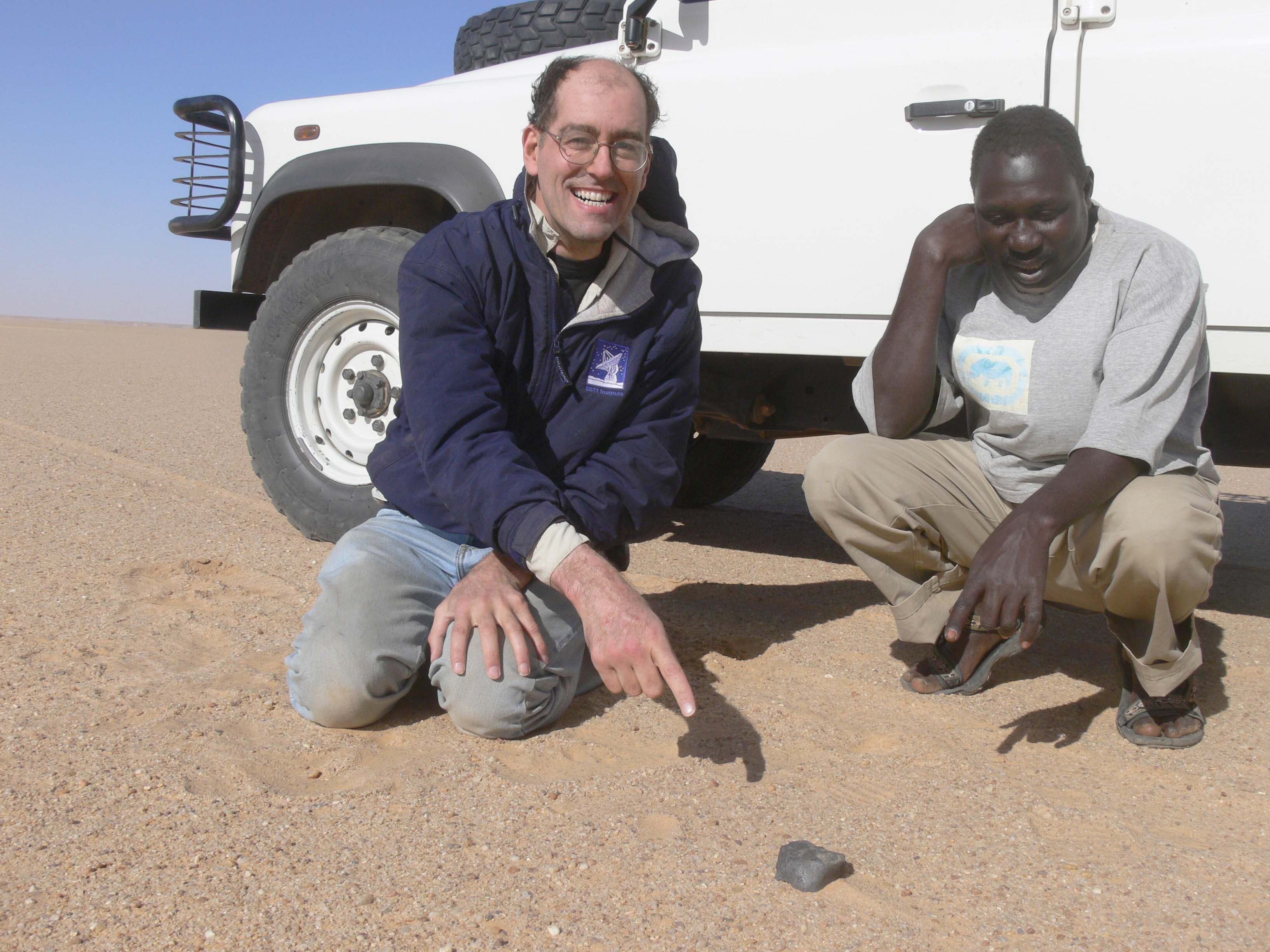 Peter Jenniskens of the SETI Institute with his Sudanese driver, finding a piece of the Almahatta Sitta meteorite. Photo credit, SETI Institute

Seven months later, in a quiet conference room in Prague, Peter Jenniskens told a rapt audience of bolide and meteorite specialists (I was one) the story of what happened next. Through e-mails to friends and colleagues, this Dutch-American meteor specialist had made contact with a geologist at the University of Khartoum, Muawia Shaddad; within days, Jenniskens was there, giving a seminar on how to go looking for meteorites.

They had a good idea of where to start. The fireball it made when the object struck the Earth had been recorded by military and weather satellites, and at sunrise dozens of worshippers coming from morning prayer had snapped images with their cell phones of the dust train it left behind in the sky. Within days, Jenniskens and Shaddad, and a busload of eager students from the University, were in the northern desert of Sudan. They recovered hundreds of meteorites. It was the first time an object discovered in space was seen to hit the Earth; and one of the few times that meteorites have been recovered from a well-tracked fireball.

We were in Prague celebrating a similar event. Fifty years earlier, on April 7, 1959, a set of cameras set up by Czech astronomers had caught the track of a fireball; Dr. Zdeněk Ceplecha and his colleagues calculated its path, and showed that the meteorite could be found near the Czech city of Příbram – the first such successful prediction. 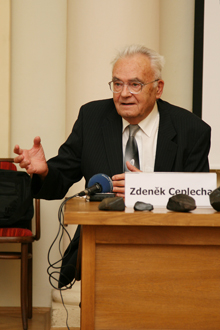 Dr Ceplecha in 2009; photo from the website of the Czech Academy of Sciences, http://abicko.avcr.cz/sd/novinky/hlavni-stranka/news_0278.html

Meteoroids are chipped from asteroids, get perturbed into Earth-crossing orbits, and eventually hit our atmosphere, burning away most of their mass in a spectacular “bolide”. But while each stage can be well studied – the path of the meteoroid in space, the fireball in the air, the meteorite on the ground – this is the first time we’ve been able to put all the pieces of the same event together. Now we can say, in at least one case, that this kind of meteorite comes from that kind of asteroid, and makes this sort of fireball coming through the air. But the discussion among scientists from so many different fields also showed us how each group of researchers has been approaching the common problem with sometimes inconsistent assumptions about these objects we are studying.

Dr. Ceplecha, now 80 years old, was an enthusiastic participant in the conference. So were scientists from Canada and Russia, Japan and New Zealand, Tajikistan and Chile. Ceplecha’s work had been done during the height of the Cold War and all the problems that meant to Czech astronomers; and echos of those times persist, as many of the instruments detecting the 2008 TC3 event were put in place to detect treaty-violating nuclear tests.

Meteor science is not a big money-maker. Nor do its practitioners feature in Hollywood blockbusters. Indeed, it seemed odd at first to hear that there even were meteoroid observers in impoverished central Asia or (to use the inevitable cliché) “war-torn” Sudan.

What could be bringing us all together? Amazement and wonder at a light in the sky. And a curiosity about the star dust it was delivering… from which we all have come, and unto which we all return.

Zdeněk Ceplecha died in December, 2009, just seven months after this conference in his honor.