This column first ran in The Tablet in September 2010

Fifty years ago, a young radio astronomer named Frank Drake got time on the new radio telescope at Green Bank, West Virginia, to listen in for intelligent signals from two nearby sun-like stars. It was the birth of SETI: the Search for Extraterrestrial Intelligence. 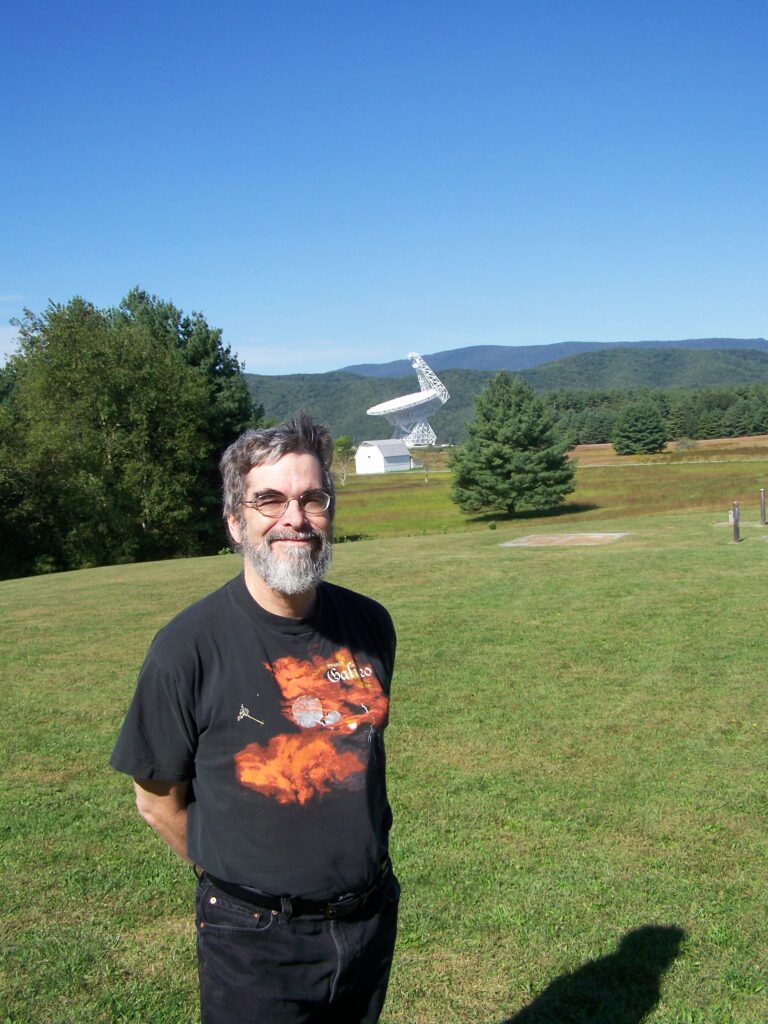 Bill Higgins attended the 2010 meeting with me, and took this photo of me in front of the Greenbank Radio Telescope

Within a year he had presented, at a seminar in the observer’s lounge of the Green Bank observatory dormitory, what has come to be called The Drake Equation: a string of probabilities that would have to be determined to calculate the odds of finding an extraterrestrial civilization. How many stars have planets? How many planets have life? What are the odds that the life is intelligent in the sense of building radio transmitters powerful enough for us to detect? And what is the typical lifetime of such a civilization before it collapses?

In 2010, I was part of a workshop held in that same lounge on “SETI at 50”. In attendance were astronomers, biologists, cultural historians; Jill Tarter, the head of the SETI Institute who was dramatized in the movie Contact; and, at 80 years old, a vigorous Frank Drake.

What has 50 years of silence taught us? Does the fact that we still haven’t heard anything mean that such civilizations (like ours) don’t survive very long? Or just that they don’t use radio anymore? On Earth, television is being replaced by cable and the internet, and even airport and military radar operates at a lower power than 50 years ago. For that matter, we didn’t even know about electromagnetic waves until 150 years ago. Maybe communication is done via some medium we haven’t even discovered yet.

Still, in 1960, it was plausible to imagine a universe with billions of ancient civilizations communicating by radio, whose signals would boom through our receivers no matter where we looked. We know now that this is not true. That in itself is significant; this changes our view of the universe. What remains is the famous paradox expressed even earlier than SETI, in 1950, by the Italian physicist Enrico Fermi: with so many possible abodes for life in the universe, why aren’t they here? If nothing else, this strongly suggests that simple faster-than-light technology really is physically impossible. That too is a powerful physics result.

Of course there are other possibilities. Perhaps we’re members of a cosmic Zoo, kept unaware of the observers for our own good (and for their purposes of studying us in our natural state). Or perhaps intelligence is not useful in a Darwinian state; after a race is smart enough to get technology, it collapses into an unintelligent miasma of watching celebrities on the internet, and stops exploring or reaching out from its comfortable home planet. Maybe the aliens are afraid of our poisonous oxygen atmosphere.  Maybe travel is only possible via the occasional wormhole, and we don’t happen to be living near a cosmic Metro station. Or maybe the problem is simply that we’ve only looked into a glassful of water from the cosmic ocean of possibilities.

Or perhaps, indeed, we are all alone. Dr. Ian Morison of Jodrell Bank has argued that Earth has had a very unusual collection of circumstances that allowed for the rise of intelligent life. If not unique in the history of the universe, we could well be the only intelligence in our galaxy right now.

Today, the SETI Institute carries on with private funding from Silicon Valley billionaires. In the astronomy community, SETI researchers are mostly known for developing the powerful data-processing tools that let them paw through ordinary radio telescope observations, looking for hints of intelligent signals. Like Shaker craftsmen, they are tolerated as gentle souls with useful skills, if somewhat unorthodox beliefs.

94  |  Across the Universe: Jabberwocky and the Curious Cat