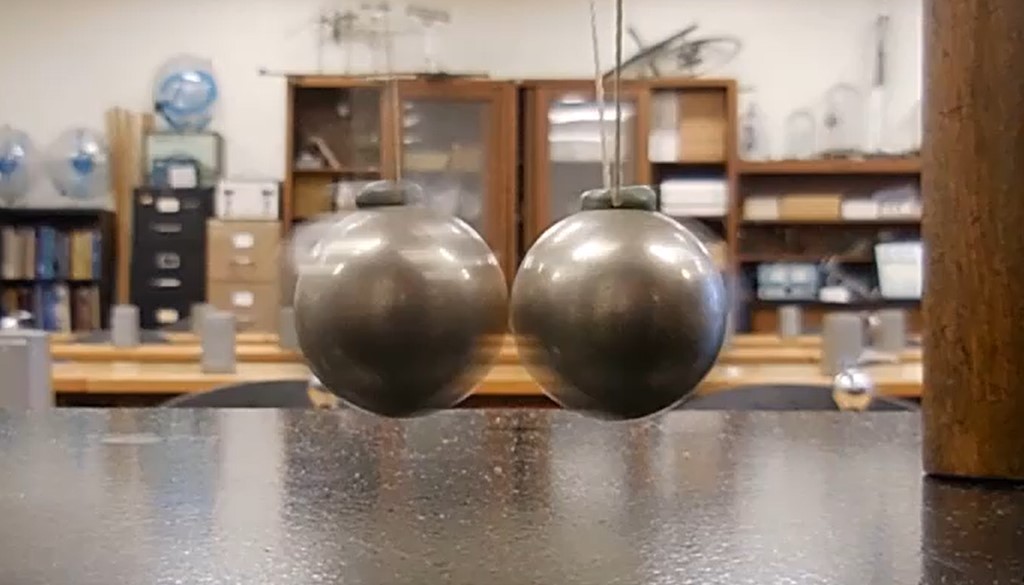 Many exoplanets (planets orbiting stars other than the sun) are detected by the “wobble” they induce in the stars they orbit.  That “wobble” is an illustration of Isaac Newton’s Third Law of Motion:

For every action there is an equal and opposite reaction.

Newton’s three Laws of Motion are the basics of physics.  The first law, the inertia law, that objects retain their state of motion, is not too hard to visualize.  Think of a bicycle wheel that is free to spin—if it is not touched, it stays still; if it is spun hard, it will keep spinning, at least for quite a while (and if we imagine it to be better lubricated it will spin longer).  The second law, that acceleration is proportional to force and inversely proportional to mass, is pretty easy to visualize, too—the harder you push a grocery cart, the more dramatically it moves; but the more laden with groceries it is, the less it responds to your push.

A nice device to demonstrate this is something called a “Newton’s Cradle”.  It consists of identical balls, suspended by strings such that the balls can collide with one another.  A two-ball cradle shows the Third Law nicely.  Check out this 75-second video:

When the balls collide, the moving ball (A) strikes the resting ball (B).  A obviously exerts a force on B—it causes B to start moving.  B obviously exerts a force on A—it causes A to stop moving.  The forces are obviously opposite, since one ball is stopped, and the other is started.  The forces are obviously equal—B takes off with the same speed that A had prior to the collision.  And as we can see in the video, this holds true whether the balls are moving dramatically or hardly at all.

What holds true for forces between balls in a Newton’s Cradle has been found to hold true for forces everywhere, even between stars and planets elsewhere in the universe.