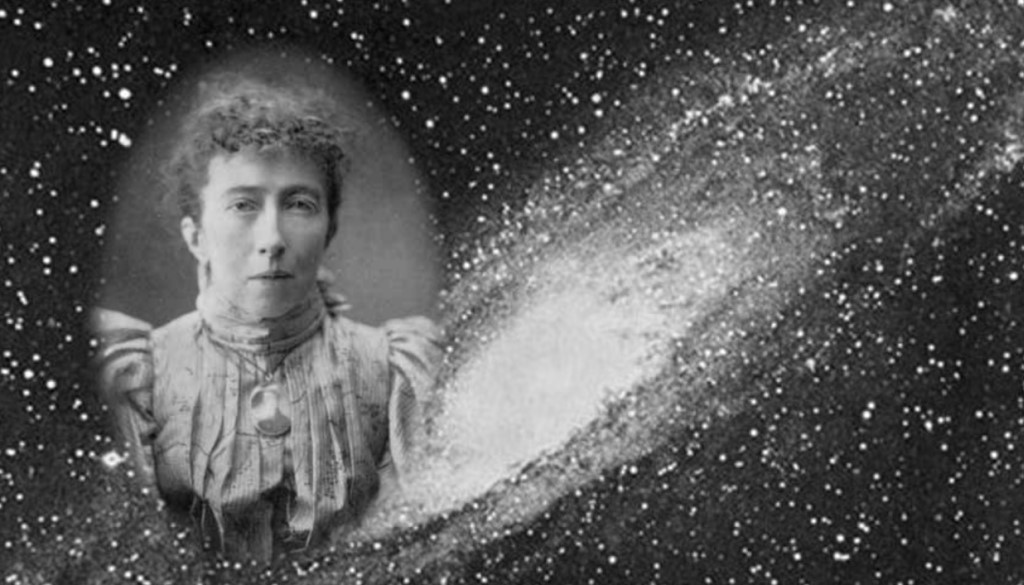 Do you know the name Agnes Mary Clerke? Hers is a good name to know. Clerke (who was born on 10 February 1842 in Skibbereen, County Cork, Ireland) was a remarkable historian of astronomy, writer, linguist, musician, and more. In part because she grasped scientific ideas readily, and in part because of her language skills (she was fluent in Latin, Greek, German, French, Italian and Spanish, as well as English; at one point taught herself a reading knowledge of Portuguese in six weeks) she could keep up with scientific publications from, and maintain correspondence with, astronomers internationally. She did some observing herself, but what she was extraordinarily good at was digesting and communicating scientific information—so she helped astronomers communicate with each other, and with the public.  And what was extra helpful was that she got along with everyone; since some astronomers did not get along with each other, that eased communication greatly.

She wrote a number of significant books on astronomy, including:

These are worth reading even today, when some of the science in them is out of date. For example, Clerke ended up on the wrong side of the debate over the nature of “spiral nebulae” (like M31 in the constellation of Andromeda). The debate was whether

The debate went back and forth for years, but in 1888 the English astronomer Isaac Roberts obtained a high-quality photograph of the Andromeda nebula.  He wrote:

Here we (apparently) see a new solar system in the process of condensation from a nebula—the central sun is now seen in the midst of nebulous matter which in time will be either absorbed or further separated into rings.

Roberts’ work convinced many that “spiral nebulae are galaxies like the Milky Way” was the wrong view. Agnes Clerke was one person he convinced.  She wrote:

The question of whether nebulae are external galaxies hardly any longer needs discussion. It has been answered by the progress of discovery. No competent thinker, with the whole of the available evidence before him, can now, it is safe to say, maintain any single nebula to be a star system of coordinate rank with the Milky Way.

Well, Clerke and Roberts turned out to be wrong on that!

Clerke also wrote on topics other than astronomy.  She wrote a book titled Familiar Studies in Homer.  She wrote magazine articles on topics ranging from “Brigandage in Sicily” to volcanoes to the Congo to needlework to Scandinavian antiquities to Radium.

As you might guess from her name and place of birth, she was Catholic. In 1893 she was awarded the Actonian Prize, a prestigious award given every seven years for the best writing on “The Benificence of the Almighty” as illustrated by discoveries in science. Mary Brück, her biographer, writes:

Agnes Clerke’s award of the Actonian Prize in 1893, which made her a recognised figure at the Royal Institution, coincided with the start of researches into the liquefaction of gases at the Royal Institution, for which Sir James Dewar became widely known. Dewar was the inventor of the vacuum flask named after him with which, in 1894, he succeeded in freezing air. Agnes Clerke took a keen interest in Dewar’s work and attended all his lectures and demonstrations….

Dewar’s experiments required massive and enormously costly refrigeration machinery, much of it provided out of a large sum of money donated to the Royal Institution in 1895 by an American benefactor, Thomas G. Hodgkins, for the support of ‘investigation of the relations and co-relations existing between man and his Creator’—a gift very much in the spirit of the Actonian benefaction. In addition, in recognition of his successes, Dewar became in 1899 the first recipient of the Hodgkins gold medal of the Smithsonian Institution of Washington. It was decided that the cryogenic researches at the Royal Institution which flowed from this benefaction should be placed on record in the form of a Hodgkins Trust Essay. Agnes Clerke was invited to do this. Her eighteen page essay, entitled ‘Low Temperature Research at the Royal Institution 1893–1900’, and illustrated with photographs of Dewar’s historic apparatus, reviewed the history of the subject with particular reference to Dewar’s contributions (in about 70 publications) and discussed the chemistry and physics of matter at low temperatures. It also included an account of the recent discoveries of the inert gases [Argon, Helium, Xenon, etc.]. The essay, in a field quite outside that with which she is normally associated, is an impressive example of Agnes Clerke’s versatility and application.

Clerke opens the Hodgkins Trust essay with the following:

“In der Schöpfung,” Kepler wrote, “greife ich Gott, gleichsam mit Händen”; and Faraday reflected, “with wondering awe,” on the powers of interrogating nature “given by the Almighty to man.” These great men were no mere transcendentalists. The lofty aspect under which they viewed physical research may indeed be temporarily forgotten, but cannot permanently be lost sight of, for it corresponds to an invincible human instinct. Law formulates intelligent purpose; and the laws of nature are an expression of the Will of God. In tracing them out, man seeks, more or less consciously, the infinite; and his capability of tracing them is derived solely from the analogy of his mind with the Creative Mind, which designed a universe assumed by the necessities of thought to be a “cosmos”—an orderly arrangement, such as his faculties can apprehend. Were it unplanned, or planned according to a method incomprehensible by human reason, science would have no locus standi: life should be conducted on purely empirical principles. As a fact, however, we find the world essentially intelligible; and, by striving to enlarge the limits of its intelligibility, we promote the purpose of the Creator in placing us there, and, following in the track of His primal conceptions, bring our inchoate ideas more and more into harmony with them.

Brück sees in this the Thomism promoted by Pope Leo XIII, writing “though she does not use formal philosophical terminology in her cosmology, Agnes Clerke appears always mindful of St Thomas’ teachings.”

When Clerke died on 20 January 1907, her friend Lady Huggins, who was herself a pioneer in the field of spectroscopy, wrote an obituary that was published in The Astrophysics Journal.

Follow the links in this post and check out Agnes Mary Clerke’s writings.  I think you will find it worth your time to have gotten to know Clerke.

4  |  From the V.O. Faith and Science Pages: Thomas Aquinas – On Creation and Time