How does a staunch, combative atheist become a Christian? In our modern culture, there is a false narrative that the exploration of science leads to atheism. Though many can speak of a scientific awakening that led them to an inner atheism (or from my ministerial experience an agnostic mentality that is often presented as atheism), there are also examples of those who, from an atheist presumption, have come to faith in part because of their scientific pursuits. 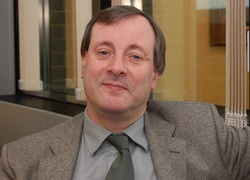 An example of a scientist who was a hard atheist turned Christian is Alister McGrath. In his youth, McGrath speaks of being the kind of atheist that was combative and confrontational when encountering Christian faith. Interestingly, McGrath speaks of his early atheism as almost a cultural wind of the times that many young British intellectuals got caught up in. In some interviews McGrath has given, he will speak of atheism as a “faith,” equating it to a life of aggressive evangelization one would find in different forms of Evangelical Christianity. Though this may sound like the calling card of a “New Atheist,” something awoke in McGrath that moved him from the “faith” of atheism to Christian faith, eventually leading him to pursue priesthood in the Church of England.

One of the astonishing claims of McGrath is that the deeper he studied science, the more he became open to God, summarized in the provocative sentiment that science drove McGrath away from atheism. The heart of this conversion was that, through the complexities of science and its inability to answer questions of meaning and pursue, he began to see that Christianity did not contradict science, but Christianity allowed him to delve deeper into his science. Here is a brief video of McGrath explaining his conversion. 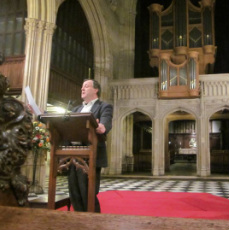 McGrath is currently exploring “natural theology.” Natural theology, as explained in The Gifford Lecture, is commonly understood as exploring an understanding of God from natural reason. However, the field has evolved to be less about developing a “proof” for God in the modern sense of the word, but more of a field that assimilates truth from many fields to help us understand our place in the universe, often reflecting upon the philosophy and theology of beauty in the natural world.

When exploring this approach to theology, one can immediately think of St. Thomas Aquinas’ “proofs” for the existence of God. Again, the word “proof” in the modern sense carries a different type of weight than did St. Thomas when he developed his proofs. As I learned in seminary, the presumed beginning point for St. Thomas was that God exists and from this presumption Thomas then explores reasonable arguments to support this presumption from the natural world.

Modern explorations of natural theology have a similar intuition, seeing how embracing a Christian worldview helps us make sense of the relationship between God, humanity, and the world around us. Central to natural theology is the exploration of how beauty points to a transcendent origin that science is not equipped to explore. This metaphysics of beauty was at the heart of one of the greatest modern theologians in the Catholic tradition, Han Urs Von Balthasar.  To help summarize the complex thought of Balthasar, here is a brief video by Bishop Robert Barron to explain the theology of “The Beautiful.”

As Bishop Barron explains, the beautiful contains three attributes of integritas (wholeness), consonantia (harmony), and claritas (radiance of a thing). When this experience of beauty occurs, Balthasar argues that it causes a type of “spiritual arrest” that names, claims, and sends the one who experiences beauty.

When looking at these categories, there is a part of this definition of beauty that can be explored in a scientific manner. For example, when Balthasar speaks of wholeness and harmony, we can look to mathematical proportions we find in art, architecture, music, and nature. However, those who study these fields know that the ratios and proportions of a thing, no matter how perfect the numbers are, don’t always lead to experiencing a thing as beautiful. This leads to an interesting question to debate: Does wholeness and harmony lead us to the experience of radiance or is there something about a beautiful, radiant thing that happens to express a wholeness and harmony?

In either case, we can see that natural theology and Hans Urs Von Balthasar give voice to the very thing that Alister McGrath has discovered through his study of science: Life cannot be reduced to the material, but there is in the material a beauty and order that points to something beyond the thing itself.

Below is a nice, concise reflection by McGrath on the relationship between faith and science. Enjoy!