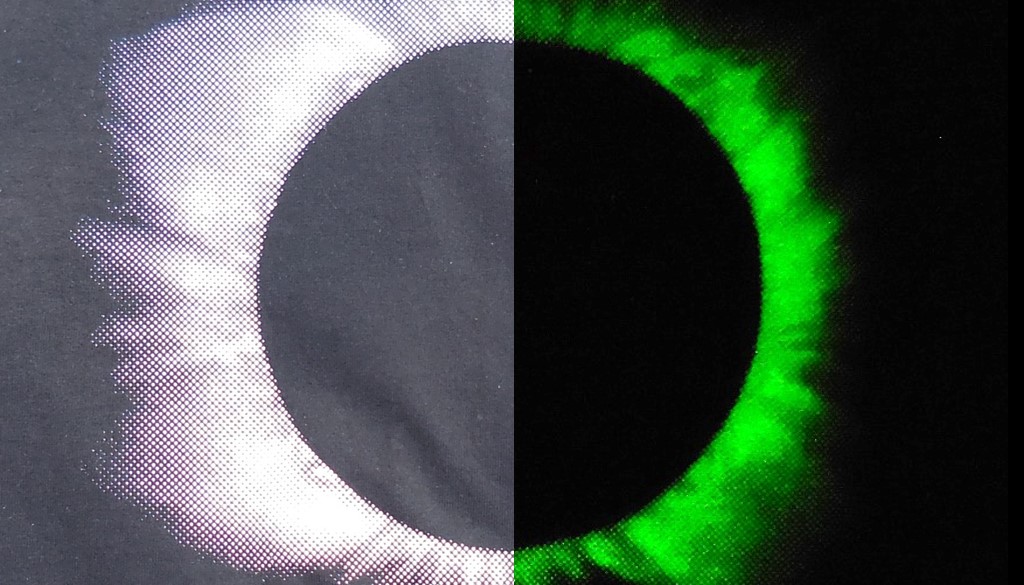 This T-shirt was a gift from Fr. Timothy Sauppé, who is a regular follower of Sacred Space Astronomy, and who was a participant in the inaugural Vatican Observatory Faith and Astronomy Workshop in 2015, and who had a guest posting here at Sacred Space Astronomy a couple of weeks ago.  He is working to organize an event near Bloomington, Indiana for the 2024 eclipse.  Bloomington is well-placed for viewing the eclipse—right in the center of the path of totality, with totality lasting over four minutes.  Fr. Timothy wanted me to check out a possible site for his event, to see if I thought it would be a good place for eclipse viewing, so I met him there, and met various other folks who might be involved.  And he had a veritable gift bag of goodies, including these T-shirts!

The shirt has an image of a total eclipse on the front, and a “concert T-shirt”-style list of locations that the eclipse will pass through on the back (and Bloomington is on the list).  That alone makes it a pretty nice T-shirt.  But then, the eclipse image glows in the dark.  And that, of course, is the best thing about the shirt.  Check it out in the photos below.

Of course, like most glow-in-the-dark things, the T-shirt must be exposed to light for it to really glow.  To get the “glowing” photo below, I had to shine lights on the shirt for a few minutes, then switch off the lights and take the picture.  If I am just out in the dark at night, the glow is not so noticeable.  Nevertheless a 2024 eclipse shirt is a treat to have, and a glow-in-the dark eclipse shirt is even better.

Thanks, Fr. Timothy, from one nerd to another!