Things change. This is obvious. Sometimes change is seen in terms of progress—things are built up, invented, improved, developed. However, oftentimes change means decay.

From a science perspective, all change means decay. According to the famous “Second Law of Thermodynamics”, nature tends towards disorder. A fresh deck of cards goes from order (all cards arranged by number and suit) to disorder with just a few shuffles; additional shuffling never puts the deck back in order. A box in which red and green marbles have been arrayed in an orderly fashion will be thrown into disarray if shaken or otherwise disturbed; additional shaking never puts the marbles back in order.

To counter this tendency toward disorder requires energy, and the use of energy itself generates disorder in that you cannot unburn a gallon of fuel any more than you can unmix the box of marbles with further shaking. You can rearrange the marbles with effort. You can re-freeze ice in a freezer if you pay your electricity bill. You can build and develop, but it costs you, and you must maintain things with vigilance, or they wear down and fall into decay. This is true for life and living things in general: life requires nourishment (food, energy) to grow and sustain itself; without it, death and decay result. 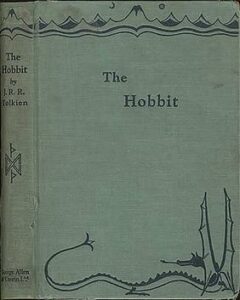 This brings to mind the riddle game from J. R. R. Tolkien’s classic book, The Hobbit. The unpleasant character of Gollum puts a riddle to the hobbit Bilbo Baggins (who Gollum will eat if Bilbo answers it wrongly):

Poor Bilbo sat in the dark thinking of all the horrible names of all the giants and ogres he had ever heard told of in tales, but not one of them had done all these things. He had a feeling that the answer was quite different and that he ought to know it, but he could not think of it. He began to get frightened, and that is bad for thinking. Gollum began to get out of his boat. He flapped into the water and paddled to the bank; Bilbo could see his eyes coming towards him. His tongue seemed to stick in his mouth; he wanted to shout out: “Give me more time! Give me time!” But all that came out with a sudden squeal was:

Bilbo was saved by pure luck. For that of course was the answer.

Time wears down all things. This is very apparent in the area of the Middlesboro impact crater that I discussed in my post from last week. First, on a large scale, the crater itself is wearing down. Geologists have only recently recognized the place as a crater. No doubt, had any geologists been in the area a few years after the impactor struck, it would have been rather obvious that the place was a crater. Then, on the smaller, human scale of Middlesboro itself, some things have obviously been devoured by time. Middlesboro is a place that has seen “ups” and “downs”. In some places, nature has taken back former industrial or military sites: an old iron furnace; a German brewery; a large network of fortifications built during the American Civil War.

Left—a stone pile stands amidst the trees of Cumberland Gap National Historical Park, just east of Middlesboro, Kentucky. According to a National Park Service plaque, this is the remnants of the Newlee Iron Furnace. An iron smelting business operated here from the 1820s through the 1880s. Here once stood a 30 foot stone tower, a complex of industrial buildings, slag heaps, and water-powered machinery, as shown in the 19th-century illustration of the Newlee furnace at right. The furnace’s impact on the area was broad, too; the Park Service estimates that the furnace consumed ten square miles of trees in its sixty years of operation.. 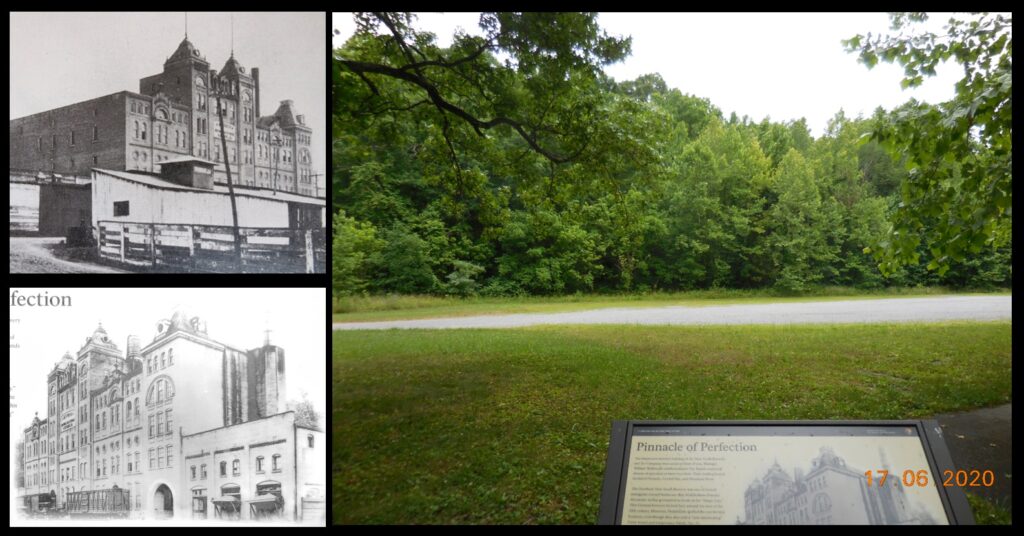 Right—the location of the former New South Brewery in Middlesboro, seen in the photos at left.

But it is not clear that time wears down the heavens. An immigrant from Germany who was working in the area in 1903, a Civil War soldier stationed in the area in 1863, and a native American warrior who passed through the Cumberland Gap in 1603 all would be stunned by what has changed in the area since their time, but all would recognize the sky. The sun, moon, and stars would be familiar to all three. This is not always understood today, because people hear about star birth and star death in classes or books or videos or museums, but do not learn astronomy with their eyes. So they think that the stars visible in the night sky change. But stars live a very long time compared to human history, so in fact the night sky is essentially unchanging.

The great Greek philosopher Aristotle believed that the unchanging heavens must be made of a substance not found on changing Earth—an enduring, changeless substance. The changeable Earth was made of four elements: fire, air, water, earth; the unchanging heavens were made of a fifth element: the “quintessence” or “aether”. Any apparent change in the heavens was, under his view, in fact caused by some non-heavenly phenomenon. Aristotle would have attributed the recent dimming of Betelgeuse, for example, to perhaps some high, small, peculiar cloud that formed and remained in front of the star.

The same ideas, one must believe, recur in men’s minds not once or twice but again and again.

—and no invention is new—

It is true indeed that these and many other things have been invented several times over in the course of ages, or rather times without number.

Following Aristotle, it must be true that somewhere in the distant past, hundreds of thousands of years ago or more, in another iteration of the cycle, it happened that someone who looks just like you was reading a post just like this one, on a website named Sacred Space Astronomy that once existed—and in some far future iteration it will happen again. And this post reading has happened, and will happen, infinitely many times. (If you are wondering what became of the internet technology of the far past… well, catastrophes are part of the cycle, too.) Would Aristotle have ever understood Gollum’s riddle? For Aristotle, time is not such a horrible ogre after all.

Perhaps for this reason people like cyclic universe theories. As one of my students recently said, “cycles are safe”. Things will always carry on in a cyclic universe. By contrast, a beginning to things raises questions. The decay of things suggests an end. That’s less safe. So cyclic theories of the universe, variations on Aristotle’s ideas, keep coming back—things like multiverse theories, which themselves are much like the ideas of Lucretius, who envisioned universes forming and dissolving randomly forever. As one writer has put it,

Like retro fashions, [cyclic universe theories] keep returning, brought back by savvy designers who tailor them to the needs of contemporary cosmological conditions—and the cycle continues.

The Second Law of Thermodynamics, which was developed in the 19th century, dissolved Aristotle’s idea. It ruined cycles. It pointed to a beginning of everything. Even before the Big Bang Theory, scientists were recognizing that science pointed to a beginning. And today cosmologists have shown that even multiverse theories must have a beginning, thanks to the Second Law, a theory on the nature of change itself.