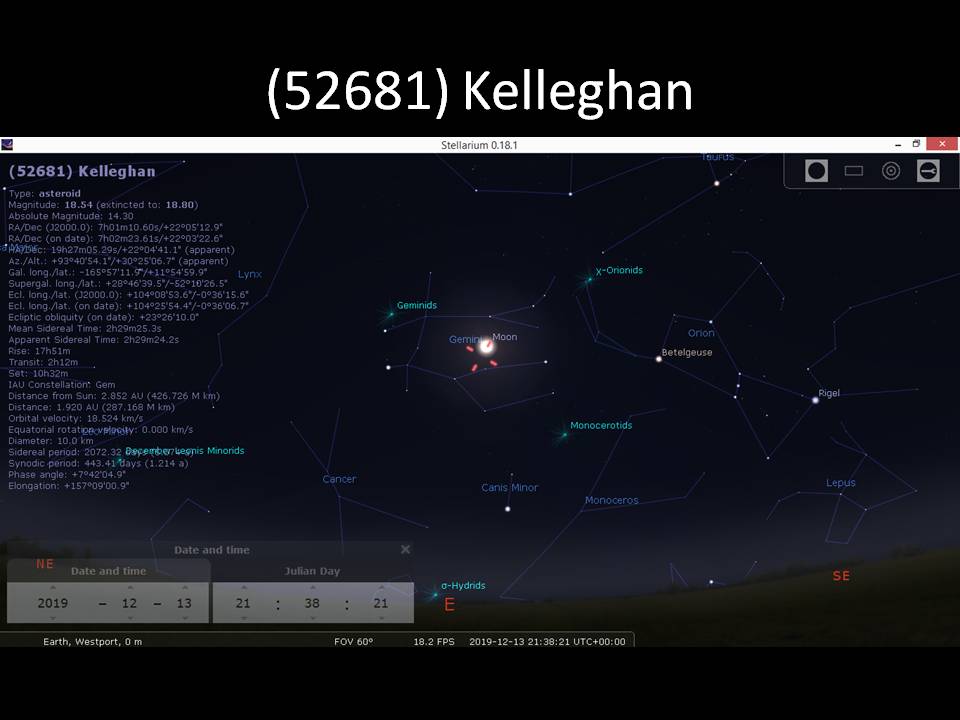 An Asteroid with my name on it becoming real

Look at the screensave above, see that set of red lines? they are pointing to a main belt asteroid which happens to have my name on it. Its pathway in space sets it between the orbits of Mars and Jupiter. This chunk of rock is moving along in space, while also rotating once every 6 hours.

This body is just being itself among the circa 1.9 million other asteroids of similar and larger size. Up there in the main asteroid belt, it is joined by  millions of other smaller asteroids. Just as well that the distance between asteroids is circa 600,000 miles. Therefore spacecraft travelling in the area have plenty of wriggle room.

The asteroid with my name appended is 7 km in diameter !! Imagine that !! it is really mindboggling.

The Story so far

The story began back in March 2019. I got a phone call from John McConnell, an astronomer up in Northern Ireland. He asked me if I was sitting down, ‘yes I said’. John proceeded to tell me that an asteroid in space now had my name on it. He was ringing to congratulate me and to assure me that he would do his best to find out more about it on my behalf. I was absolutely flabbergasted and also truly overwhelmed by the honour.

Soon after that, he sent me the link to the JPL NASA page with its ID number and some technical details. Its title is 52681 Kelleghan (1998 DK 34) The link to its page is HERE

Occasionally during the year, I have mentioned the asteroid with my name on it to children at my workshops. They want to know, what colour is it,? what is it made of? and will I ever go there:-)? Slowly the reality of this asteroid in space with my name on it began to become believable.

In November I went to the Mayo Dark Skies Festival to catch up with friends and listen to some great speakers. After lunch, I was taken by surprise by Terry Moseley another well-known astronomer here in Ireland. Terry began to make an announcement that I soon realised was about 52681. He proceeded to present me with a certificate in honour of the asteroid naming and my outreach work via art.

There was a great reaction from people attending the event and later from friends online. Furthermore the presentation made this distant object become something tangible to me. Subsequently I look up at the area of sky and wonder how I can introduce this asteroid with my name on it into my work. Somehow use this chunk of carbon, clay and rock in space for an educational purpose.

Meanwhile I have written to Eric Elst with some questions and a heartfelt thanks for allowing his discovery to have my name attached to it. Plus in addition both John and myself have put a call out for images of the asteroid.

Am very grateful to the International Astronomical Union, John McConnell, Eric Elst (who first discovered the Asteroid in 1998) Terry Moseley, and the  JPL Minor Planet Centre. My thanks to all involved.