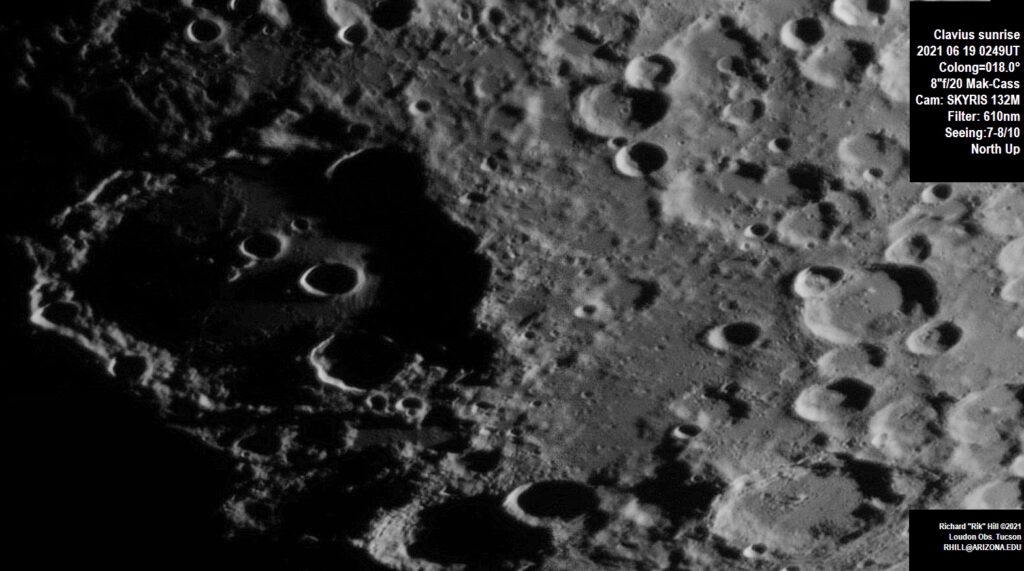 We had a remarkable terminator a couple nights ago. Moretus, Clavius, Tycho, Rupes Recta, Copernicus and Eratosthenes were all on the terminator. The seeing was good so I made the most of these old favorites. Here’s one of them.

This is Clavius (231 km dia.) just coming into the sunlight. The great crater dominates the left side of the image with its interior satellite crater, Rutherfurd (56 km) on the south wall, just catching the first rays on its western (left) wall. At the same point on the northern wall you can see the slightest thread of light from the west wall of Porter (54 km). There are two craters below Clavius, Gruemberger (97 km) on the left and Cysatus ( 51 km) on the right. The big crater to the right of these is Curtius (99 km) and above it is the slightly smaller Zach (73 km)

Notice how the features outside the northern wall of Clavius are softened by a blanket of ejecta? Since Clavius is nearly 4 billion years old it is likely not from Clavius. A better candidate would be Tycho, a little further to the north that is only about 1 billion years old.