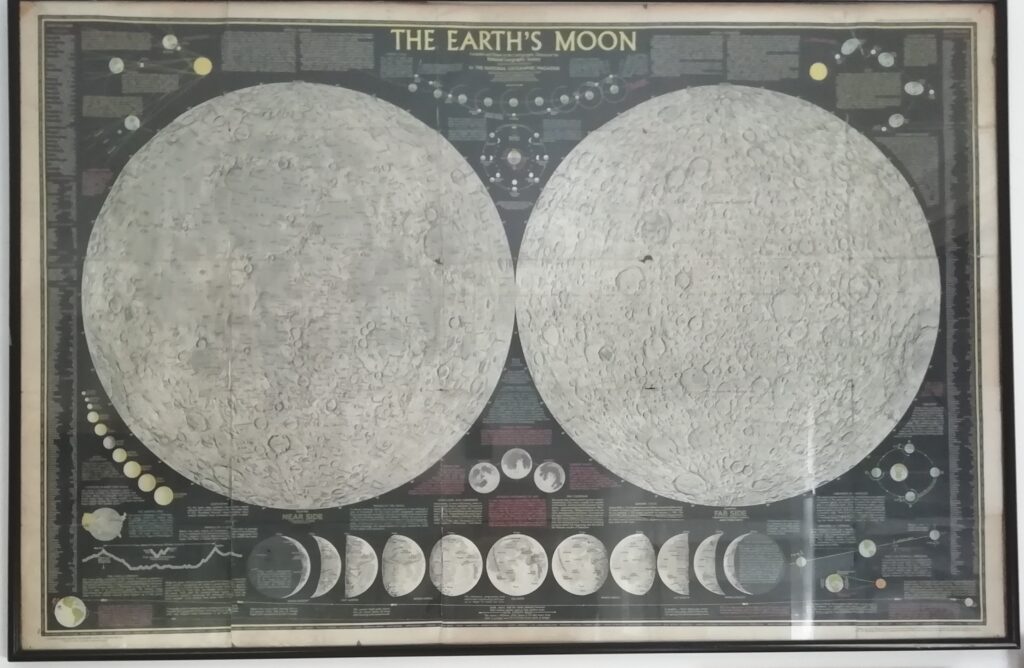 Apollo Moon Masterpiece – This is the wonderful map of the Earths Moon that has hung on my wall for decades. A National Geographic Magazine give away in February 1969. It features the proposed landing sites for the Apollo missions and is packed full of lunar data.

Way back in time when I was just 11 years old I bought myself a copy of National Geographic Magazine. The February 1969 issue came with a large comprehensive moon map. The map is jam-packed with moon information, including the proposed sites for the Apollo Missions. This Apollo Moon masterpiece shown above is a true thing of beauty. This treasure has been on my wall for decades, an inspiration every time I look at it.

The original artwork for the near and far side of the moon was hand-painted by cartographic artist Tibor Toth.   There were no computers in graphic art at the time. The map was designed by Dave Cook who also did most of the writing for the gorgeous snippets of lunar information included in every nook and cranny. Others credited with the work on the map are  Richard Furno, Dave Moore, and Jay Igno. Back then copying and pasting was just exactly that, cutting out text and pasting it down. My work in the ’70s in graphics involved that plus some drawing, a tedious job however nothing as sophisticated as this magnificent work. The relief work and detail on the moons hemispheres by  Tibor Toth is without doubt a glorious example  of the power of drawing.

This lovely 26 day drawing of the moon ( see slide show below) is a good example of how they added information in every available space on the map. Just one of the eleven moon phase drawings across the bottom of the chart. The map shows 22 landed spacecraft, including those that crash-landed on the moon up to February 1969. The side view of Copernicus with the inset cross-section of the grand canyon gives an excellent sense of scale. The image of the moon over the entire United States gives great context to the piece.

The South Pole image states very clearly that there was unsatisfactory photography of that section of the lunar surface back then. There has been a lot of work done since on imaging this area. There are plans by both ESA and NASA to build a moon village and take advantage of the fact that water has been discovered buried deep in craters at the moons south pole.

This week I bought the July 2019 issue of National Geographic Magazine which also came with a moon map. 50 years and a few months later the moon has had many more visits from Earth craft.  Another comprehensive map, albeit somewhat smaller than its 1969 counterpart resides inside the main magazine. The 2019 map is credited to Matthew W Chwastyk NGM staff who put it together from various sources listed on the map. You can see it in the vertical here click to see it online.