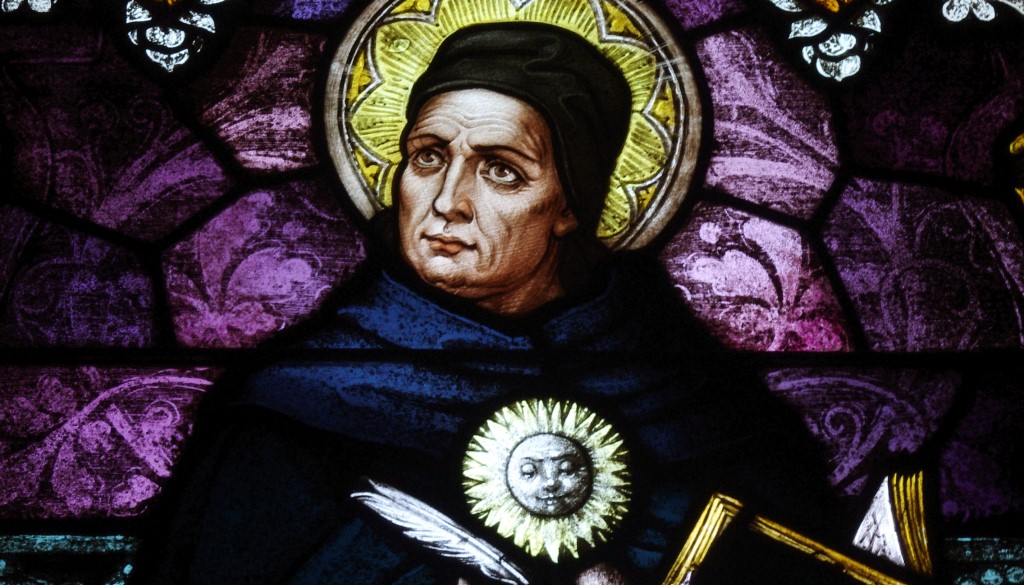 “For most of its history the Catholic Church rejected scientific findings that conflicted with its doctrine.”

Last year, when a correspondent for a major news organization did a story about the Vatican Observatory, the editors felt the need to preface the story with that statement.  Some folks are just set on the idea of the Church rejecting science.

St. Thomas Aquinas could set them straight, using astronomy and Genesis as an example.

In Genesis God says, “let there be lights in the dome of the sky,” and we hear that, “God made the two great lights [the sun and moon]… and he made the stars”.  Were these bodies all lights on a dome, they would all be the same distance from Earth.  The sun and moon, which appear to be the largest celestial lights, would be the largest in physical bulk, too.

But by the 2nd century, astronomers such as the Greek-Egyptian astronomer Ptolemy, had determined that the sun is more distant than the moon, and the stars much more distant still.  Ptolemy said the stars were so distant that the Earth was a tiny point by comparison.  For the stars to appear as they do in the sky, yet be so far away, meant they had to be far larger in bulk than the moon.

Ptolemy’s arguments were convincing to Christian writers.  They did not reject the science.  For example, St. Severinus Boethius mentions the Earth being a point, and mentions Ptolemy by name, in his Consolation of Philosophy that he wrote around the year 525.  St. Augustine, the 5th-century African bishop who has been even more influential to the Christian world than Boethius, discussed stars being very large in his On the Literal Interpretation of Genesis.

Aquinas, the 13th-century Italian theologian who has been as influential as Augustine, likewise considered the question of star sizes.  In his Summa Theologica, Question 70, discussing the Fourth Day of creation, he notes that “as astronomers say, there are many stars larger than the moon.  Therefore the sun and the moon alone are not correctly described as the two great lights.”  To this he answers, “the two lights are called great, not so much with regard to their dimensions as to their influence and power.  For though the stars be of greater bulk than the moon…. as far as the senses are concerned, its apparent size is greater.”

Aquinas did not reject science.  Using the principle that one true thing cannot contradict another, he interpreted Genesis as describing the heavens as they appear to us, not as describing the moon’s absolute size.

But that sort of interpretation was never to be used lightly.  Galileo argued that Earth circled the sun; thus Bible verses that describe the sun as moving describe things as they appear to us.  Church leaders like Cardinals St. Robert Bellarmine and Carlo Conti told Galileo that yes, that interpretation can be made, but, as Conti put it, “this mode of interpreting must not be admitted without great necessity”.  The question was, did the scientific evidence require that?  Was there a necessity?  Church officials considering Darwin’s theory of evolution in the late 19th century used the same logic.

Science changes.  The development of new instruments like the Webb telescope insures that.  By contrast, the principle that one truth cannot contradict another is timeless.  Without a certain caution, we would be reinterpreting scripture again and again in light of this or that scientific idea that failed to stand the test of time.  St. Thomas Aquinas might say that caution, and respect for scripture, is hardly rejection of science.

A version of this post ran in the “Science in the Bluegrass” column that I write for my Archdiocesan newspaper, The Record.